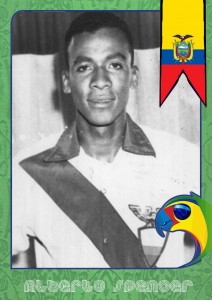 Throughout South American football history there has been a perception that European clubs plunder the continent for the best players. At times players have stayed, with the World Cup instead offering a stage for fame and recognition. There have been players who have done neither and remained relatively unknown outside of the continent even if within South America they have reached legendary status. Once such player is Alberto Pedro Spencer Herrera.

Born 6th December 1937 in Guyas a coastal province of Ecuador to an Ecuadorian mother and a Jamaican father of British descent, who worked for the Anglo-Ecuadorian Oil Company, Spencer grew up in the mining town of Ancón playing football on the streets with his brother Marcos. At the age of 14 he left for the provincial capital Guayaquil and Deportivo Everest to join Marcos. His talent as a striker was obvious and by the age of 16 he was in the first team. Over the next six years he would score over a 100 goals then on a friendly tour of Ecuador he was spotted and signed by Uruguayan giants Peñarol. A legend was about to be born.

Cabeza Mágica [magic head] would stay at Peñarol for a decade, the first eight of those bringing untold success. Seven league titles [with the exception of 1963], back to back Copa Libertadores wins in 1960 and 1961 and a third in 1966 and two Intercontinental Cup wins. The first came in with victories over Benfica, the second in 1966 with two 2-0 victories over Real Madrid in which Spencer scored in both legs. After this victory European clubs, especially Internazionale tried to sign the Ecuadorian but whether a mixture of reticence and Peñarol’s refusal to sell, he stayed. In a decade, Spencer made 510 appearances for Los Manyas scoring a phenomenal 326 goals.

1970 saw a move back to Guayaquil and Barcelona SC for the final two years of his career, winning the league title in 1971. However it was again in the Copa Libertadores that Spencer enjoyed form taking the previously unheralded Ídolo to two semi-finals.

His performances are perhaps not matched at international level where he flitted between Ecuador and Uruguay representing both during the same period, however his ability is unquestionable. In all Alberto Spencer scored 451 goals in 652 games. In the Intercontinental Cup his record stands just one behind Pelé and in the Copa Libertadores he is by some distance the all-time top scorer with 54 goals in 87 games.

Equally good with both feet, Spencer combined searing pace with prolific finishing and a heading ability bar none that left Pelé saying:

Someone that headed better than me was Spencer. I was good (in heading), but he was spectacular heading the ball.

Cabeza Mágica was a true legend of the game.