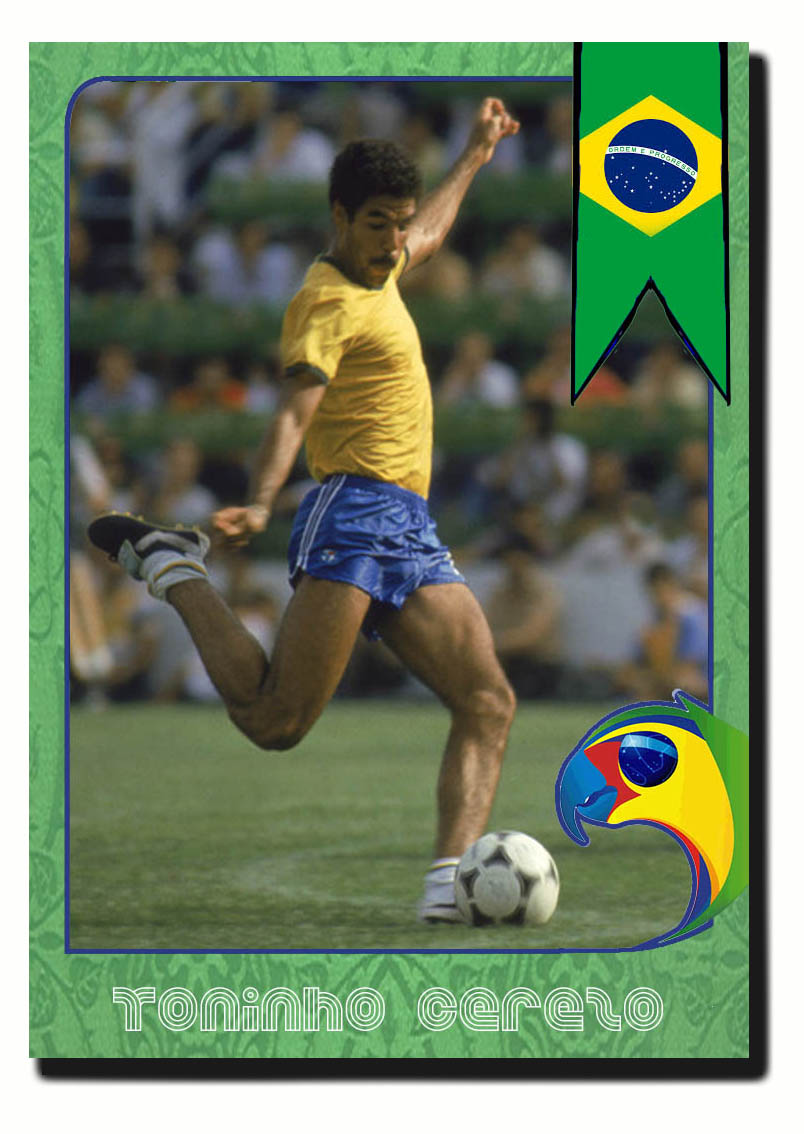 On the 5th of July 1982 Brazil lost 2-3 to Italy in A tragédia do Sarriá when the jogo bonito died. A line-up that included Sócrates, Zico and Falcão could not break down an organized Azzurri. In the match, Paolo Rossi’s thunderous second goal came from an intercepted pass from Toninho Cerezo, a pass for which he was harshly criticized.

Born Antônio Carlos Cerezo in 1955 in Belo Horizonte, at 17 years old Toninho began an eleven year spell at Atlético Mineiro that brought seven Campeonato Mineiro titles as well as two Golden and one Silver Ball trophies and his first contact with Telê Santana who was to be influential throughout his career.

During this time the rangy Toninho (he was once described “as long as a day without coffee”), had developed into a fine defensive midfielder, not only strong in the tackle, but energetic, tactically aware and with a fine range of passing. His performance for Mineiro had brought him to A Seleção in 1977. Cerezo would go on to earn 57 caps for Brazil over the next eight years appearing at both the 1978 and 1982 World Cups and be a regular under Santana until injury forced his cut from the 1986 squad.

His performances led AS Roma to pay a reported $10million for him in 1983 – a substantial amount then for a defensive midfielder. Toninho would stay for three years helping i Giallorossi to two Coppa Italia titles the second in 1986 against a Sampdoria team he was joining a few week later.

The move to i Blucerchiati brought more success – the Coppa Italia in 1988 and 89; a UEFA Cup Winners Cup and Sampdoria’s sole Scudetto in the 1990-1 season. Age and injuries may have been catching up but when Sampdoria reached the European Cup Final in 1992 their opponents – Barcelona – thought enough of the old man (he was 37 by then) to put one of their brightest stars – a certain Pep Guardiola – to mark him.

The summer after that final Santana came calling again and Cerezo joined São Paulo. More triumph followed over the next two years including a Campeonato Paulista and a Copa Libertadores. São Paulo had already won the 1992 Intercontinental Cup when in 1993 they faced AC Milan with a chance to become only the fourth team to win the title back to back.

This was the Milan of Baresi and Maldini who would win the Scudetto the coming season conceding just 15 goals. The 38 year old Toninho excelled. A first time cross field pass to a young Cafu to set up the first, followed by a timed run to score the second at the back post himself and capped off with a defense splitting pass for the third. São Paulo won 3-2.

Cerezo played a few games over the next few years but injuries and age though continued to catch up and 1997 saw the curtain close on the career of a remarkable player, perhaps fittingly where it had all started – Atlético Mineiro.

Tune in throughout the World Cup as the series unfolds