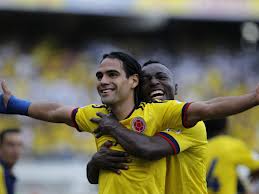 Colombia have qualified for their first World Cup in 16 years after sensationally coming back from 3-0 down to draw 3-3 with Chile.

The Cafeteros started off weakly and succumbed to a three goal blast in the space of 13 minutes which looked like it would leave José Pekerman’s side’s route to Brazil in serious doubt with just one game to play.

Following a foul by goalkeeper David Ospina in the 17th minute, Chilean midfielder and Juventus star Arturo Vidal opened the scoring from the penalty spot.

Just four minutes later, live-wire striker Alexis Sanchez took advantage of some lethargic defending and tapped in from a couple of yards out after a poorly defended corner.

A rout seemed on the cards as two became three on the half hour mark when Barcelona star Sanchez curled a shot and into the far corner of the net from the edge of the penalty area.

Colombia came out strongly in the second half though, pressuring and harrying the Chilean midfield, and putting together some passes for the first time in the match. Midway through the half, the Colombians finally reaped some reward for their efforts as Teofilo Gutierrez steered the ball home through a crowd of bodies.

Six minutes later came the turning point of the match. A red card for Chile and a penalty for Falcao, which ‘El Tigre’ duly dispatched, sending the keeper the wrong way.

The Cafeteros poured forward, confident that they could snatch the most unlikely of draws, and in the 80th minute the pressure told after Jaime Rodriguez forced another penalty, scythed down as he burst into the box with Falcao once again netting from the spot.

As the news came through that Ecuador had beaten Uruguay, meaning that Colombia could not lose their top-four spot (even if they contrived to lose the game), the home side stepped off the gas and spent the remaining minutes passing the ball around the defense, with each pass accompanied by a cheer from the home crowd.

At the final whistle the players jumped and danced and shouted with joy at what will be a first World Cup for every member of the Colombian squad. Elsewhere, Ecuador and Chile all but sealed their tickets to Brazil this weekend, leaving Uruguay most likely to play a fourth successive inter-continental playoff to join them in Brazil next year.

In Quito, Jefferson Montero scored on the half hour to give Ecuador a 1-0 home win over Uruguay and climb to third in the South American group behind leaders Argentina, who qualified last month, and Colombia. The Ecuador team did a lap in honour of their late team mate Cristian Benitez, who died suddenly of heart failure in July.

Venezuela’s slim hopes of going to the finals for the first time ended in a 1-1 draw at home to Paraguay, while a rampant Argentina, without Lionel Messi and Gonzalo Higuain, beat Peru 3-1 in Buenos Aires with Ezequiel Lavezzi scoring twice after Claudio Pizarro’s fine 21st-minute opener for Peru.

Uruguay’s fifth place finish will see La Celeste face Jordan in next month’s two legged play-off for what will be the final spot at the 2014 World Cup.