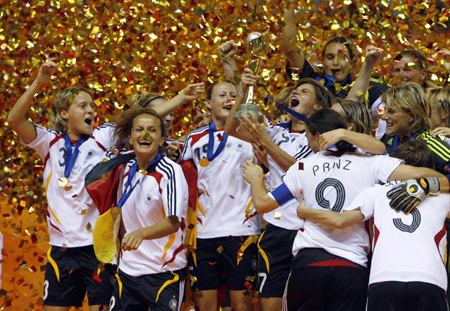 For many football fans, the summer months (at least in Europe) are tough as there is little club football to watch. For myself, I miss going to the pub to watch Manchester United play and being honest, the transfer rumours and sagas that take place are more annoying than they are satisfying.

However, instead of looking to other leagues across the world which pose dangers to my already fragile sleeping habits i.e. the MLS and the A-League (sorry guys!), I look to women’s international football. I am a football-loving female and having been involved in ladies football in different ways, it’s always in my interest to watch as much ladies football during the summer as I can.

Between April and June 2010, I watched the Ireland U-17 team progress to the final of the Euro Elite U-17 Cup after two wins and a draw in the second qualifying round and beating Germany in the semi – final. Unfortunately, they lost to Spain on penalties but the girls showed great determination and some of the football on show was brilliant with San Pedro being the standout player for Spain.

The competition allowed three teams to progress to the U-17 World Cup Finals in Trinidad and Tobago in September 2010 with Ireland being one of the teams. Ireland lost 2-1 to Brazil in the first fixture but not allowing themselves to be disheartened, they followed up with a 1-0 victory over Canada and a 3 -0 victory over Ghana to top their group. Ireland lost out to the eventual winners, Japan, in the quarterfinal by two goals to one.

I managed to rope a few other people into watching these games with me and we all enjoyed the football on show. Yes there was some drubbings in the competition such as Germany beating South Africa 10 – 1 (Germany were winning 9-1 at half time!) but these type of games seem to be on the way out as more nations become competitive at underage levels and almost reaching the standards set out by Germany, U.S.A, Brazil and Sweden. 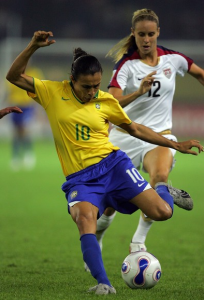 In comparison to the Men’s World Cup, you won’t catch a Women’s World Cup Final in black and white on ESPN Classic. It was first hosted by China in 1991 with the U.S.A being crowned World Champions. Since then, Norway has won it once, the U.S.A has won it a second time and Germany has won the previous two finals. It will be a huge achievement if Germany is to clinch the three-in-a-row on home soil.

As you can see, the competition has been dominated by a few countries with China, Brazil, Sweden and Norway being there or thereabouts. One of the reasons being is that when you look at the squads, many of the players that are not plying their trade at club level in their home country are playing in the leagues of the countries mentioned above. For this reason, the 2015 World Cup in Canada will see 24 teams competing rather than 16.

The FIFA World rankings back this up with the U.S.A currently sitting at the top of the rankings, followed by Germany, Brazil and Japan overtaking Sweden for fourth place.

Like the men’s competition, the countries qualify for the finals through regional competitions. 16 teams are seeded into four groups of four and the games take place over a three week period. The group stages take a round robin format with the group winners and runners-up progressing to the knockout stages.

The losers of the semi finals play off for third place with the winners playing for the ultimate prize in women’s football.

I must start this section by pointing out that kick off times in this article are local to the World Cup so it’s German time I suppose. The competition kicks off with Nigeria playing France at 3 o’clock on Sunday the 26th, followed by Germany versus Canada at 6pm.

It goes without saying that all eyes will be on Germany for this tournament and seeing whether World Cup veteran, Brigit Prinz, will add to her World Cup all-time leading goal scoring tally. She will be captaining the team from the front line.

I think it’s about time Brazil really push on and take home the cup after being runners up in the previous final. With the Pélé of Women’s Football beginning to enter her most fruitful years in football, you can’t help but think that Marta will be vital to the Brazilian charge. She’ll be looking to put her penalty miss in the second half of the 2007 final behind her.

Women’s football in Asia has quietly but impressively been improving. Korea has been successful at underage and will be looking to carry these young players through to the World Cup squad. With an average squad age of 20, it’s clear that they are starting now with a look to the future while retaining the experience of players like Jo Yun-Mi in the centre to control the play.

Moving closer to home, England will be another team to keep a close eye on. They have been largely ineffective on the international stage at the World Cup (kind of like the Men’s team then…) but they are looking to change that this year. They have been consistent in European competitions of late and were solid in the qualifiers making it through unbeaten. The bulk of their squad is made up of players playing for Arsenal and Everton, not surprisingly. The squad has vast experience and really should be at least in the running for the third place playoffs in my opinion. Rachel Yankey and Kelly Smith will be vital to their chances.

I haven’t touched on Canada, the Scandinavian teams or the African teams yet but I certainly intend to in the future.

Also, for those who were wondering like I was, Equatorial Guinea is a country in west central Africa and has the third smallest population in Africa. Thank you Wikipedia!

I'm a 21 year old Music Technology graduate with an unhealthy love for football and all things Manchester United. My focus with Back Page Football is on Women's football across the world, mainly on the international arena.