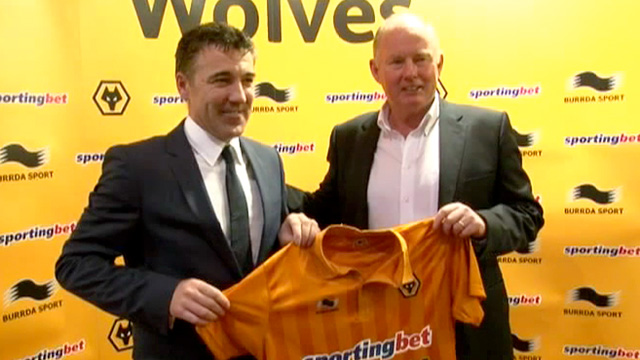 It has been a miserable 18 months for Wolverhampton Wanderers.

Having been top of the Premier League table (albeit briefly) back in August 2011, supporters have since endured a downward spiral of dismal defeats, managerial sackings, atrocious boardroom decisions, falling attendances, relegation, more managerial departures and potentially the dire statistic of becoming the only English club to achieve successive relegations from top-to-third tier for a second time.

Much of the fans ire has been directed towards owner Steve Morgan and chief executive Jez Moxey as fans continue to seek change for the better.

Having sacked Mick McCarthy as manager in February 2012, Morgan has gone on to hire three managers – Terry Connor (interim), Stale Solbakken and Dean Saunders. None have been anything like successes. Each has greatly underwhelmed. And thats an understatement.

Connor failed to secure a Premier League win in 12 attempts as Wolves sank like an anchor to relegation last year, months after being held up as beacon of light to poorly run clubs given their impressive financial results.

Solbakken was appointed and greeted as some kind of visionary; The man to lead Wolves back to the promised land, whilst simultaneously overhauling the clubs footballing structure as well as a rudimentary playing style which had in the end been found wanting at the top level. Without question it would take time. After six months of difficulty, he was sacked.

Saunders arrived and immediately looked out of his depth, as a run of five points in his first nine games will atest. The footballing overhaul was put on indeterminate hold, and his playing style has struck fans as nothing more than McCarthy-lite. Back to the future.

Additionally, the playing staff have, to put it succinctly, failed. Players who had been performing to their optimum under McCarthy in the two years that Wolves succeeded to stave off the threat of relegation from the top-flight – Karl Henry, Stephen Ward, Kevin Foley to name three – have regressed substantially.

Costly signings such as Jamie O’Hara and Roger Johnson, who arrived supposedly to enhance a Premier League outfit, have far from offered value for money, especially given the divisive nature the two men have had on the rest of the squad and the problems which they’ve caused in and around the training ground.

And all that’s without mentioning Molineux’s forgotten men, such as Georg Margreitter, who cost €2m from Austra Vienna in August, but has found just 10 minutes of playing time in the Championship, despite the continuous problems of Wolves shaky defence.

On Saturday, Wolves play host to Burnley, realistically needing all three points to even stand a chance of retaining Championship status. That the latest incumbent in the managerial hotseat, has led the side to three home wins in the last four offers some degree of hope. That Saunders has overseen a meagre five wins from 18 games since his replacing of the Norwegian Solbakken on January 7, and the recent home defeat to fellow strugglers Huddersfield Town, offers far less.

Wolves fans will be hoping that their side can garner enough points from their remaining two fixtures to drag them from the Championship bottom three to safety.

Then, and only then, can the demand for change and to stop the continued reversion of this historic old club, begin. But that scenario is far from secure, and could be even less so come Saturday evening.