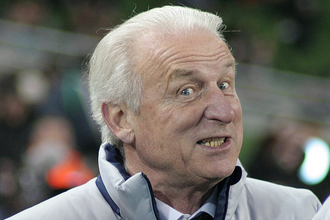 A year which saw Republic of Ireland manager Giovanni Trapattoni somehow cling on to his job has ended with the Italian being inducted into the Federazione Italiana Giuoco Calcio (FIGC) Hall of Fame.

Trapattoni won 29 trophies as a player and coach that included 12 top flight league titles in four different countries. He is the only man to win the UEFA Cup, Cup Winner’s Cup and European Champion Clubs Club/European Cup. He also holds the record for most UEFA Cup wins (three).

Speaking at the induction ceremony, the 73 year-old admitted that the European Championships in Poland this summer had been ‘terrible’ from an Irish perspective.

The Republic of Ireland lost all of their three games at the Euro, enduring the joint worst record ever of a qualifying nation. Trapattoni continued his now traditional theme of citing the positives as he said that the failed Euro campaign “did not perturb” him.

Irish matches following the European Championships followed a similar pattern to the clueless nature of the European campaign. The Boys in Green scraped a highly fortunate last gasp 2-1 win in Kazakhstan before being hammered 6-1 by Germany in Dublin at the start of the 2014 World Cup qualifying campaign.

He also sought to look for excuses for the debacle that was the game against Germany by stating:

Yes, there was the bad result with Germany, but as the manager, I have to remember there were six key players missing. I know it was not the Ireland that is there within this group of players.

The veteran sought to explain away the fluked win in Kazakhstan by stating that Austria had struggled there and couldn’t win (Kazakhstan earned a 0-0 draw against the Austrians).

The 1985 European Cup winning manager then sought out the ‘highlight’ of the Irish World Cup qualifying campaign so far. That was beating the Faroe Islands some four days after the German disaster. Trapattoni stated:

Even the match against the Faroes immediately after [the German match] showed that the identity, spirit and enthusiasm are still there. We need to keep growing that trend.

Trapattoni also spoke of his desire to recruit Norwich City striker Anthony Pilkington to the Irish cause. The 24 year-old’s stock rose on Saturday as he scored one and created one of the Canaries’ goals as they beat Wigan 2-1 to maintain an amazing unbeaten run which has now extended to 10 games.

Trapattoni spoke of the English born former Irish Under-21 international in glowing terms, referring to him as being “technically excellent and physical.”

The news of the exiled Darron Gibson is less positive however. Trapattoni has stated that he hopes to speak to the Everton man in the new year and has not ruled out the possibility of the Derry native returning to the international fold though.

The futures of experienced centre halves Richard Dunne and Seán St. Ledger is also unclear. Their return date from injury is not yet known though Trapattoni has stated his confidence in the replacements for a pair who have clocked up 110 caps between them.

Trapattoni is hopeful that Marc Wilson will return in time for the crunch qualifiers against Austria and Sweden in March, with the manager stating that

Having seen the progress (Ciaran) Clark has made, getting a lot of game time, I am not concerned about it [the possible absence of Dunne/St. Ledger]. He is stepping up.

One thought on “With ironic timing, Trapattoni inducted into FIGC Hall of Fame”