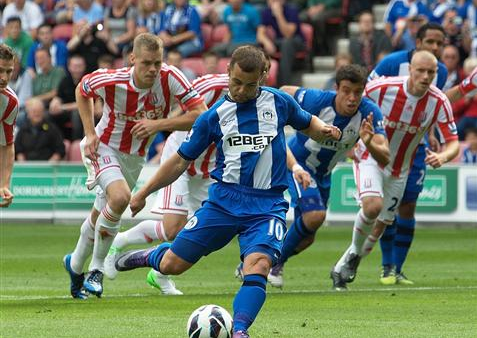 There are some players who settle into a new league or a new team in an instant; players who score hat-tricks on their debuts, players you can only wish had been bought sooner.

There are others who never settle, and they leave you not with fond memories, only question marks.

And then there are most players; because most players take their time – to get comfortable, to gel, to learn the language if not of the country than of the team.

But there’s also a fourth category: the player who doesn’t look anything special at all, and then one day, years later and probably for a different club, he does.

I was thinking all this as I sat down to write about Shaun Maloney.  I wondered which of the four categories he’d be.  And then I realised it was all of them.

Maloney didn’t really register with me until the end of last season, when Wigan Athletic went from relegation certainties to silky-smooth slayers of Liverpool, Arsenal, Manchester United and Newcastle.

In those few weeks, when Roberto Martinez’s team won 7 of their last 9 games, Maloney was outstanding.  And all I could think was – this isn’t the same guy who played for Aston Villa.  That Maloney was okay but this Maloney…this one’s running the show.

But it turns out it is the same player.  And he’s started this season as he finished the last.

Another man-of-the-match performance (and a goal) against Stoke helped his team to a 2-2 draw, and he continues to thrive as part of a front three, dictating play, creating chances and generally looking like the player he promised to be when he first left Celtic in 2007.

I remember watching Villa’s version of Maloney.  And I remember not being very impressed.

He didn’t seem to do anything.

And then he found some form, scoring twice in a 4-4 draw at Stamford Bridge.

But shortly after, he returned to Celtic and I forgot him; that is until Wigan’s phenomenal run last season with him at the heart of it.

So I did some research…because he intrigued me, this player who hadn’t impressed me first time round only to return and have me applauding.

And I feel a bit foolish not to have known him better – because in Scotland he was fantastic, the first player to win both the SPFA Players’ Player of the Year and Young Player of the Year in the same season.  A player who scored 8 goals in just 11 League Cup starts and 39 goals in 89 League starts.  Not bad for a winger-cum-midfielder.

Maloney joined Celtic as a trainee in 1999 and, over two spells, played there for 11 years.  It is very much his home and he never truly settled at Aston Villa.

So it seems this is why I’ve seen two versions of the same player.  And why Roberto Martinez felt Maloney needed time to settle at Wigan before giving him regular starts.

He signed for the Latics in August 2011, but didn’t become a regular until March 2012.  And when he did, well, I don’t think it’s overstating it to say he was integral in keeping them up.

A lot of players get noticed because of the shirt they wear.  And for the same reason many do not.

But Shaun Maloney deserves to be recognised.

I have a feeling he’s found a second home.  And in Martinez a manager who knows how to get the best out of him.

Most footballers can play the game but only a few can dictate it.  From what I’ve seen of the revived Maloney, he may just be one of them.

2 thoughts on “Will the real Shaun Maloney please stand up”