New York Red Bulls have pulled off a major coup in securing two ex-Barcelona stars, and Jonathan O’Shea looks at the impact they will have on the MLS. 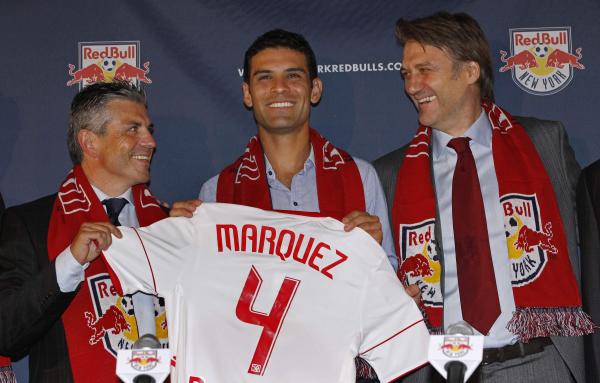 American sports fans are renowned for their love of stats – not to mention an acronym or three. The steadily-developing MLS, still in its infancy, received a sudden shot in the arm recently by the relaxing of the ‘DP’ rule. The designated player statute was drafted into MLS predominantly to cater for marketable stars such as David Beckham in a competition previously governed in a relentlessly egalitarian manner. Contracts are centrally owned by the league and wage caps must be strictly adhered to; as the administration seeks to foster a stable, competitive league. Few would doubt that MLS has, to date, achieved this goal.

While Becks’ stay in LA has so far received mixed reviews, one of the few original DPs, Colombian centre forward Juan Pablo Angel, has brought rather more to the table. In fact, the one-time Aston Villa fan-favourite has almost single-handedly proven the worth of the new system by virtue of 56 goals in 89 MLS games since his move to New York Red Bulls four seasons ago.  Those are the kind of sparkling stats to get armchair fans shuttling into the fast-growing number of soccer-specific stadia springing up in cities across the US.

So, on the back of a relatively successful World Cup adventure for the national team (which attracted healthy viewing figures and grabbed front-page headlines throughout), the MLS naturally decided that the time was ripe for further growth. To get more clubs to sign DPs, therefore increasing their ‘soccer superstar’ quotient, the rules were relaxed; allocating a maximum of three Designated Players, providing the club using the third slot paid – here comes that wonderful egalitarianism again – a $250,000 ‘luxury tax’ to be evenly distributed among the other 15 MLS franchises.

The Red Bulls, who opened an impressive $220m stadium recently, have been the first to capitalise. Now joining Angel in New York (or New Jersey, to be precise) are two Barcelona stalwarts who last season fell from grace at Camp Nou as Pep Guardiola chose to integrate home-grown starlets such as Pedro and Sergi Busquets in their place. Thierry Henry’s long-touted move Stateside was something of a PR coup for the league, but the rather more unanticipated signing of Mexico skipper Rafa Marquez has really piqued the interest of the States’ significant Hispanic community. 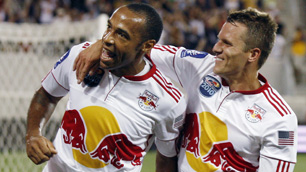 Making their first appearance in tandem for their new club on Sunday evening, Marquez and Henry were up against Eastern Division rivals Chicago Fire – a team which has also been quick to utilise the new DP ruling. Henry’s former Arsenal team-mate Freddie Ljungberg has been traded in from Seattle Sounders to add some much-needed fire to the Chicago attack and globe-trotting Mexican forward Nery Castillo joined, on loan, late last month to take the no.10 shirt of another Latin star; bunny-hopping veteran Cuauhtemoc  Blanco, who returns south of the border to see out the final days of his career.

Some hype-hungry pundits heralded this game as the dawning of a new era in MLS, but in reality it was more of a hard-fought mid-season scrap peppered with just a little star dust from some half-fit erstwhile stars of the European game. In fact the game – in tempo and in quality – very much resembled an English second-tier game, which was fitting, as both teams featured strike-duos of former Premier League notoriety: Angel and Henry for the Red Bulls; Fulham cult-hero Brian McBride supported by Ljungberg in a free role for the home side.

A patently unfit Henry offered a limited threat during the first half – with one cutting, diagonal run through the Fire defence ending in a shot straight at impressive ‘keeper Sean Johnson. Lingering rust in the legs of a man who spent a significant chunk of the summer sulking in South Africa manifested itself in a minor groin strain, leading to his anti-climactic withdrawal just before the break. It was, instead, Titi’s former Gunners team-mate Ljungberg who came closest to breaking the deadlock. The ageless McBride fed the Swedish star with a smart angled pass, but the ball bobbled just as he looked set to bundle it in at the far post, instead going harmlessly wide off his thigh.

Henry’s nominated replacement, Jamaican winger Dane Richards (scorer of this dazzler against Manchester City last month) started the second half with a bang; a Rafa Marquez ball sent him driving to the goal-line to cross for the frequently clumsy Senegalese striker Macoumba Kandji, who couldn’t convert. Chicago, under the cosh for large swathes of the game, curiously decided to withdraw target-man McBride to offer Castillo his debut. A typically understated American welcome – fireworks and furious name-chanting – welcomed the nomadic youngster to his latest home; the one-time wonderkid having flopped in Donetsk, Dnipropetrovsk and Manchester since leaving Olympiacos three years ago.

With two diminutive forwards now at the point of attack, Chicago’s threat was diminished even further – while wilful but wayward former Fulham striker Collins John remained rooted to the bench. With the substitution of Marquez on the hour went the game’s last bastion of genuine quality. If the 31-year-old can maintain peak fitness amid the hectic MLS schedule and excessive air miles, his role as a Xabi Alonso-style playmaking ‘quarterback’ will be just as significant for the New Yorkers as Henry’s.  And his ambitions are plain: “My expectations are the same in MLS (as at Barça), I want to win everything possible,” he told the press at his signing. “I have a winning mentality and I want to help this team win titles.”

As proceedings at an oversubscribed Toyota Park stadium slipped into a messy morass of misplaced passes, Angel – the one truly match-sharp DP – came close with a trio of well-worked efforts on goal, before Man of the Match Johnson preserved a point for Chicago with a top-class save from marauding defender Tim Ream.

So a goalless draw, or ‘tie’ if you prefer, failed to justify the hype. Upon his arrival, Rafa Marquez likened the standard of MLS to the Dutch Eredivisie or France’s Ligue 1. In truth, the quality of the league still lags behind that of its longer-established European cousins – that’s only natural. But if the remaining MLS franchises can pull off a few more DP signings in the mould of Marquez and co, it would serve to hasten the arrival of Stateside soccer as a global player.