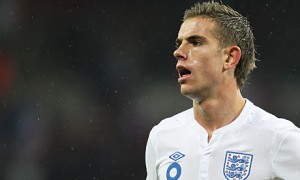 The English national side are moving swiftly towards a watershed moment. With the core of their side (Gerrard, Lampard, Cole and Carrick) all nearing international retirement, the next group of players to break into the side will likely remain there for the next decade.

In light of this, the focus on the Premier League’s young, English midfielders is building: players like Tom Cleverly, Ross Barkley and, most of all, Jack Wilshere have been touted as the next to take the mantle from the current generation.

However, there is a player in particular who seems to have all the credentials to fill this gap, yet none of the plaudits – Jordan Henderson. The Liverpool man has been in outstanding form this season as part of a midfield trio in which he is the ‘water-carrier,’ and is displaying potential deserving of a place alongside Gerrard in the national set up. Still judged by most fans as having crumpled under the pressure of the alleged £20m transfer which brought him to Liverpool, Henderson’s blistering form this season has gone largely unnoticed next to that of Wilshere and Barkley.

Looking at the statistics, however, one would find that Henderson has eclipsed his counterparts in almost every field. When it comes to distribution, Henderson is second to none. He has a pass completion rate of 87%, and creates roughly two goal scoring chances per game. In comparison, Wilshere and Barkley create 1.3 and 0.9 per game respectively. Defensively, Henderson’s output grossly outweighs that of his rivals, making double the amount of blocks and interceptions of Wilshere, with Barkley making only one quarter of the blocks that Henderson does. The only areas in which Henderson is surpassed by the other two are successful dribbles and goals scored, which are arguably the least important for the ‘water-carrier’.

Of course, pure statistics are to be taken with a pinch of salt (after all, Chico Flores has the second highest pass accuracy in the league). Looking at Liverpool this season, however, it is clear that Henderson is not simply a statistical anomaly like Joe “95% pass accuracy” Allen was in 2011/12. His tenacity and desire to win are not dissimilar to those held by his captain, Steven Gerrard over the last 15 years. It is clear that Rodgers has developed Henderson into the engine which his flair players run off of, an instrument which could be extremely advantageous to the England side of the near future. With players like Walcott, Sturridge, Oxlade-Chamberlain and Sterling all focused primarily on attack, a player of Henderson’s ilk is pivotal for the side to function, especially with players such as Wilshere and Barkley also looking to take on the defense like the aforementioned attackers.

That is not to say that those players will not, too, be future England stars. Wilshere’s tenacity and sheer desire to win was the prevailing image for Arsenal in their 5-1 drubbing at Anfield at the beginning of the month. It is clear that Wilshere is essentially the adhesive holding the Arsenal midfield together in situations such as that, when ‘fair weather players’ such as Özil crumble and simply go through the motions until the final whistle. Alongside a player such as Henderson, Wilshere could flourish. Placing him alongside a fellow playmaker, however, could make the English midfield as unbalanced as it was when Gerrard and Lampard played together.

Despite my detestation of the word, I will allow myself to call the potential Henderson-Wilshere partnership a ‘double pivot’, in which Henderson does the leg work, closing down the opposition’s midfielders, while Wilshere distributes the ball to the wings or takes on the opposition’s defense. The importance of Henderson’s potential role in such a system would be impossible to exaggerate, and something which I feel the current England side are missing in their game. They are more a group of individuals than a cohesive unit, not due to egotism, but rather due to an inappropriate foil in midfield in Michael Carrick, and earlier Frank Lampard.

For me, Henderson’s role in the next English set up will dispel any doubt in the minds of fans still unconvinced by him. With the likes of Barkley, Sturridge and Walcott coming to the fore in the near future, I hope that there won’t be a desire among English fans to see a group of individual talents meshed together ineffectively, but rather an understanding that, while not likely to find himself bearing down on goal, Henderson will work tirelessly and effectively to ensure that others do.

16 Year Old Newbie, Supports LFC. Often tweets ill-thought out rants and other nonsense. Likes footballing history, particularly in Eastern Europe. Can be seen arguing with fans of League of Ireland on street corners and Twitter.