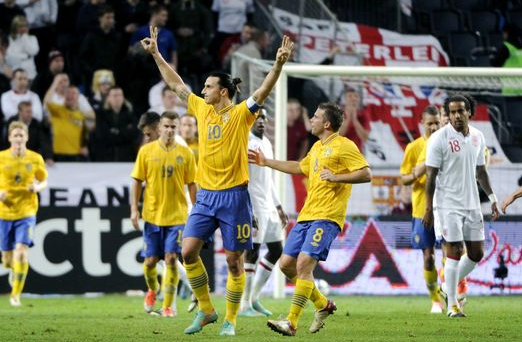 Football and footballers have become so boring and politically correct these last few years haven’t they. Think of the recent Roy Hodgson joke farce. Think of boring players like Alan Shearer, Michael Owen, Paul Scholes etc. How uptight and sensitive players are now, whining about a space joke. Other players who sit on the fence when asked opinions on other players or results, It’s all so boring. But there are a few players who love to be hated.  There are some players, both past and present, with unlimited talent and are just off the wall nut cases. Players, who scored goals, won titles and got monkeys drunk.

This last week we have seen some outrageous goals by some brilliant players, none more so than the mercurial Swede, Zlatan Ibramhimovic. The Paris St. Germain star recently bagged four goals against Anderlecht and three of those goals were scored in eighteen minutes. The third goal was the pick of the bunch. The ball dropping to the Swede about thirty-five yards out and with little back lift, the ball rocketed into the top corner at 72.6 mph. A few days before, Ibrahimovic scored a ridiculous back heel with the ball at head height. He adjusted his body, held off his marker with strength and audaciously heeled the ball into the net at pace.

The thing is with Zlatan, we all know he can do this. If you have a few minutes, go to YouTube and type him in and some of the goals you will see are just outrageous. The overhead kick from near the half way line against England is one that sticks out. However, a lot of people don’t like him because of his arrogance, his demeanor on the field and his just pure “I don’t give a shit” attitude. Yes he is cocky. He is arrogant. Look, he has boots to match his car, that’s how cocky he is. He is like a Swedish Eric Cantona. So sure of his ability that he can turn it on and off whenever he wants. So sure of his ability, he can wear what he wants and say what he wants. Here are some of his quotes to give you an indication of the person he is:

We are looking for an apartment (in Paris). If we don’t find anything, then I’ll probably just buy the hotel.

When asked what he got his wife for her birthday, he replied:

Nothing, she already has Zlatan.

When questioned about the subject of his sexuality by a female reporter, Ibrahimovic was emphatic in his response:

Come to my house and you’ll see if I’m gay. And bring your sister.

Yes the man is a cocky git but he can back it up. Look at the trophies he has won. He has racked up Dutch titles, La Liga titles, Italian titles with three different teams and a Lique 1 title.  Impressive you must to admit. He is a brilliant player and a polarizing character but so entertaining. I love him as a player. I love his audacity, his confidence in his ability and just everything about him. He makes football interesting again.  I wish he would come to play in England and light it up. Football needs more characters like this otherwise it will become as boring as cricket. There are not many players like him anymore.  Here are a few from days gone by that were brilliant players and sensational mad men.

The Brazilian striker was nicknamed The Animal for his temperament and off field antics. You may remember his goals against Man United in the World Club Championship where he spun the ball around Silvestre and chipped Mark Bosnich. This goal was pretty much exactly the same as Bergkamp’s goal against Newcastle two years later.In 1999 he faced prosecution by animal welfare groups after hiring an entire circus to perform in his back garden to celebrate his son’s first birthday. At the party he was accused by some individuals of the press of having a chimpanzee called Pedrinho drunk on beer and whiskey.  In 1995 during the South American quarter-final against Argentinean team Velez Sarsfield, he responded to a tough challenge from an opposition player by slapping him square on the face, earning a punch back for his trouble. The result would be an all-out brawl between both teams and coaching staffs as belligerents on all sides aimed kung-fu kicks and punches at each other. Another time while intoxicated, Edmundo crashed his speeding truck into another car, killing the three passengers whilst he himself would only receive 10 stitches. After he was found guilty of drink-driving and manslaughter, he wasn’t jailed, but given a free pass due to his profession and at the time of sentencing and only spent a few nights imprisoned

The Bulgarian, also known as the Dagger, was a fabulous talent and absolute nut case. In one season he received seven red cards. In his first season at Barca he was suspended for two months after stomping on a ref’s foot. The ball went out of play and Stoichkov felt it was a Barca ball. The Ref disagreed, so Stoichkov stood on his foot.  In a recent interview Swansea manager, Michael Laudrup, former team mate of the Bulgarian, told this story:

At Barca we came second in my first year and Johan Cruyff announced that he felt the team needed, I think he said, an “asshole” in the side. So he went out and got Hristo Stoichkov. Now, he was the king of Bulgaria and over there if everyone had a short, army haircut he grew his hair long, or if everyone wore a white shirt he wore a black shirt.

He is regarded as one of the best footballers of his generation and the greatest Bulgarian footballer of all time.

The former Newcastle man was two sandwiches short of a picnic, to put it lightly. During his sixteen year career, he played for Italian giants Parma wining the UEFA Cup, European Cup Winners Cup and European Super cup. He will be remembered fondly by Newcastle fans for his hat-trick against Barcelona in the Champions league. Now for his off field antics. In 1993 he did a naked magazine shoot, while five years ago he was arrested for allegedly firing a machine gun at security officers. Recently he was offered a short-term deal with an adult film company. The company is pleading with the former Newcastle striker to join them for one week only to get his kit off. Another crazy story is when he turned up to training while playing in Chile with a gun and threatened to shoot the players if they didn’t run. Proper Mental and a proper player.

All of the players mentioned were incredible talents, magic footballers with talent beyond their own control. They could do things with a football that many cannot and they knew it. They knew how good they were. They knew that in one second they could win a game on their own. They knew they could do what they wanted off the pitch because they were too good to leave out. There are many other nutcases I didn’t include, the obvious ones being Maradonna and Balotelli. Then others like, Ortega, Romario, Recoba, Joey Barton, Cantona, Di Canio and Gazza. I’m sure I have missed a couple and please feel free to remind me.

As they say, there is a fine line between genius and madness. The same applies to footballers. In order to reach the peak of their ability, they must go a bit mental. But I love them. OK, I don’t condone knocking people down and drink driving, but you get what I mean. They were players who were not just incredible footballers but also proper football characters, villains in a pantomime if you will. Football today is a very monotone, systematic and hyper-sensitive.  When I hear Zlatan’s name or see him on the score sheet, I am excited to see what the goal was like. I’m excited to see how he played or what crazy trick he done or who he shouted at. With him, you are guaranteed brilliance and madness. Before we know it, he will be gone, and we will have failed to appreciate the player and person he is. We will miss his madness, mad quotes and phenomenal talent. Appreciate him while he is here. Every good needs an evil, please bring back the nut cases.

3 thoughts on “Why football needs mad-men”