It is already high season for EURO Championships speculation across the continent; with fans nervously checking on star players injuries, the form of their foot soldiers and giving their insights on the good, the bad and the useless.

Ireland fans are no different. With the first teases of sunshine poking through office and pub windows, and YouTube being hit for ‘Boys In Green’ and ‘Joxter goes to Stuttgart’, Irish supporters are more than ready to roar the team on in France. 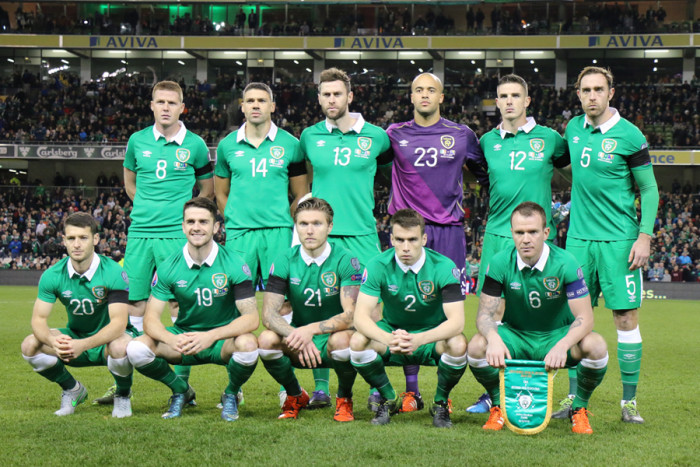 So here at Back Page Football we take a look at the definite, the probable, the maybes and the long shots to form Martin O’Neill’s merry band of 23 who will be based in Versailles come June.

The West Ham keeper is now a certainty to be on the plane, following his starting role against Poland and both play-off games against Bosnia.

He has not been a regular for the high-flying Hammers this season, operating primarily as a Cup keeper, however he has been generally secure when called into action.

His lack of game time is a concern, but he is comfortably in Ireland’s best option in goal.

Much like Randolph, Galway-born Forde has struggled to hold down a regular starting spot, at League One Milwall.

However, given Rob Elliot’s injury, he is now certain to make the travelling party, as either second or third choice keeper.

He has not played for Ireland since their 1-0 defeat to Scotland in Autumn 2014, however he does have tournament experience having been part of the EURO 2012 squad.

The ex-Sligo Rovers man has been an ever present for the Boys in Green since his debut in 2011 and he will be vital to Ireland’s chances of progressing from their group.

Whilst neither he, nor Everton, have enjoyed their most prolific season, Coleman’s energy and quality will be a key feature for Ireland.

He already has his first international goal, albeit against Gibraltar, and stood in excellently for Coleman in the infamous qualifying win over Germany.

He is likely to be second fiddle to Coleman, however he could start, should O’Neill opt to play Coleman further forward.

The man with all the caps, 110 of them currently, will go, in what is likely to be his last international tournament.

The Sunderland veteran has essentially assumed the permanent role of captain, following Robbie Keane’s prolonged absence, and he will provide the defensive experience for Ireland.

He was suspended for the play-off first leg, and O’Neill opted to leave him out of the return leg, however all appears to be forgiven now and he will be given one last hurrah.

Ever present during qualifying and for Derby County this season, Keogh is a certainty to go, although doubts as to his partner remain.

Strong aerially and aggressive in his defensive work, he does need pace around him, but he won’t shy away from the physical threat of Ibrahimovic, Lukaku and co. 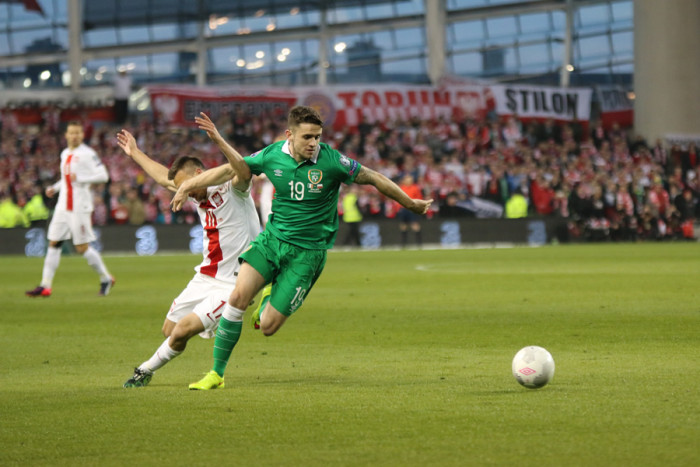 Mr. Versatile is sure to be booking his seat on the plane to France, following a solid season at Norwich and a developing role with Ireland.

He will most likely start at left back, with a restricted licence to roam, his pace and energy will be key as Ireland are likely to come under the cosh against Belgium and Italy.

Set pieces will be his thing, and if his delivery is up to scratch, he could make himself a hero.

The Everton midfield engine is pivotal to Ireland, and his tenacity and ability on the ball could be as important Shane Long’s goalscoring exploits.

Debate rages as to who his best partner is, but his place is guaranteed.

Another veteran of EURO 2012 given a second chance at tournament football, Whelan is the most likely to pair up with McCarthy.

Used as part of a two-man defensive shield for Stoke this season, his selfless will be needed to allow for McCarthy to get forward and make an impact.

Another member of the Derby County contingent, and a real favourite of O’Neill’s during qualification.

Fits all the boxes for a squad player, energetic and loves a tackle, however a lack of quality is worrying.

A promotion push with Derby could be a confidence boost, or an energy sapping marathon for the Dubliner, only time will tell.

The new golden boy of Irish football heads to France with the weight of the country on his shoulders, not that you would know it given his beaming grin.

Eleven goals across all competitions for Southampton this season, along with THAT goal against Germany, won’t strike fear across European defences, however he will be itching to make his mark.

He made a fool out of Martin Skrtel against Slovakia last month, and he has the quality to do that to anyone on his day, let’s hope he has a few of those days in June. 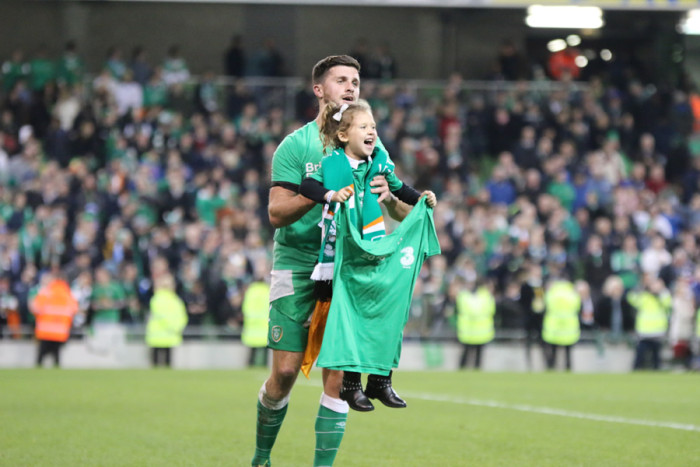 Ireland’s not so secret weapon terrified everyone by getting injured back in March, however the likeable Scouser has assured all he will be fit for France.

He will start on the right of an attacking three, or centrally behind Long, but in either instance he is another crucial component to O’Neill’s Ireland.

Two goals against Bosnia secured qualification, and his aerial ability and raw power will mean no defender in France will look forward to facing him.

Given looked set to be drafted into the Stoke City side following an injury to Jack Butland, however Norwegian Jakob Haugaard has been given the nod.

But following the Norwegian’s poor start as stand-in, Given could yet be given the chance to get some valuable game time before the end of the season.

If he does, O’Neill will pick him, just for the experience he brings.

A consistent squad member under O’Neill, Clark is pretty certain of a place in the final squad.

However he has not had as much game time as he would have liked this season at Villa Park, and when he has played, he has been part of a disastrous Villa team.

The pace he offers should edge him ahead in the competition for centre back places.

The nomadic former Wolves utility man is currently with Burnley, and could get a shout due to Ireland’s shocking lack of left backs.

A regular under Giovanni Trappatoni, Ward would struggle in the tournament and his place would be very much as a back up.

Similarly to Ward, Wilson is likely to get a call up as a back up to Robbie Brady, however he offers far more than the former.

Wilson has fallen off the Irish radar in the last eighteen months, making just one substitute appearance since June 2015, despite starting the campaign as first choice alongside O’Shea.

He is also out of favour at Stoke this season, however his pace and mobility should mark him out as the best of the rest.

Given his chance at Sunderland by O’Neill, McClean has remained a trusted player by his Derry compatriot.

Still yet to bring his best club form to the international stage, many fans remain unconvinced by his temperament and ability to perform at this level.

He has been used primarily as an impact player by West Brom in recent months, and is likely to be utilised the same by Ireland if selected. 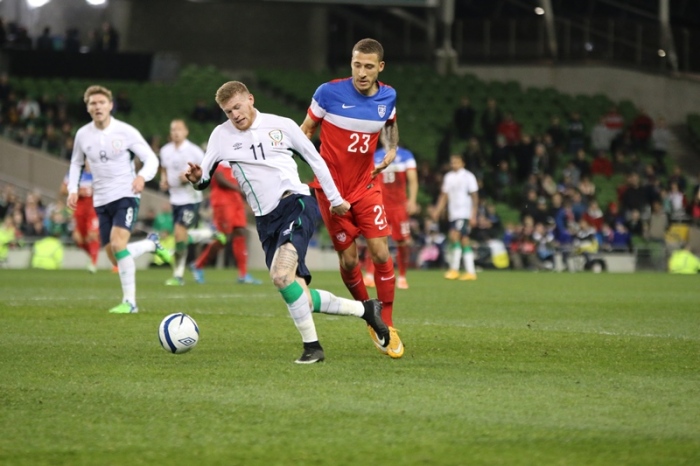 His international cause was championed for so long, and O’Neill has finally decided to utilise his creative talents.

With some noteworthy displays during qualifying, Hoolahan is likely to make the cut, however given his advancing years and O’Neill’s preference for workers he is likely to be a sub.

In a similar vein to Hoolahan, Arter is a player capable of effectually knitting together midfield and attack.

Also a bit of a latecomer to the international scene, his ability to get forward from midfield should secure him a spot.

Admit it, you were worried I’d forgotten him.

Keane’s only issue is his injury problems, and he hasn’t played for LA Galaxy since being removed from the Ireland squad with a knee injury last month.

However, he remains one of Ireland’s most potent forwards, and he would run through several brick walls to be in France, would be a big blow if he missed out.

The Derry-born defender has never really taken off at international level, partly down to injury and a lack of game time.

However it looks unfortunate now that just as he is on a consistent run at Blackburn, he is towards the back of the queue internationally.

Another player that has fallen from regular to also-ran, following Trappatoni’s exit, the former Hull man has featured regularly for Reading this term.

A solitary performance against Slovakia last month though is unlikely to convince O’Neill of his credentials.

The former Celtic man is currently on loan at Sheffield Wednesday, from Everton, and his career appears to be in freefall.

Despite his alarming decline, he is most likely to be the one O’Neill ignores the form book on, and hands a ticket to France. 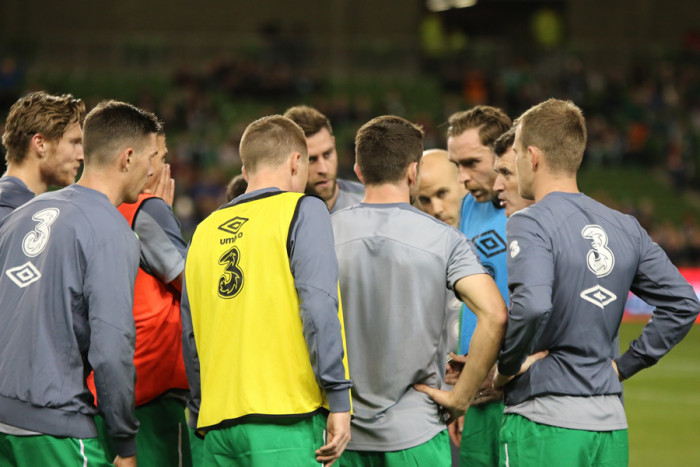 Has had an injury wrecked campaign at Goodison Park, and hasn’t pulled on a green jersey since November 2014.

Would be a brave decision by O’Neill to select him.

Well he’s back from the dead and captianing MLS side Colorado Rapids.

He was dramatically recalled from the international wilderness for last month’s friendlies against Switzerland and Slovakia, and has thrown his hat in the ring for a Euros spot.

Doyle is amongst the goals in the US and his record far outstrips his rivals.

Famously given the nod to lead the Irish attack against Germany during qualifying, but both he and Ipswich team mate David McGoldrick look set to miss out.

Pilkington has featured regularly all season at Cardiff City, however he does not appear to be a player O’Neill has a great amount of faith in.

A real long shot, but the highly rated Manchester City youngster has gained first team experience on loan at Eredivisie side Cambuur.

Plenty of potential, but it would take an uncharacteristically bold move from O’Neill to pick him.