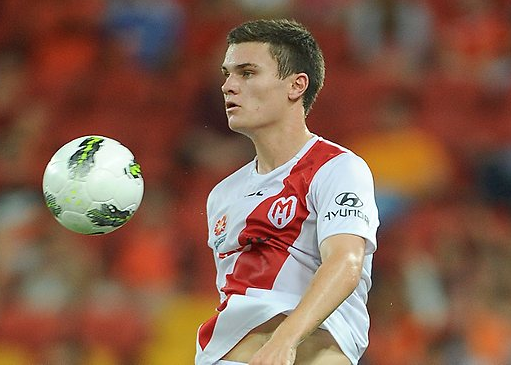 As the Hyundai A-League draws to a close this weekend with the showpiece Grand Final, Australian football has many reasons to be happy with itself at the momet.

Another feel good story has come in the shape of a ten day trial for Melbourne Heart defender Curtis Good with Newcastle United.

The 19 year old, who joined Heart on a multi year deal last February, is as surprised as anyone at the opportunity he has been given.

“I always wondered what it was like compared to Australia, but I didn’t expect it to happen this early, so I’m just going to enjoy the experience,” he said via the club’s official website.

“It was organised through my manager. They saw me play, though I’m not sure if it was in the A-League or with the national team, but it just happened to come about.

“I didn’t even get a chance to tell [my team mates] as this developed really quickly. I only found out at the start of the weekend that I was to head over the next day.”

Good only made his senior debut for Melbourne Heart in the season opener against the Newcastle Jets but became a regular feature in the back four, playing 27 times in total.

Naturally left footed, Good is comfortable at both left back and centre half, and didn’t look out of place playing alongside and instead of seasoned pros Simon Colosimo and Adrian Madaschi at various stages during the campaign.

Like a lot of the talented youngsters in the league at the moment, Good attended the Australian Institute of Sport where he received an excellent education both on and off the field.

Alongside fellow teenagers Brendan Hamill and Eli Babalj, Good was an important component in a squad that reached the A-League finals series for the first time in only its second season of existence, though their run ended with a disappointing 3-0 loss to Perth Glory in the first knockout stage.

Given Good’s age and the fact that he has a full season of professional football under his belt, now is a good time for him to try his luck overseas, especially with the Heart all set for changes at the top following the departure of inaugural coach John Van’t Schip.

Having watched him in the flesh three times this season, it’s a little surprising that he has been coveted by a Premier League club but the potential is certainly there to learn and eventually become a quality defender.

Good also has three Olyroos (Australian under 20) caps to his name so is working his way up through the ranks at both club and international level.

Even if the trial doesn’t work out, the experience gained by just being around a club like Newcastle United will stand him in good stead.

Australian defenders have done well in the UK in recent years with the likes of Craig Moore, Lucas Neill, Tony Popovic and the much maligned Keven Muscat all forging strong careers for themselves, and Good would no doubt be delighted to follow in their footsteps.

It remains to be seen whether Good will do enough during his spell in England to earn a Premier League contract but the fact that he attracted interest from overseas is a huge boost for the A-League as a whole with the standard gradually improving year on year.

One thought on “Who the f**k is Curtis Good?”