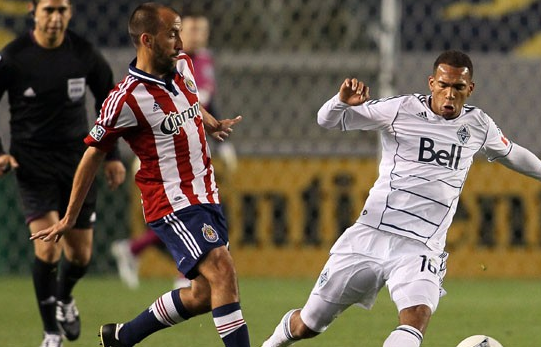 Vancouver have conceded none, lost none, but should fans be concerned?

It’s a testament to the expectation surrounding this team that, after only three matches, many are wondering why the system hasn’t ‘clicked’ yet. Defensively sound, the Whitecaps have continued their preseason form into the MLS 2012 season but the attacking threats have yet to deliver.

The win over MLS newcomers, Montreal Impact, in the opening match of the season was expected. It was an efficient display but a welcome result, and one that represented the first competitive victory under the guidance of new manager Martin Rennie.

A tight 1-0 win over Chivas USA in the season’s second match left much to be desired. The Los Angeles-outfit managed the lion’s share of the possession, but a Whitecaps goal from captain Jay DeMerit proved to be the difference. It was a poor performance.

The expectation was,  that with the nearly 20,000-strong support at home to DC United, the shackles of efficiency would be lost. The Vancouver faithful were treated to a rather dour 0-0 draw epitomized by missed chances, questionable refereeing, and the inexcusable lack of a shot-on-target by the Whitecaps.

As Jay DeMerit said in a post-match interview:

We have to work on being creative and creating more chances. Two games in a row now, we haven’t done as well as we should have.

Are fans expecting too much, too soon? Probably not. All signs from preseason action pointed to a side built on the premise of fluid attacking, tight pressing, and clinical finishing. The one stand-out fact from the preseason preparations was the lack of time Sebastien Le Toux and Eric Hassli shared on the pitch.

The Two Frenchmen have two completely different styles. Le Toux, naturally fit and athletic, built his reputation on hard-work. Hassli, an enigmatic character, depends on his physical presence. The pair have been operating in the middle of the pitch with Eric Hassli as the target-man. With the exception of the fourth-minute goal vs Montreal on opening day, the Hassli-Le Toux combination hasn’t worked. It’s far too early to pontificate on the intricacies of a forward partnership but questions will linger if the Whitecaps attacking weapons continue to misfire.

Perhaps the teething problems are a blessing in disguise, but it’s frustrating that the Whitecaps have missed out on a 100% record to start the season. As goalkeeper Joe Cannon said:

Potentially, we could be at nine points right now and that’s a little troubling and a little frustrating because we know how valuable points are, especially at home.

Vancouver were the better team in all three of their matches and, with a few adjustments, will soon hit form. The Whitecaps now travel to face Philadelphia Union & San Jose Earthquakes in two consecutive away matches.

One thought on “Whitecaps FC – unbeaten after three MLS matches”