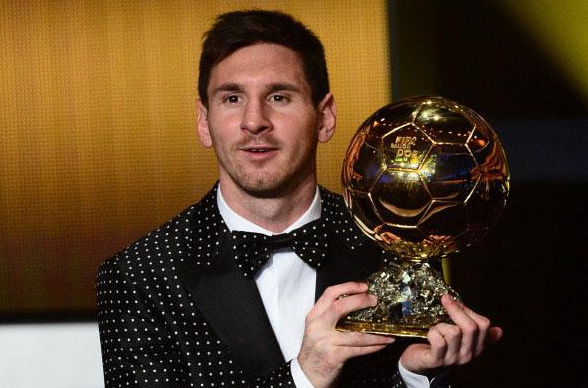 You don’t need me to sit here and tell you how good Lionel Messi is. He is quite simply the Greatest. On the back of his fourth consecutive Ballon D’or, I thought I would run through a brief history of his career and life to give you some insight into the man behind the magical boots. Starting back in his childhood…

Messi was born and spent the early part of his life in Rosario, the biggest city in the Sante Fe province of Argentina. He and his two brothers and one sister lived in a typical Santa Fe house in the Barrio Las Heras neighbourhood. His father was a steel worker and his mother a cleaner. It was a humble beginning for the man who would be the greatest ever and provided no particularly advantageous conditions in which to flourish. He played football on the street with his brothers and cousins against other family teams. From the age of 5, Messi showed signs of what was to come. His older, much bigger brothers struggled with his skill and ability to keep the ball and he would join in against much older opposition provided they were not too fierce in the tackle!

“I got given my first football when I was very young: three, maybe, or four. It was a present and from then on it was the only present I ever wanted, Christmas, birthday or whatever: a ball.“

Messi soon joined his first local football club, Grandoli, which featured many of the Messi family throughout the age groups including his uncle who played for the senior team.

“Immediately he started to attract a lot of local attention,” says David Trevez, the president of Grandoli. “He was so different from the rest. He would get the ball, go past four or five players and score. For a kid that age, it’s very rare to be able to do that.”

Messi was also a favoured pupil at his local primary school. Although he sometimes suffered from shyness, it was out on the pitch where his teachers noted his leadership ability.

“At playtime he would show this amazing ability at football, he would become the leader of the group out there. He felt more at ease on the pitch than in the classroom,” said his primary teacher Diana Ferrato.

It was by chance, and the pushy hand of his Grandmother, that Messi was first able to catch the eye of the local footballing community. Too young to be eligible for the youngest age group, when a space became available in one of the older teams due to illness, Messi’s Grandmother volunteered the youngster to play. Following on from his debut, Messi became well known in the neighbourhood amongst the other children and his brother’s no longer needed to withdraw him from street kick about’s for fear of menacing tackles and intent. He could now flourish as a pure footballer and flourish he did!

Messi , back row left, lining up for Grandoli.

At the age of 9 he signed for Newell’s Old Boys, once home to Argentine Legend Diego Maradona. He became a vital component of “The Machine of ’87″, the nickname given to his team who were all born in 1987. The nickname stemmed from the fact that they lost only one match in four years. But the major turning point in his life came at the age of 11. Newell’s discovered that Messi was suffering from a growth hormone deficiency. It was the lack of money available to both Newell’s and powerhouse Argentinian club River Plate that led to Messi heading to Europe to the only team who could afford to and agreed to pay for treatment for the condition. That club was Barcelona.

Carles Rexach, sporting director at Barcelona, agreed to arrange a trial for Messi. At $900 a month, the medical bill for his treatment needed to be worth the investment. It took one showing to convince the club to sign him up. Infact, such was the strength of his showing at the trial, it is rumoured that Rexach offered Messi a first contract written on a napkin due to the inavailability of any paper! Messi and his family moved to Spain to continue his pursuit of a career in football.

In 2000, he completed his first season for the academy known famously as La Masia. In the 3 seasons to follow, he appeared for both Barcelona junior Infantil B and Cadette B & A teams, which included an impressive return of 37 goals in 30 games for the Cadette A team. From 2003 onwards, Messi appeared for every one of the chain of the teams leading to the first team. Starting with the Juvenil B, he progressed to the Juvenil A where 21 goals in 14 matches earned him a place with the Barcelona C team. Further goals and impressive displays quickly led to his promotion to the Barcelona B team. On November 6th 2003, Messi was promoted again to the Barcelona A team, now within touching distance of the first team 11.

Messi and his La Masia team mates, many of whom he shares the field with for Barcelona today.

Messi was a part of a group of youngsters who still play for Barcelona today. Pictured above with Cesc Fabregas and Gerard Pique, he was noticed early on even amongst such great players.

“Some of the coaches told us not to tackle him too hard so as not to injure him.  But even if we wanted to, we couldn’t get anywhere near him. He was so quick, he  was impossible to tie down.“ – Gerard Pique

With his star shining so bright, Messi became a target for his opposition, something he still lives with and rises above today. Messi suffered a fractured cheek but came back even stronger and produced the kind of football he does today to propel himself into the Ballon D’or spotlight. But like the great George Best and Diego Maradona, like his fellow modern day great Cristiano Ronaldo, Messi soaks up the pressure and manages to avoid injury in the face of fierce and dangerous tackles.

From his debut against Porto for Barcelona in a friendly, Messi did not have to wait long to make his full debut. On October 16th 2004, he was handed his long awaited appearance against Espanyol by then manager Frank Rijkaard. The rest, as they say, is history.

Congratulations to Lionel Messi on his 4th consecutive Ballon D’or. It is thoroughly deserved and nobody could argue with the result. A true footballing legend and still only 25. Long may he continue to provide the spark and energy that fuels our love of the game.

One thought on “Where it all began for Leo”