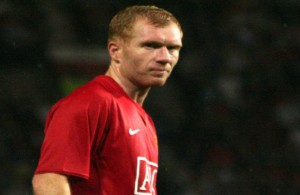 For Irish and British football fans, Manchester United has been for many years the reference club and the standard bearer for “greatness” in football.

In Spain, the reference club for football fans has been Barcelona for many years. At varying points over recent decades, both clubs have been the reference club as well as the standard bearers for all of Europe and indeed the rest of the world.

Following the 2009 Champions League final in which the Catalans were utterly dominant (and completed a “perfect year” that calender year by winning the six cups they competed for) over their Mancunian opponents, man-of-the match Xavi, former United man Gerard Piqué and Iniesta, among a host of other Barca players all battled for the right to swap and take home Scholes’ United shirt at the end of the game. The ginger magician had only come onto the pitch with nine minutes to play and had little or no impact on that game at Rome’s Stadio Olimpico, but such was the esteem with which he was held by Blaugrana‘s players that his was the shirt everyone wanted to get once the match had ended.

The previous season, United faced the Spanish giants home and away in the Champions League semi-final (and of course a two-legged tie is a truer indication of the balance of power between two sides than a one-legged final). With the sides deadlocked following a scoreless first leg at the Nou Camp, they were separated at Old Trafford by a sumptuous strike by the man for the big occasion; Paul Scholes. Scholes was of course instrumental throughout that tie and would continue to play a pivotal role for United as he had done since the mid 1990s until his career was finally ended by a recurring knee injury.

That 2008 semi-final was the sort of tie where either an error or a moment of brilliance was the most likely method of separating the sides. In the end it was a moment of both error and brilliance that made the difference as Gianluca Zambrotta failed to clear his lines properly. The ball fell to Scholes’ feet some 25 yards out and he proceeded to pick his spot and smash a shot high into the top corner of Victor Valdes’ net for the only goal of the tie.

That game was typical of Scholes’ career at United. An ever combative force, Thierry Henry cited Scholes as “Always in my face when we played United. Unquestionably the best player ever to play in the Premier League.” If there was one part of his game where Scholes lacked it was the tackle and it was the ungainliness of his tackling which cost him a place in the 1999 Champions League final.

The statistics of Scholes’ career tell a lot. Only Ryan Giggs has made more appearances for Manchester United, though surely even the Welsh man would agree that it is the Mancunian who has had the greater impact at his local club.

The only lingering regret Scholes might have from his playing career is that his international career didn’t last longer. Like Giggs (who as a Welshman would never feature at a major tournament every second summer and thus would have greater chance to rest in the close season), international football’s loss was definitely club football’s gain and there is little doubt  that both players’ professional playing careers would have ended several years ago had they continued playing international football whilst also playing for The Red Devils.

So Paul Scholes has now retired from professional football and he has left the bright lights of top flight football with the typical quiet and shunning of the limelight that he entered it. He had of course planned to exit centre stage some weeks before he made the announcement public last week.

One suspects he would have been “chuffed” (to coin a local phrase) by all the hype and hoopla surrounding Sir Alex Ferguson’s departure from the Manchester United manager’s seat as it of course took most of the spotlight off of the shy 38 year-old. Any spotlight that was shone on you though was deserved Paul because as a player you were the brightest of bright stars.

One thought on “Is Paul Scholes the Premier League’s best ever player?”