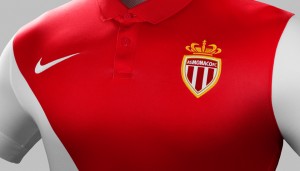 This time of year is usually labelled, by some uninformed souls, the rare period in which football enters hibernation for a short period before awakening in a bloodthirsty rage to devour the internet and whats left of print media. In truth football never sleeps, its big wheel keeps on turning, presumably providing the power source to allow transfer rumour mill to rumble on. In addition to the glut of ‘player X spotted in a service station near club Y’ stories are the annual unveiling of the new uniforms that all but a handful of teams will be disappointing their respective supporters in this season.

The reactions to the glut of images of new jerseys – usually worn by players trying their best to look moody in front of a smoky backdrop – has revealed an interesting trend. Increasingly the first thing commented on is not the intricacies of the design or the quality of the badge, but actually the corporate sponsor that sits front and centre.

Ever since Günter Mast, the nephew of Jägermeister creator Curt Mast, had a financial lightbulb moment back in 1973 and paid local club Eintracht Braunschweig for the privilege of emblazoning the club’s shirt with the liquid memory-cleanser’s famous logo, shirt sponsorship has become a lucrative revenue stream for football clubs – with companies paying well into the tens of millions to have their name on the sweaty chests of football’s superstars.

And rather predictably, as clubs become corporate enterprises themselves, the increasing piles of cash being offered to clubs results in increasing demands on how many square inches are attributed to the company offering the riches. Whilst european clubs haven’t yet reached the billboard-esqe proportions of the teams from Argentina and Brazil the wheels seem to be somewhat in motion – Barcelona, once the bastion holding out against shirt sponsorship, will have three commercial entities adorning this season’s jersey.

Which brings us back to the reactions to this season’s jerseys that were unveiled in the past month. Interestingly enough the jerseys that have elicited the most positive responses are those of Monaco, Roma and Nottingham Forest – all those shirts share one common trait, for the time at least that have no sponsor, though in Forest’s case a sponsors being sought, but for the while the jersey is available sponsor-less. Interestingly, manufacturers such as Nike and Umbro are increasingly releasing images of their creations without the sponsors, perhaps suggesting that they feel their designs are best showcased without a corporate addition.

Beyond the rarities that remain unadorned with corporate logos the jerseys that are best received are those in which the design and sponsor sit in an aesthetic balance – the likes of PSG’s or Inter Milan’s. Those shirts illustrate how given the right choice of colours and styling a sponsor can add to a shirt’s design rather than take away from it.

Some sponsors can become ubiquitous with a club’s most famous shirts. A recent tweet from IBWM posed the question that certain sponsors are iconic to clubs. The various responses seemed to affirm this notion – take, for example, Ajax’s shirt from the mid-90s. The ABN-AMRO sponsor could have taken hold over the shirts’ design. Instead it was assimilated into the traditional design and thus itself fell into the folklore surrounding the club. 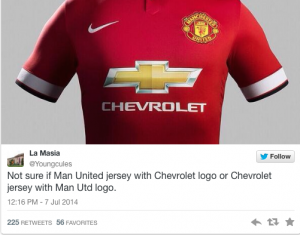 At the other end of the scale are Manchester United, whose new shirt has provoked a rather less than warm reaction. There are larger shirt sponsors, but few look more out of place than the Chevrolet logo. The sponsorship deal is worth £53 million per year, something not be sniffed at considering the lack of Champions League revenue, so one expects the American auto giant would want a bang for its buck. But a simple compromise – make the logo white and black to match the jersey colour scheme for example – would have probably resulted in a better outcome for what is essentially a public relations exercise.

To unveil the new shirt the car firm produced a film featuring club legends such as Sir Bobby Charlton and Dennis Irwin intermingling with different eras of Manchester United fans wearing some of the iconic jerseys in the club’s history. Of note is how well previous sponsors such as Sharp and AON sit on some of the previous shirts – Chevrolet, emblazoned in gold, looks brash, obtrusive and a bit tacky by comparison.

Given the popularity of jerseys with no sponsor with fans, perhaps a possible solution would be to give the fans an option. The jerseys adorned with a sponsor could be available at a cheaper price, subsidised by the revenue generated by commercial deal, whereas the sponsor-less jerseys would command a higher premium, but be more attractive to kit-nerds or traditionalists, in a similar vein to the ‘match-wear’ incarnations that are available for numerous teams. Fans of the Irish national team – whose shirts are only sold adorned with a FAI sponsor, a situation unique in international football – would surely jump at the chance to wear their country’s colours without being reminded of the teams association with 3 mobile.

Despite what Twitter may suggest, football fans can be a rational bunch – at least some of the time – and most understand shirt sponsors are a necessary evil to fund their club’s aspirations of glory. But what sponsors and clubs may be mindful that a poorly judged logo can do more harm to the respective brands than good.