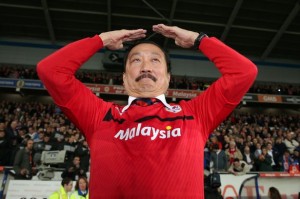 The spate of manager sackings in the past few weeks has briefly distracted football fans away from the most intriguing title race for years onto the backroom politics of struggling Premier League clubs. This season the managerial roundabout could be in danger of breaking down, with the speed at which managers are getting on and off.

And these days it’s not just poor results that can cost a manager their job, increasingly managers are falling out with club owners over commercial decisions that they believe are not in their club’s best interests. The two highest profile rows this season have involved Cardiff City and Hull City and managers Malkay MacKay and Steve Bruce.

MacKay and Bruce have been playing the part of the middlemen as fans of the two clubs have held protests against decisions taken by the owners to alter fundamental aspects of their clubs’ identity. Last season Vincent Tan’s decision to change Cardiff City’s home kit from Blue to Red and their nickname from “The Bluebirds” to “The Dragons” to make the club more appealing to a global audience, was met with widespread outrage amongst Cardiff fans. This season, Hull City owner Assem Allam has this season met with similar hostility with his decision to rename the club Hull Tigers for similar commercial reasons.

As the Premiership has transformed from a football league to a globally marketable product with a license to print money, big clubs like Manchester United, Arsenal and Chelsea have found foreign markets to be incredibly lucrative. Every self-respecting club now organizes an annular Far East or US tour as part of their pre-season preparations, simply to raise their profile in these emerging markets. For the smaller clubs like Hull and Cardiff, cashing in on this market seems to make commercial sense and the changes made by the owners probably will make them more marketable overseas.

But at what cost? Football teams must be run efficiently to survive. Tan may have helped Cardiff climb into the Premier League and Allam may have saved Hull from the brink of collapse, but that should not give them carte blanche to mould their clubs to their own liking. When fans object to changes of name or badge, they are protesting the identity of the club, something that is fundamental to their own identity and that of their community. Managers end up caught in the middle McKay and Bruce have done a commendable job in arbitrating between their fans and their employers.

To see how commercialization can tear the soul out of sport, one need only look to The USA. There the business of sports is taken to a level beyond anything seen in the Premier League and the rules of the game are altered to fit television advertising schedules. The commercialisation of sport in the US is summed up by the fact that sports teams aren’t even called teams. Instead they’re called “Franchises”, a subtle difference but an important one. The term Franchise conjures up images of boardroom meetings with shareholders, where the company profit is the bottom line, rather than the community minded football club.

Sports fans in the US are so disenfranchised and disconnected from the decisions made at their clubs, that franchises regularly uproot themselves from their local community to move to a new city in order to exploit new commercial opportunities. Decisions like this are usually met with protest from die-hard fans and moves can create bitter grudges. Fans of The Baltimore Colts were outraged after owner Robert Isray moved the to Indianapolis with no warning in March 1984. Baltimore then attracted Cleveland Browns owner Art Modell to move his franchise to the city in 1995, where they were renamed the Baltimore Ravens. Fans of the Colts, Ravens and Browns now hold a bitter three-way rivalry, but manner in which franchises can abandon their fan bases so easily shows that the commercial interests of the owners always trump the interests of the fans.

Seems difficult to imagine in the Premier League as clubs’ identities are far more rooted in their local communities, but teams upping sticks for pastures new is not unprecedented. In 1919 Arsenal moved from South to North London in search of a larger stadium and more recently, Wimbledon FC relocated to Milton Keynes in 2004 and were renamed Milton Keynes Dons. The latter of these two moves particularly enraged local Wimbledon fans, many of who went on to set up a new team, AFC Wimbledon, who currently play in League 2.

The manner in which Wimbledon owner Pete Winkleman relocated and renamed the team, robbing the fans of their identity and dividing the local community, should stand as a warning against the over-commercialisation of football. With foreign owners interfering more and more with the identity of their football clubs, the likes of Hull and Cardiff could soon find themselves the victims of a similar fate.

Managers like Steve Bruce and Malkay MacKay should be celebrated for trying to represent the interests of the fans against those of the owners, but we as football fans have a role to play too. Aside from the usually banter, most football fans have shown sympathy with the fans of Hull and Cardiff, but this does not go far enough. All football fans should be joining those on the terraces of the KC Stadium and The Cardiff City Stadium in protest at these changes because there’s much more than just a name or a club badge at stake.

One thought on “What’s in a name? Why all fans should stand up to meddling owners”