The opening four games of the Confederations Cup have been and gone, with the four favourites in each match running out victorious.

Hosts Brazil scored early goals in each half before running out 3-0 winners against Japan, Italy and Spain emerged with 2-1 wins against Mexico and Uruguay respectively before Nigeria routed plucky Tahiti 6-1 in Belo Horizonte.

But what, if anything, did we learn from the four matches ahead of the quick turnaround which sees matchday two begin on Wednesday evening? Here’s a look at a few things:

Hulk remains an ill-fitting selection for the Selecao 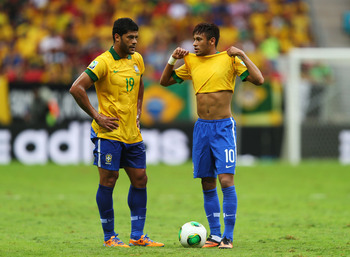 Luiz Felipe Scolari’s Brazil may have enjoyed their opening evening with a 3-0 win against but they remain very much a work in progress. It appears the ex-Chelsea boss is set on a 4-2-3-1 but the identity of the attacking triumvirate behind lone striker Fred continues to raise questions.

Neymar, the 21-year-old golden boy of Brazilian football is a certain starter – although his role still needs to be fully defined as to whether he plays from the left or as a number 10 – whilst Chelsea’s talented Oscar continues to see his star rise. The duo at times appear to have an almost telepathic understanding which if harnessed could have Brazilian supporters purring, not only for the remainder of this tournament but for years to come.

Nevertheless, the burly figure of Hulk playing from the right continues to be a source of frustration. A player of tremendous physical prowess and a sledgehammer shot, the Zenit forward is proving more of a hindrance than a help, his eternal want to shift inside onto his favoured left foot only helping to overcrowd the central areas in the attacking third. His presence merely served to create more traffic for the likes of Oscar and Neymar to go through.

The PSG winger Lucas Moura was handed a standing ovation upon his arrival in Brasilia on Saturday evening when he stepped off the substitutes bench. The speedsters preference for hugging the touchline and driving towards the byline would offer another, more direct outlet for Scolari’s side. Additionally, it would stretch opposing backlines and free up space in other areas for the likes of Neymar and Oscar to take advantage of.

Intensity the name of the game for Spain

For almost 75 minutes on Sunday evening 2011 Copa America winners Uruguay couldn’t live with Spain. Navigated by the wondrous talent of Andres Iniesta, La Roja were irresistible and deserved to perhaps have been further than two goals in front, such was their domination. Although the finishing was somewhat wayward, there was a glorious intensity and incision about their approach play – a far cry from the World Cup qualifying draws against Finland and France, as well as the recent friendly against Haiti.

However, here’s the rub. In the final 15 minutes, when Uruguay decided to give it a go and attack their illustrious opponents and Del Bosque’s side very much eased off the pedal, the Spanish could have been caught. Luis Suarez wonderful free-kick reduced the arrears and gave the South American’s hope of an improbable comeback.

Of course, the Spanish held on and but for poor refereeing would perhaps have scored again; Gonzalez challenge on Soldado should have been a red card and a free-kick on the edge of the area. But having been so poetically magnificent for so long, the world and european champions should have been firmly out of sight and not even given Uruguay a sniff in those final minutes.

Perhaps it was merely a case of things having been a little bit easier than they’d thought they would be on the night, but the considerable drop in intensity late on was somewhat startling. If that becomes a habit, then better sides may well punish them.

During Italy’s 2-1 success over Mexico, Andrea Pirlo was head-and-shoulders above anyone else on the pitch. The Juventus playmaker was nothing short of outstanding. 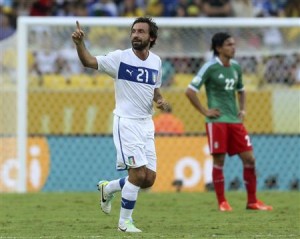 Now 34, the man christened “the Architect” by Azzurri teammates in years past became the darling of the Maracana in a performance which was a joy to watch. Dictating proceedings from his preferred regista position in front of the back-four, Pirlo was always available to receive possession, distributed reliably and put on a show of individual magnificence, fully showcasing his fabulous passing range.

On his 100th cap, his delightful first-half free-kick was just reward for an 11-year international career which is the envy of all but very few such has been his level of success.

Cesare Prandelli’s side will have an interesting evening against Japan on Wednesday with the Asian side needing a win to have any chance of progress. But if Pirlo continues with the wonderful swagger that was on such glorious show in Rio de Janeiro, then don’t back against Prandelli’s side doing enough to secure qualification for the knockout stages before their final group match with hosts Brazil.

Conundrums for Messrs. Keshi and Tabarez to solve ahead of meeting

Nigeria, Uruguay and Japan may all have enjoyed vastly differing fortunes in their opening fixtures, but the three nations respective manager’s all have some intriguing decisions to make ahead of their next games.

Nigeria may have ran home 6-1 winners against Tahiti, but Stephen Keshi cut a frustrated figure, most likely due to his side’s laxadaisical attitude throughout. An African Cup of Nations success based on solid defence and lightning-quick transitions has set the platform that they’ll need to be reminded of ahead of a tough match with Uruguay.

Without two stars of that success – Victor Moses and Emmanuel Emenike – Keshi must cover for the absences of their two best attackers. CSKA Moscow’s Ahmed Musa and Dynamo Kyiv’s Brown Ideye would appear the logical options, but neither covered themselves in glory against Tahiti, such was their lack of killer instinct in the final third.

Uruguay manager Oscar Tabarez, one of international football’s most interesting tactical manager’s also has a big decision to make with regards his strikeforce. Edinson Cavani’s international form has been lamentable in the past 18 months – four goals in 16 senior games – although he did net in the recent World Cup qualifier against Venezuela, in the absence of Luis Suarez. However, whilst Suarez scored and looked a threat against Spain, Cavani again struggled to impose himself. The duo quite simply continue to struggle to form a cohesive partnership.

Diego Forlan, such an important figure alongside Suarez at the 2010 World Cup – when he won the Golden Ball – and at the 2011 Copa America didn’t start against Spain. His club form hasn’t been inspiring since he left Atletico Madrid, but 10 goals in 15 matches for Internacional in 2013 show he still knows where the goal is. Also, his preference of dropping into space and dictating play from an advanced midfield position offers La Celeste greater attacking variety. Having struggled for fluency against Spain, perhaps Tabarez would be well served by going back to the Suarez/Forlan partnership for a must-win match with the African champions. 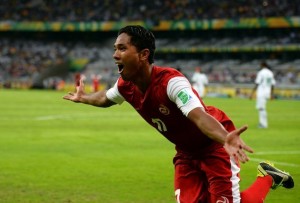 The worry about Tahiti’s arrival at the tournament was that they would go with the San Marino approach and stick 11 men behind the ball and be content to keep the score down.

Instead, they attacked and asked questions of Nigeria, and no goal in Brazil this month will be greeted more happily by neutrals than that of Jonathan Tehau. The defender’s towering header was just reward for the Pacific Islanders attacking intent and courageous efforts.

Next up for Eddy Etaeta’s team of amateurs (and Marama Vahirua) are Spain at the Maracana, the sort of match they could only dream of.

If they give it a go against the reigning World Cup winners, the plucky French Polynesians will only make further friends, regardless of the outcome.