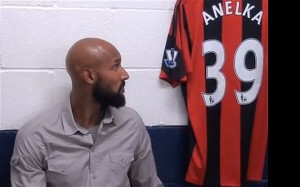 This week the English FA finally brought a conclusion to the case surrounding West Brom’s striker Nicolas Anelka and his quenelle gesture during last year’s match against West Ham. Unless the Frenchman and his club decide to appeal, Anelka will begin a five-match ban for making what is described as an inverted Nazi salute, and has strong anti-Semitic connections. Although this is seen as a victory against racism in football, and the FA finally coming down hard on offenders, it has been a miserable state of affairs in which West Brom has disgraced itself.

The fact that the whole process has taken nearly a month to resolve has angered many critics who believe that a lack of swift action demonstrates all the problems the FA has with dealing with these kinds of issues, but it now seems that they have consulted many anti-discrimination bodies before deciding to drop this heavy sanction on Anelka. The striker claims that he was making the gesture to support his friend Dieudonne M’bala M’bala, a French comedian who says the sign is an anti-establishment symbol, and was ignorant to its Nazi-connotations and the offence it has caused the Jewish community when people make the sign outside of synagogues and Holocaust sites.

Being ignorant of what the quenelle entails isn’t something unique to Nicolas Anelka, as almost everyone watching the match between West Brom and West Ham probably wouldn’t have even seen the gesture before, let alone understood what it meant (the BBC made no note of it in their report of the game). However, that is no reason to excuse the incident. All racism is born out of ignorance, and the only way you will eradicate it is by educating people about the way in which certain actions offend people, which is exactly what Anelka’s punishment will do. Now it would be fair to say that most of the British football community understand what the quenelle is and that it is deemed offensive.

All of this information became available early on when reports about M’bala M’bala reached the British press and the public learnt about his past, his routine and about the quenelle, and so many people could foresee that the FA would need to act and punish Anelka. Everyone apart from West Brom it would seem, who have had no issue in playing the French striker ever since the incident. Even if the club wasn’t convinced by what they heard in the press about the gesture, didn’t the warning from their main sponsor Zoopla, which is owned by a Jewish businessman, make it evident that it was offensive? Clearly not, as Anelka played on Monday evening against Everton, and thus the club will lose out on a lucrative sponsorship deal at the end of the season because of that decision.

West Brom will point to the fact that they were awaiting the FA’s investigation into the matter, but why? Nothing stops the club from looking into the incident, realising that the quenelle is an offensive gesture, and suspending Anelka from the first-team either until the investigation is concluded or for whatever set amount of time they deem a reasonable punishment. Even if that wasn’t five games long, at least it would have shown some moral fibre from the club and told fans that they do not tolerate any kind of offensive behaviour.

Unfortunately the reason is pragmatism. Even if West Brom didn’t think Anelka deserved a ban, they certainly weren’t going to suspend the player for the four games between December 28th and January 20th just for the English FA to suspend him for a further five matches until March 1st, because they would have to pay the high wagers of a striker they desperately needed, which is of more importance to them. The FA can try and implement whatever project it likes to combat disrespect towards referees, cheating on the pitch or racism, but until football clubs start believing that they are in anyway morally responsible for those things, the situation will never change.

It is not in a football club’s interests to suspend players or management for misdemeanours because that hinders their team’s performance on the pitch, which can then result in losing points, which results in a loss of league positions, and which will ultimately result in a loss of pounds on the balance sheet. The Premier League doesn’t award points for respect, it awards points for winning.

When Marlon King was released from prison in 2010 after serving time for sexual assault, he signed for Coventry City, whose fans protested the decision because of the message it sent. However, after 12 goals in 28 games I’m sure the management at Coventry felt justified in their decision because they gained on the pitch. The same protests happened again when he joined Birmingham City, but once again the most important thing for the club’s elite was that he scored 29 goals in 67 games.

Nothing can make clubs care about these sort of things. The FA’s Respect campaign has seemingly been forgotten about this season where you have managers at the biggest clubs claiming referee bias, and where every week on Match of the Day you have a diving debate, and incidents such as Anelka’s. But in none of those cases has the club involved decided to take it upon themselves to show respect to any area of the game and take action. It would be a brilliant, belated New Year’s resolution if clubs decided there was some value to earning the respect of those in the stands.