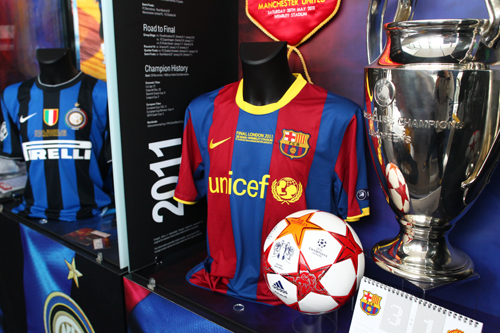 Items belonging to Europe’s most iconic names in football from David Beckham to Alfredo Di Stefano are on display at Wembley Stadium as part of a new ‘Exhibition of Champions’.

Since 1963 Wembley Stadium has hosted a total of six UEFA Champions League Finals including the most recent final in May. A record breaking audience of over 300 million people tuned in worldwide to see Barcelona take on Manchester United at Wembley and TV ratings in the UK reached a high of 11.1 million, while it also drew in an audience of 4.2 million, a 91% increase on figures from 2010.

Following the success of this final Wembley was again chosen by UEFA to be hosts of the final in 2013 – the 150th anniversary year of The Football Association.

The ‘Exhibition of Champions’ features over 700 artefacts including:

The Wembley Stadium Tour has welcomed millions of sports fans since it first opened in 1978 and now from this week visitors can enjoy the  ‘Exhibition of Champions’ as well as the England changing rooms, players tunnel, trophy winner’s steps, press conference rooms and Wembley’s famous Royal Box.

To book a place on the Wembley Tour and see the ‘Exhibition of Champions’ visit www.wembleystadium.com/tours or call 0844 800 2755.