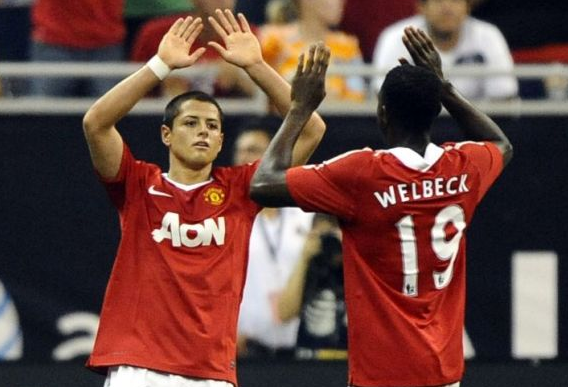 With the season edging closer to ‘squeeky-bum time’, Sir Alex Ferguson is facing a selection dilemma he may not have expected at the start of the season – who to partner Wayne Rooney.

With Dimitar Berbatov seemingly content to warm the bench waiting for the opportunity to face weak opponents at Old Trafford, and Michael Owen unsurprisingly injured, Ferguson has both Danny Welbeck and Javier Hernandez competing for the starting place up front. Both are exciting options and allow Rooney to play a deeper role, advantageous to Manchester United as he can support a midfield that is often overrun or undermanned.

Whilst the Glazers’ financial constraints on United has led to a depletion in midfield options, proven by the (possibly crucial and so-far smart) return from retirement of Paul Scholes, the emergence of these two strikers could become a blessing from this hindrance. Knowing that they cannot compete with the big spenders Madrid and City, United have recently been forced to scour the globe for bargains and cheap risks, which was hugely profitable in the signing of Hernandez, who immediately repaid his £7 million transfer fee in his first season alone.

Welbeck, on the other hand, has benefited from the opportunity of first team football that would arguably be denied of a reserve player at the big spenders who prefer the glitzy signings. Welbeck has capitalised on Ferguson’s trust and arguably is a wiser first team choice than Hernandez. He offers United something different in his strength, combined with a great touch, allowing him to shield the ball effectively. His non-stop running always gives options to midfielders and he has a gangly dribbling style that could intimidate the more immobile defenders, represented in his exciting recent first-half home performance against Liverpool.

Welbeck is better than Hernandez at supporting the overall play, through his willingness to track back and ability to hold the ball up. He seems to have more of an understanding with Rooney and is more often featured in whole-team moves, shown even since the start of the season against Spurs with a brilliant back-heel to Anderson.

The Mancunian’s weakness is definitely Hernandez’ strength. Whilst Welbeck can often snap at chances (for example at Norwich), looking like someone who needs a few chances to score, Chicharito has not lost his brilliant finishing ability, despite some arguments that he is suffering from ‘second season syndrome.’ From Swansea to Chelsea, Hernandez’ coolness, quick feet and incredible heading ability considering his height, means that he is a much more effective out-and-out goalscorer.

Overall then it would be more productive for United to start important matches with the energy and dynamism of Welbeck, who can contribute to a collective team effort and trouble defenders with his strength in the typically cagey first halves. Then, Hernandez, who has often been compared to super-sub, Ole Gunnar Solskjaer, could replace the youngster at a time when defenders are tired and the game is more stretched, using his goalscoring instinct to grab the winner. Ferguson would wish it was only that simple but at least he can feel assured that he has a selection problem that, for once, does not revolve around injuries or a lack of resources.