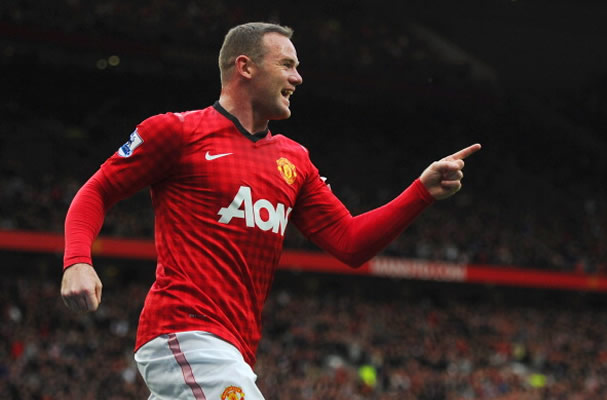 Wayne Rooney was the biggest casualty of Ryan Giggs’ third minute penalty for Manchester United against Fulham in the FA Cup. The spot kick set the Red Devils on their way to a routine victory over the Cottagers, but sent a huge message out to the football world that Rooney is no longer the number one player at Old Trafford.

In years gone by, even when Cristiano Ronaldo was at Manchester United, Wayne Rooney was the fulcrum upon which Sir Alex Ferguson’s team turned. This season that has changed due to a number of contributing factors from injuries to indifferent form. However, the most important factor of all has been the arrival of Robin van Persie from Arsenal.

Van Persie has joined the Red Devils at a time when he is rightly compared to the likes of Ronaldo and Lionel Messi in terms of his overall play and goal-scoring ability. This term he has waded in with an incredible 18 goals and nine assists from 23 matches and has played the full 90 minutes in all but four Premier League games.

Rooney on the other hand has scored just seven goals and has contributed a handsome seven assists from 15 games, but has crucially only played seven full matches. If anything, Rooney’s horror injury sustained in van Persie’s home debut against Fulham, in just the second game of the season, proved hugely beneficial to van Persie.

The absence of Rooney between Aug. 25, and Sept. 29, gave the Dutchman time to settle but it also removed pressure and doubt over his selection. From there a foundation for a successful season was set in stone.

There can be little doubt now that van Persie is one of the first names on Sir Alex Ferguson’s team sheet and that he is more than comfortable in any of Ferguson’s tactical selections.

For Rooney that month spent on the sidelines gave his team mates the time to settle with a new striker at the helm. As a result small intricacies on the pitch have developed between van Persie and his fellow players to such an extent that they can now survive without Rooney.

That has never been the case since Rooney joined the club in 2004.

When Rooney’s contract negotiations came to the fore in October 2010 the club moved heaven and earth to get him to stay.

If that situation were to arise tomorrow it is highly debatable whether Ferguson and the club would move as far as they did at the time. The latest small but hugely significant step in reducing Rooney’s importance at the club was seen by the world against Fulham.

Wayne Rooney was removed from his penalty taking duties.

His future as United’s dedicated penalty taker has been under debate for some time now. Considering the stature and respect Rooney commands as a player his record from the penalty spot reads as having taken 27 and missed 10 since 2004.

Those two converted penalties may seem insignificant but when you analyse Rooney’s goal-scoring contribution without them it becomes far less accomplished. Going further all you have to do is realise that Manchester United lost the title on goal-difference last season.

Where the removal of penalty duties will be felt most will not be on the pitch, it will be in Wayne Rooney’s wallet.

Without those guaranteed two to three goals a season, his goal-bonus will take a slight hit. However, it is when contract negotiations come up next that this loss will be seen most. If Rooney cannot guarantee a return of goals as a striker, he has only twice exceeded 20 goals a season and has generally scored 12 goals per other seasons, he will be in a severely weakened negotiation position.

Ferguson would be loath to allow the 27-year-old, whose contract is up in 2015, to hold the club to ransom a second time.

If Rooney does not return to penalty taking duties on a regular basis soon it will be a sure sign that contract negotiations have subtly begun.