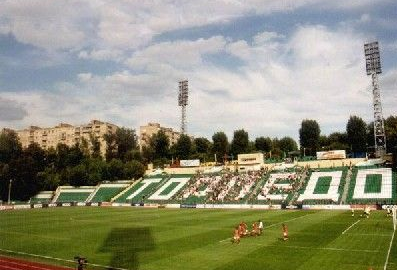 The last two Mondays I enjoyed evenings out with a colleague at the quaint old Streltsov Stadium in South-East Moscow.  I’d been here before to watch the rich man’s toy (with good intentions) FC Moscow, play before a few thousand fans against a Vladivostok team now in the third tier of professional football.  FC Moscow were not so lucky, a remnant club, formed around some office staff and extreme fringe players, now turn out in a Moscow city league 10 levels below the Premier.  But the stadium, traditional home of Torpedo Moscow, next to the ZIL factory is a nice spot for a night out with supporters who know their football and have persevered with a club that has had more makeovers than an X-Factor hopeful.

When you leave the Autozavodskaya (Auto Factory) metro, you walk down a pleasant street with scattered cafe’s in an area that can be termed middle class.  You pick up your ticket from one of the holes in the wall to the left of the entry gate and proceed passed clay and hard tennis courts to your right, an all-weather pitch to the left and scattered buildings including a cafe, shop, gym and office block.  The stadium is straight ahead and around it are more all-weather pitches, where pro’s and amateurs enjoy basic facilities and good surfaces.  The stadium is all-seater with two main stands on either side of the pitch and smaller seats set into buildings at each end.  There is a homely, family atmosphere and it’s not unusual to see children kicking football on the pitch after matches.  The chief tenants, FC Torpedo Moscow, are battling away in the Football National League (2nd tier) and are led by the former International and Premier star Denis Boyarintsev.  After successive promotions from the 4th tier, Torpedo finished 8th in the drawn out 2011-12 season but this year have struggled for goals and form.  Everything goes through the captain and even at 34 he shows the class and ability lacking even at the Premier level.  Against Petrotrest from St. Petes they left it very late with the captain popping up for a cracking winner, this 1-0 win was followed by one of the most terrible matches (against Volgar Astrakhan) I’ve had the misfortune to witness in which neither team deserved a point.  It ended 0-0 and highlighted the sheer ineptitude of both sides front lines.  No more than 1,500 were at both matches, 20 came up from Astrakhan and 10 down from St. Petes, both sets were kept in a darkened corner of the stadium to sing their hearts out.

Then came last night and the much talked about cup clash with Dinamo Moscow.  It was being covered live on national TV and since my colleague was heading away today to Barcelona, and I had work to do at home, I decided to give it a miss.  Two Dinamo fans I know were going in and they promised to grab a program for me, and give a wave if the camera caught them.  It was still bright when the supporters filed in and there was a bumper crowd expected.  Then a text – “Group of idiots gathered, threw bottles at the ticket line. Now cops here, chased them away.”  Minutes later another text – “Idiots back, now another group looking for a fight, police protecting kids.”  On TV there was nothing and before the pre-match coverage began I got a call, two groups had a brief clash immediately outside the gate, by-standers kicked to the ground, no serious injuries but the police had called in reinforcements.  My friends were going in anyway, there was no segregation in evidence, opposing supporters were huddled together (they said) and when one Torpedo-scarved idiot ran to attack two Dinamo-shirted teens Torpedo supporters stepped in.  This, thankfully, was caught on camera phone and has been broadcast today.

Watching at home the scene looked well, the idiots who wanted to prove their manhood size was not miniscule were scurrying away as the OMON (heavy police) came on the scene.  It was going to be a big night as Dinamo badly needed a win to turn their season around.  And it began well, a goal from Dinamo’s Vlad Rukov caused a mini-eruption and a flurry of flares were thrown from the stands.  The ground was a little over half-full and the “ultra” part of Torpedo’s support seemed to have swelled and it was crystal clear that regulars were trying to keep order over the new recruits.  The match was halted while matters settled.  Rukov’s second goal looked like it had settled the tie and more flares rained down.  The commentators were despairing, the officials were lost and even police intervention was not going to settle it down.  And then the unthinkable happened.  Torpedo came out for the delayed second half and took the game to their crosstown rivals.  That man, Boyarintsev, pulled a goal back and the home fans celebrated while Dan “Mulder” Petrescu looked worried.  Dinamo fell back to type and were panicking.  Torpedo were rampant and then it happened again.  More flares, again from the new recruits to the Torpedo ranks.  The match was stopped and the cameras (previously avoiding much of the stupidity in that section) drew in on what they were doing.  Fires were burning in the stands and seats were now ripped out and being thrown at police and officials.  This was a full fledged riot.

The OMON encircled the area and we waited for a reaction, it came in the form of more flares and fireworks.  The officials called the match off and we were denied a proper finish to a match which had become a real contest.  Where we’d been sitting the week before was cleared and supporters who’d been there had suffered injuries from thrown objects.  I called my friends to see what was happening and they told me they’d already left the ground, that the streets were flanked by police, army and OMON, nobody dared to blink.  Everybody was disappointed and only the most idiotic were claiming this as anything other than an offence to sport.  Who would bring their children to a match now?  We can easily remember the terror on children’s faces at Lansdowne Road when Ireland were taking England apart in 1995, we now have images not dissimilar on Russian TV and media today.

Last evening some media liberals claimed the police were heavy-handed, that is manifestation of dissatisfaction with the rulers in the Kremlin, that it shows how young people are without hope and best of all that the idiots throwing shapes outside the ground can be linked to the attention-seekers arrested for miming in a church in March this year.  What these talking heads fail to realise is that there are two reasons that can honestly be offered.  1.  Earlier there was an organised “faction fight” between the two groups in a patch of wasteland which goes back in Russian history (normally in Winter) and a public display was needed by these idiots who needed maps to find the stadium.  2.  Pack mentality is terrible and anyone with a brain can be caught up in it.  There is nothing economic in this, nothing social, nothing to do with football (the same happens before bandy matches) and nothing to do with anger towards VV Putin and his mob.  This is about groups of idiots who decided to grab some attention and mimic “hoolie” actions they figure is part of football culture.

This morning over coffee we discussed what had happened.  My friends told me that the attitude of the police was one of shock.  Most of the young recruits were terrified, they said, and only for the OMON there could have been serious injuries.  They enjoyed the camaraderie with the Torpedo supporters and they were embarrassed by being associated with any kind of violence.  It’s nothing new in Russia, much has to be done to improve matchday operations for most sides, especially with big crowds, and for the National team.  President of the RFS Tolstykh has made it clear he wants a family friendly game that is affordable and accessible like Germany.  He must know that before Germany came into the light in the mid/late-90’s it too had to clear out a problem before the sport fully re-engaged at club level with the community.  There were 20 arrests last night and no serious injuries, yet the match looks almost certain to remain as a win for Dinamo – despite only 51 minutes being played.  The losers will be the supporters and sport of football, not the “fans” who threw shapes and fireworks.  This happens in the week when the RFS began a sincere and severe stand against bad behaviour from clubs and individuals.  The following might be amusing for non-Russians, but for the game here it’s a major step forward.

The major steps aimed at ensuring clubs improve their security and stadium safety, while cutting out improper behaviour has had a solid start under the new President.  On Wednesday afternoon the football media were (for a change) giving praise to the RFS for actions taken and a real step made towards making football the people’s game.  A few short hours later and it was left to the idiots to drag the game back to the headlines for the reasons the liberal talking heads love.  Football has a long, long way to go before it is fit for purpose in Russia, it’s all eyes on the clubs to see if being hit in the pocket will make the difference.  We all can hope.

One thought on “War dancing in the streets – and stadium”