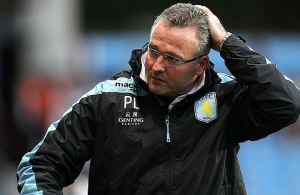 If Aston Villa are to escape relegation – and on Saturday’s evidence, they should – then bringing some of their away form to Villa Park will be key.

Lambert’s approach this season has been more suited to away days. Villa sit deep and look to hit opponents on the break with the pace of Benteke, Agbonlahor and Weimann. It’s a tactic not without success – the weekend’s point at Anfield was their 16th gained from away trips this season.

But, while it’s an approach that fans accept more easily on their travels, it doesn’t achieve the same levels of acceptance at home. And Villa do struggle at home. The pressure from the fans to attack seems to go against the manager’s inclination and his young side often fail to fire. The result – a paltry 8 points from a possible 33.

However, Saturday’s performance – and indeed the second half against Arsenal last Monday at Villa Park  – suggest that if the Scot can encourage his side to go after opponents and engage them higher up the field, then Villa could move comfortably into mid table.

After a passive 45 mins against the Gunners last week, Villa found themselves 2-0 down. A change of tack from the manager at half time saw Villa transformed. Rather than sitting off Arsenal, Villa stepped up – pressuring their opponents higher up the pitch and giving them a much more uncomfortable second period.

On Saturday, Lambert seemed to have been emboldened by what he saw and took that more aggressive approach to Anfield. Again, the high pressing, high energy game was in evidence, catching a sloppy, open Liverpool on the hop. Villa more or less exploited every Liverpool weakness and were not flattered by their two goal lead as they entered first half injury time.

For all the plaudits Brendan Rodgers has taken this season, Lambert won the tactical battle easily. Rodgers had talked this week about his side still being in title contention – but stressed they must remain focused. Ironically, his unbalanced selection suggested it was he who had taken his eye off the ball. In an effort to accommodate the returning Sturridge, as well as Coutinho and Sterling, in support of Suarez, Liverpool’s formation resembled an extremely open 4-2-4, suggesting the Northern Irishman underestimated the Villa threat.

Villa’s compact midfield three easily out ran and out fought Gerrard and Henderson – and provided ample support the front three who had the Reds defence tied up in knots for much of the first period. Such was Villa’s dominance that Rodgers was forced into a number of tactical changes to stem the flow.

Lambert should take much satisfaction from that fact. And despite seeing Liverpool claw their way back to parity, he should also be pleased with how his side didn’t buckle, maintained their intensity and finished on the front foot. He’ll also take heart from the return to form of Benteke, surely Villa’s most important weapon in the fight to stay clear of the relegation dog fight.

If Lambert can coax similar displays from his players at Villa Park, then they should ease their way to safety.