At some point, probably during the early 1960s, the nasty side of football was born and promptly garrotted its parents with the chain of its first birthday bike. And while we may not see much traditional hooliganism in the football of 2014, the hate lives proud and strong in the songs sung in stadiums across the country, making life tricky for anyone who thinks the term ‘meathead’ is not a compliment.

Most of us are too young to remember going to watch a local team one week, then their geographic rival the following week – whoever was playing at home nearby, just for the love of the sport. My great-grandfather did this, as did (I don’t know why I know this) Bruce Forsyth.

Many of us are also too young to have had direct involvement in the violence of the ’70s and ’80s, large-scale, organised carnage with ‘firms’ disfiguring each other for fun, with football as afterthought. Clearly between these two versions of football history there was a schism of which we’re still reaping the benefits.

In the fumigated version of the sport we watch today, almost all of our football violence is heard but not seen. And believe me, it’s heard. I can’t be alone among fans unsure of their own position in the stands as angry, hate-filled morons scream the most sickening abuse they can think of at a group of equally frenzied individuals down the other end. 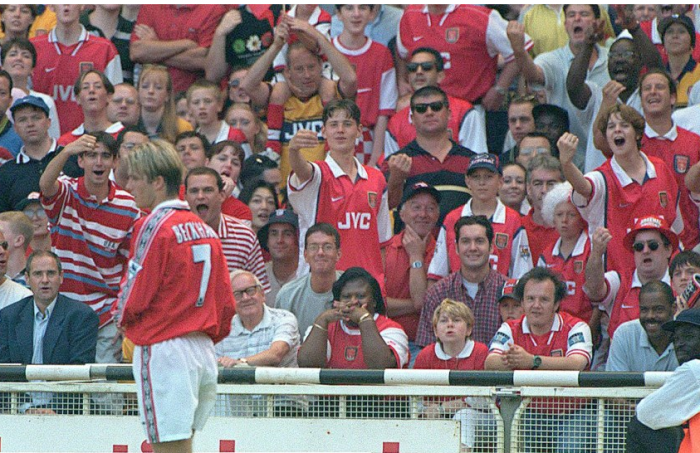 I have a season ticket at a Premier League football team’s ground and go to all but a couple of games a season. In the last couple of years I have sat (stood, in reality) in the club’s supposed ‘singing section’, among men who have elected to loudly sing songs on:

There have been others, plus of course the simulated hissing of gas ovens.

The vast majority of football fans I know, regardless of team, are decent, sane people in most aspects of their lives. Their interests vary and their politics differ, but all know that racism is unacceptable and most, approaching all, know that homophobia has no place in modern life. I live in a small flat, work in offices, go on the odd holiday and don’t tend to scare children if I can help it. I’m a fairly normal person and most people I know are too.

How, I ask you, are right-thinking people meant to react when we hear songs like this? I’m no wallflower, and I can’t deny that my impressive beer intake before every match often prevents me remembering not to sing ‘Tim Sherwood’s mother is a whore’ at the end of a particular song. Nevertheless, I can safely say all of Ireland’s Guinness couldn’t make me sing a song wishing an opposition player had been shot. Not even Teddy Sheringham.

I’m one of the people in this particular stadium who has, though Christ knows how, ended up having to start songs when no-one else can be arsed. As a result, when I hear this type of disgusting song starting up from the western section of our particular corner of the ground, I have little choice but to start a different song, as loud as possible, in support of the team we’ve actually all paid to see.

And as that happens I can feel the hatred of the people keen to wish death on others turning on me for daring to support my team, rather than commit racist and homophobic crimes for which you would quite obviously be arrested on the street. Many of my own fellow fans are wishing me bodily harm for stopping them singing songs their mothers would spank them for. I’m the villain. It’s really come to this?

These people almost certainly view it as ‘banter’ and a way to let off steam of a weekend. A thought: if you have so much suppressed anger in your life that you need to express the most appalling sentiments imaginable when the valve is opened, should you not consider making certain changes in your life? New job, perhaps? Join a boxing club? Spot of gardening?

I’d never claim to be blameless – sometimes the atmosphere is so non-existent the only way to get anyone going is to sing something angry. But surely this doesn’t have to be the case. I suggest a middle ground, where we can continue to mock the opposition, but with humour not hate.

Take our friend Mr Adebayor. While some may pine for the day he was nearly shot to death in northern Angola, others choose to find elaborate ways to bastardise his usual song, for example: ‘Adebayor, Adebayooooor, you used to play on Sky Sports, now it’s ITV4’. And let’s be honest, even Manchester United fans can see the funny side of “Did she take her teeth out first?

Players are often claiming the support of their fans gives them a big boost but the backing would surely be stronger if we could dump the anger (and obviously the homophobia and, in my team’s case, especially this bloody ‘Yid’ business), and replace it with positivity, or at least a few laughs. If anger at football continues to grow as some worthless substitute for physical violence, we’re only going to end up turning on each other.

It’s time we got behind our teams and stopped obsessing about the opposition, or worse. I don’t much want to go back to the golden days of watching my team and their rivals, but please don’t make me give up both.