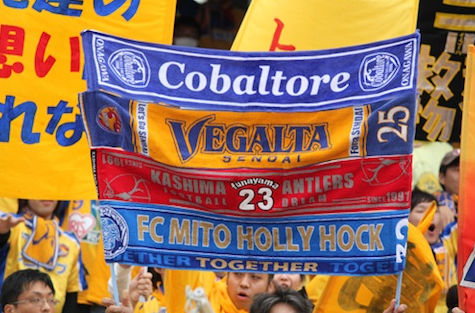 Sometimes sport has the ability to transcend the old saying “It’s just a game” and act as a crutch for a community or nation during periods of trouble or after a tragic loss. New Zealand showed this by winning an emotional Rugby World Cup Final in 2011 or in our own sport, with Zambia winning the African Cup of Nations earlier this year, in the same city that had claimed the lives of its golden generation of footballers 19 years earlier.

The same effect has been witnessed in the city of Sendai in Northern Japan, which was hit by the deadly Tsunami triggered by the magnitude 9.0 Tohoku Earthquake last March. It is hard to forget the images that flashed up on 24 hour news channels that day and the ferocity of the water that swept aside houses, cars and alike. It is almost a year since this devastating natural disaster hit Japan but the power of football, especially in Sendai, has helped to some extent to repair the damage and destruction caused 12 months ago.

Vegalta Sendai FC have only on rare occasions touched the lofty heights of Japan’s top division but having successfully navigated their way through their first season back in the J1 since 2003, were looking once more to stave off relegation and compete with the big boys of Japanese football. The deadly events of 11th March 2011 soon focused everyone’s attention onto much more important matters.  Such was the effect of the earthquake and tsunami that there were calls for the 2011 J1-League to be cancelled completely. As the impact of the events began to sink in, the start of the season was pushed back six weeks to April 23rd, allowing for towns and cities to grieve and rebuild before returning to normal life.

Vegalta as they are affectionately known by their vociferous support, suddenly took on a much more important role going into the 2011 season, to help restore faith and mend a shattered community literally as well as mentally.Manager Makoto Teguramori brought the squad together to volunteer in the clean-up effort and help the city they represent out of its darkest hour. Through the football team, Teguramori believed that the scars could be healed quicker, the manager stating “It was our job to stand at the front lines of recovery.” The home of Vegalta, the Yurtec Stadium, was utilised as a base for supplies involved in the clean-up and rescue efforts but unfortunately, the team’s training ground had been completely destroyed and was therefore unusable. The effect on the player’s mental state was substantial, with star player Marquinhos having to head home for Brazil suffering from psychological shock. The rest of the squad stayed, helping to try and rebuild so many of the thousands of lives that had been destroyed in an instant in Sendai.

Training, tactical meetings and fitness sessions that are usually associated with the build-up to a new season were forced to take a back seat and it was only in the final few days before the start of the 2011 season that the players and coaching staff addressed these issues. It was to this back drop that Vegalta Sendai stepped out to face Kawasaki Frontale in the season opener, the Vegalta fans unfurling a large banner that read, “Thank you for all friends. We do not lose until we regain a hometown.” On a day full of emotion, Sendai managed to run out 2-1 winners and Vegalta’s fairytale season was born. The critic’s relegation favourites went on an unbelievable run of form, sitting top of the table midway through the season. Powered by a sense of togetherness, not only within the squad but with the fan base and the city that they were helping to rebuild, the team recorded their highest ever league finish and only failed to challenge for top honours due to an understandable dip in form at the end of an emotionally draining season.

The first anniversary of the disaster is this Sunday and it is perhaps fitting for the city of Sendai that the season opener of the J-League season will be played this Saturday, between two of the areas hardest hit by the tragedy.  Kashima Antlers, another team based on the east coast of Japan are the visitors to Sendai as the entire nation of Japan gears up to pay its respects for those who lost their lives one year ago.

It may well prove to be a long and hard season ahead for Vegalta Sendai. After their heroics of last season, being spurred on by the spirit and passion of the city; it is unlikely they will be able to repeat their stunning feats of last season. The Tokyo Weekender J-League preview warned that if last terms top goal scorer Shingo Akamine is not able to relive his form of the season just gone then the team may be in danger of flirting with the relegation zone rather than the fight for the title. For most supporters however, purely surviving in the J1-League would be a successful season. There is one thing for sure, that is whatever the outcome of Saturday’s game and however Vegalta’s season plays out, the city of Sendai will be forever grateful for the role that its football club has played in getting it back onto its feet.

The grit, determination and triumph of the human spirit in such adversity in not only Sendai but the entire country shows the extent to which football and sport in general can bring such a positive impact to a community. It may be that it is only in such adversity that this becomes clear but it is comforting to know that our sporting and football clubs can provide such leadership and togetherness in trying times. For the city of Sendai, their Vegalta will always be much more than a football club. They will always be a beacon of hope and determination as Sendai City continues to rebuild one year on from the tragic events of 11th March 2011.