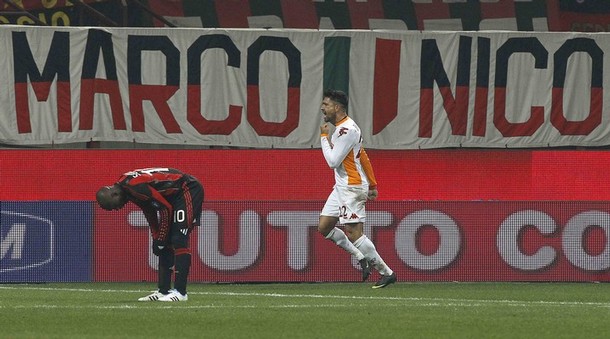 Pausa Invernale – The winter break is upon us, and the first half of the Serie A season has exceeded all expectations. The reigning treble winners, Internazionale, have floundered repeatedly and may find themselves on the verge of losing the Scudetto to their bitter rivals, AC Milan.

AC Milan have been, without question, the most impressive side in the league throughout the first half of the season. Unlikely challenges have been launched by Lazio and Napoli, while regular contenders Juventus and Roma struggle with consistency.

At the other end of the table, Bari look doomed to relegation. A cluster of teams find themselves stuck in the mire of a relegation battle. In fact, even Chievo (currently in 10th), cannot take their Serie A status for granted yet.
Before we distribute end of year awards to the top of the Serie A class, let’s have a quick review of this weekend’s action.

The end, it appears, has come for Rafael Benitez. Although Inter were victorious at the Club World Cup in Abu Dhabi, the Spaniard’s bizarre declaration that he would need three new signings or he would leave the club appear to have been his last transgression. Massimo Moratti is said to be on the verge of sacking Benitez and may now look to former Roma boss, Luciano Spalletti, to take control of the champions. Spalletti is the bookmaker’s favourite for the role, having just completed a title-winning season at Zenit St Petersburg.

AC Milan‘s seemingly relentless charge towards their first Scudetto since 2004 was interrupted by Roma at the San Siro on Saturday night. The Rossoneri were outplayed all evening by the visitors, who handed Adriano only his second start. The bulky striker had been awarded the Bidone d’oro gong for worst player in Serie A just last week but the Brazilian summoned an impressive performance at his old stomping ground.

The real star of the show, however, was Marco Borriello. Borriello, loaned to Roma by Milan at the start of the season, has been the Giallorossi‘s outstanding player in the league to date and found himself on the scoresheet once again. The game’s only goal came in the 70th minute. Jeremy Menez burst down the right wing and drilled a low cross into the six-yard box, the ball deflected into the path of Borriello who stabbed it home.

Milan’s defeat allowed Napoli and Lazio to cut into the gap at the top of the table. Lazio eked out a 3-2 win against a spirited Udinese side, with Christian Zapata’s last minute own-goal providing the three points for the Albiceleste. Lazio took the lead twice, before being pegged back both times by Zebrette. The result brings Lazio to within three points of the leaders heading into the winter break.

After his stoppage time heroics against Steaua Bucharest in midweek, Edinson Cavani once again provided Napoli with a crucial win, this time against Lecce. In a finale that has to be seen to be believed, Lecce were denied a winner when a last-ditch sliding block was made by Gianluca Grava. The ball was eventually worked up the field to El Matador, 35 yards from goal. The Uruguayan dribbled past three tacklers before smashing a powerful drive into the top corner from 25 yards.

In a Serie A year not short on magnificent goals, this one stands out for its timing and what it could mean for the Partenopei come the end of the season.

An almost equally spectacular goal was bagged by Fabio Quagliarella as Juventus were hosted by Chievo. The former Palermo and Napoli forward, often described (quite accurately) as never having scored a boring goal, fired an outrageous overhead kick home to give the Bianconeri the lead in Verona.

Juventus ended up drawing the match but will secretly be relatively happy with the point earned. The result could have been a lot worse for Juventus –  Marco Storari was forced to save an early penalty, while 19-year old Manuel Giadonato was sent off before Sergio Pellisier bagged the equaliser in stoppage time. The result leaves la vecchia Signora two points behind Napoli and Lazio in fourth place but sees them poised to mount a strong title charge in the new year. 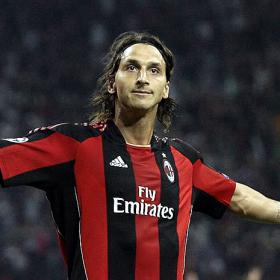 Player of the Season so far: Zlatan Ibrahimovic (AC Milan) – Critics in Italy have raved about Ibra. The Swede has scored nine goals in 16 games for the table-topping Rossoneri, but has also been the provider for a remarkable seven assists. His season to date has drawn him comparisons to the great Marco Van Basten from Arrigo Saachi. High praise indeed.

Young Player of the Season so far: Javier Pastore (Palermo) – The Argentine midfielder revealed himself to be the sensation that many observers believed he could be this season. El Flaco has scored an impressive seven goals, has demonstrated an astonishing grace in control of the football and has shown a passing variety that has attracted the attention of FC Barcelona.

Goal of the Season so far: Edinson Cavani v Lecce – What a strike this was, and just in time to win this award too.

Team of the Season so far: