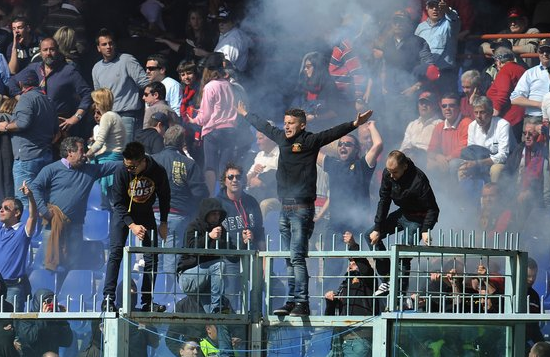 Genoa’s Serie A match against Siena was halted temporarily after disgruntled Grifoni supporters expressed their frustrations at the team’s players for a below-par performance.

After 53 minutes of play Alberto Malesani’s team were 4-0 down against Giuseppe Sannino’s Siena. A result that could have left them in the relegation zone had Lazio not been beating Lecce at the time. Immediately after the fourth goal objects, including flares, were thrown onto the pitch by disgruntled fans.

The club’s ultras then took action by blocking the entrance to the dressing room as they wanted the players to hand their jerseys over on the grounds that they were not “worthy” of the colours.

The Siena players were given a standing ovation and were allowed to leave the pitch, as were the officials, leaving the Genoa players stranded in the centre.

Giuseppe Sculli was the only player to refuse to take off his jersey and instead confronted several ultras, while wing-back Giandomenico Mesto broke down in tears. Captain Marco Rossi, who was given the responsibility of taking the jerseys and passing them on to the ultras, proceeded to go over to the group of supporters in a bid to reason with them.

Sculli then appeared to try to negotiate with his jersey still on, along with Sebastien Frey, who tried to pull his back and was quoted in the Italian media as saying: “This is my shirt, we are all for Genoa.”

From watching events unfold live it became clear that Sculli was setting up a meeting with the ultras at another time to discuss a solution. The Siena players eventually returned along with the officials.

Play finally resumed after a 40-minute delay, with the Bianconeri eventually winning 4-1. However, it is expected that a round of talks between the Genoa players and ultras will commence at the club’s training complex on Monday.

However scenes such as these are not uncommon in Italian football. Ultras have stopped many games down the years and are known to intimate players if results aren’t going well. The Rome derby was famously called-off half way through the game in 2004. Two minutes into the second half smoke rained down from the terraces and the referee Roberto Rosetti was forced to stop the game.

Francesco Totti was called over by the ultras and told they wanted the game stopped because of the death of a child before the game. The child, a Roma fan, was allegedly run over by a police car. The rumours turned out to be false, and no such child was run over. The stadium announcer attempted to communicate this message to the Roma and Lazio ultras on several occasions, but they didn’t believe him.

The Roma play-maker famously shouted at Coach Fabio Capello: “Se giochiamo addesso, questi ci ammazzono” (if we play now, these (ultras) will kill us). Both sets of players refused to continue the game, and Rosetti was forced to abandon the game, but only after a brief conversation with the then Lega President Adriano Galliani over the phone.

Former Inter player Samuel Eto’o admitted he couldn’t bring his children to watch him play any more following racist chanting directed at him during games. In 2010, when Inter faced Cagliari at the Stadio Sant’Elia, chants from Rossoblu ultras became so intense that officiating police inspector, Giuseppe Gargiulo, immediately ordered referee Paolo Tagliavento to suspend the match. The stadium announcer warned the ultras several times, but they persisted. That was the first time a game was stopped in Italy for chanting.

Even more remarkably, when former Inter player Mario Balotelli — an Italian of Ghanaian descent — complained about the level of abuse he received, the Italian Football Association fined him.

Serie A is infamous for its end of season ‘fixed’ results, and it’s commonly accepted that ultras are behind it all. One team that have nothing to play for will ‘allow’ another side fighting for relegation to thrash them. The odds of such an event occurring are very high, and suddenly bookmakers are flooded with bets on it happening. The ultras will bribe the players to make mistakes that cost their team so they can profit from knowing the result.

Last season Andrea Masiello confessed to being involved in match-fixing. The scandal revolves around Bari’s derby game against Lecce in which Masiello admits to have pocketed 300,000 euro by scoring an own goal to guarantee relegation. Masiello claimed a ‘mafia’, who have since been linked to the ultras of the club, cornered him and forcefully offered him the money in exchange for ‘bad performances’.

Italian football ultras have changed dramatically in the past twenty years. There was a time when supporters travelled side-by-side to derbies without crowd problems of any kind. The ultras were just die hard supporters, not supporters willing to murder.

They have become parasites that feed of the club, and many don’t even pay for tickets.  They have far too much power, and in many cases can get access to the Coach and players to threaten them.

The Italian Football Federation (FIGC) must take action against these people who are terrorising calcio. It was very clear on television who the Genoa ‘ringleaders’ were, and they should be investigated by the police and duly punished.  All fans that constantly support the team and pay high prices to go to games deserve to express their opinion on the team. However nobody has the right to put the players’ lives in danger at any time because of their performances on the pitch.