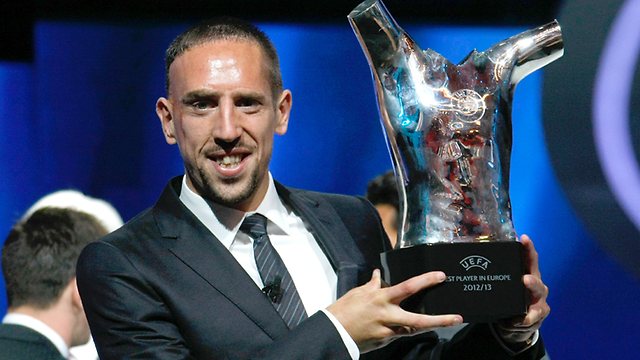 Yet again, the Champions League draw was delayed by needless discretions.

Yet again, famous ex-footballers struggled with the swivel of the Champions League pods.

And, yet again, it seemed that a name from Barcelona or Real Madrid would waltz off with UEFA recognition from 53 sports journalists for being the best player in Europe.

Only, that was not how it turned out and, in truth, Franck Ribéry’s award should not have come as too much of a surprise.

This was far from a novelty vote, with Ribéry’s first major individual award coming at 30 years of age and the Frenchman’s facial scars marking him out in comparison to the slicked, coiffed Lionel Messi and Cristiano Ronaldo.

Rather, Ribéry’s team, Bayern Munich, won the 2013 Champions League and Ribéry’s 11 goals and 18 assists in 42 games were crucial to Bayern’s unprecedented treble.

Messi and Ronaldo, on the other hand, may have scored a combined 117 goals but had just a La Liga title between them in 2012-2013.

In tandem with his, and Bayern’s, ground-breaking success, the past season was Ribéry’s most stable and selfless.

In short, the 30-year-old turned his life around after the horrors of the Krysna Mutiny – where he, cynically,  appeared on Telefoot only days earlier with Raymond Domenech to denounce any squad disharmony – and falling out of favour with Louis van Gaal in 2009-2010.

Then there were the small matters of his constant pining to join Real Madrid, his marriage nearly breaking down – owed to the revelations of Zahia Dahar, an underage prostitute – and a series of injury setbacks in 2010-2011.

Yet, Ribéry finally realised much of his potential under Jupp Heynckes between 2011 and 2013.

Sure, the Frenchman was never going to live up to the £80 million fee that Bayern’s president, Uli Hoeneß, optimistically believed Ribéry was worth after Ronaldo’s departure to Real Madrid in 2009.

However, Heynckes coaxed something out of Ribéry that Messi or Ronaldo do not have: defensive ability.

The Frenchman’s tracking back, harrying and fitness were crucial to Heynckes’ foundations and will prove just as valuable under a high-pressing manager like Pep Guardiola.

In truth, it has been a journey that has been two years in the making with Ribéry being allowed more creative freedom, compared to what he had under van Gaal, yet, somewhat ironically, beginning to track back in subconscious gratitude to Heynckes.

After all, Ribéry found his rhythm in Heynckes’ 4-2-3-1 formation, which saw Ribéry cut inside from the left flank to devastating effect and combine brilliantly with Phillip Lahm on the left and through the middle with the trequartista of either Toni Kroos or Thomas Müller.

While Ribéry’s punch on Arjen Robben in the bowels of the Allianz Arena at half-time of the 2-1 Champions League first-leg victory over Real Madrid on 17 April, 2012 was incredibly regrettable, owed to the trivial matter of who would take a free-kick, this was a rare example of immaturity in recent years.

After all, it was no coincidence that Bayern struggled, psychologically more than anything else, once Ribéry went off after winning a penalty against Chelsea in the Champions League final in extra-time.

In fact, Ribéry may well have taken the said spot-kick that Robben went on to miss and, also, the penalty that Ivica Olić’s failed to score in the shootout.

Euro 2012 – despite France’s, ultimately, disappointing overall tournament – saw Ribéry back to something not far off his international best, too. After all, it was telling that for the first time in many years, Ribéry performed well in a French defeat, in the 2-0 loss to Sweden.

So, for all the criticism Ribéry has received over the years for his lack of a big-game temperament, gone is the over-eagerness and unnecessary tricks; Ribéry’s all-energetic style has meant that his selfless team play has finally resulted in individual recognition.

Perhaps, with the Ballon d’Or on the immediate horizon, Ribéry may yet cement his legacy in becoming the first Frenchman since Zinedine Zidane in 1998 to win the prestigious Golden Ball.