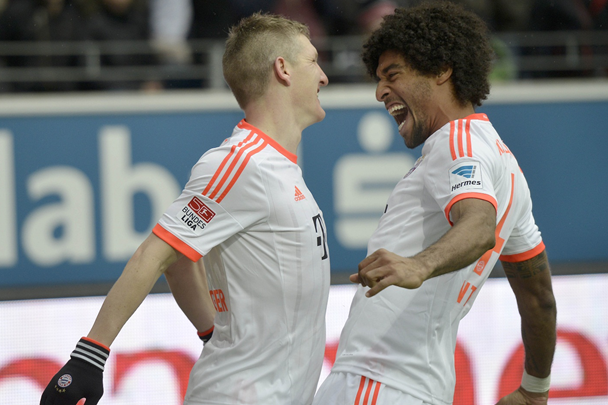 This week sees the mouth-watering Champions League semi-final between Bayern Munich and Barcelona. After six consecutive semi-final appearances, two resulting in trophies, Barcelona have become the team to beat.

But after destroying their previous record for quickest team to win the Bundesliga, Bayern have become the inform team for 2013. The Bavarians are the favourites of many to defeat Barcelona and potentially win the title.

In the past five seasons, the three teams to knock out Barcelona went on to lift the trophy.

Both teams are in great domestic form. With 26 wins from 30 matches Bayern have already won this season’s German league. Barca has an equally impressive 27 wins from 32 matches, and have almost wrapped up this La Liga for the season.

Bayern have been playing good possession football since the days of Louis van Gaal. But it is Barca who have taken possession to the extremes under the tiki-taka philosophy. According to UEFA.com, Barca have an average 68% possession during this seasons Champions League, compared to Bayern’s 57%.

Barca will be expected to hold greater possession during the match, so Munich will need to make the most of the ball when they get hold of it. UEFA.com reports Munich’s goal attempts at 167, with 90 on target, to Barca’s 156 with 90 on target. Bayern have scored 22 goals, two more than Barca. And in general, the Bavarians are more direct with their possession.

Both teams will need to be at their best defensively. Bayern may have let in more goals during this season’s tournament, 14 to Barca’s 10, but they have still won more matches. This means, they may let in goals, but manage to score enough to win the match.

Since Van Gaal’s early days in Munich, the German club have used their wingers Robben and Ribery to inflict damage on their opponents. Recent seasons have seen Muller and Shaqiri also employed as wide men.

Barcelona’s wide defenders Jordi Alba and Danny Alves are well known for their forward runs and attacking ability. The Bavarian’s may be able to take advantage of this and get behind Barca’s defence using their wingers.

Bayern also has a greater squad depth then Barcelona, who struggle when key players are missing from the starting eleven. The Catalonian’s are able to use Mascherano as a central defender or defensive midfielder, and Thiago, Alexis Sanchez and Cesc Fabregas are able to fill in for any players missing from the first team.

But the Bavarian have a much larger and deadlier selection of substitutes. The likes of Shaqiri, Pizarro, Gustavo, Gomez, and Tymoshchuk are able to come on and help score goals, while Van Buyten, Dante, Boateng and Contento can come on to help the Bayern defence.

Any injuries or sending-offs will therefore hurt Barcelona much more than Bayern. Which brings us to the big question, will Messi be fit for that match? Initial reports suggest Messi will play. But will he play the full 90 minutes of both matches, and will he be at his physical best?

Messi’s absence from the starting line-up only enhances the Catalonian’s lack of depth. Barca are very dependent on their miniature magician. The Argentine has scored eight of Barcelona’s Champions League goals this season, the next highest scorer is defender Jordi Alba with two goals.

Bayern Munich’s top scorer, on the other hand, is Muller with five, followed by Pizarro with four and Tony Kroos with three. Unlike Barcelona, Munich is much less dependent on any one player. Without Messi Barcelona are much less dangerous, but take out any one player from Bayern’s eleven, and they have someone else ready to fill in.

But if Messi does play, how will Bayern attempt to stop him? Some teams have man-marked Messi, but this didn’t really work. Other teams have tried to double-mark him, which didn’t work either. AC Milan tried to block Messi out with a ‘cage’ of players encircling him when he got the ball.

No system has worked all of the time against the four time Ballons d’Or winner. Bayern’s manager Jupp Heynckes will undoubtedly have a new plan to stop Messi. But the only way to find out what is it, and if it will work, is to tune into the Champions League this week and watch the action unfold.