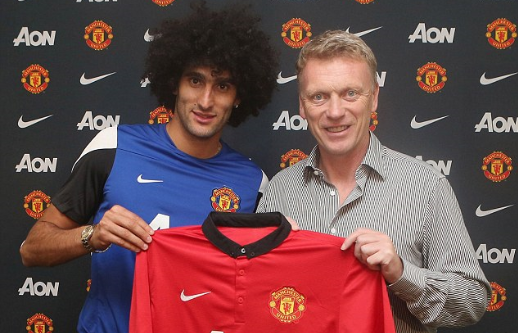 The task of replacing the most successful manager of a generation was always going to be a poisoned chalice but David Moyes’ start at Manchester United has been hampered by shambolic transfer dealings that have left the club embarrassed and, more importantly, the squad seriously lacking quality. Much of the criticism has been aimed at Moyes who has looked naïve during the transfer window, yet the biggest scapegoat has been the new chief executive Ed Woodward, (with good reason), though the real reason United have struggled to replenish their squad is the lack of funds offered by the Glazer family.

Whilst it is certain that both Moyes and Woodward have been culpable of many errors during the summer, it is hard for any club that is expected to splash the cash when the club is not in a habit of doing so. Since their takeover, the Glazers have plummeted the club into debt so consequently have to run the club in a way that does not increase this debt. This is of stark contrast to the clubs that have apparently bottomless pits of money supplied to them by their owners, (Chelsea, Manchester City, Monaco, PSG) or clubs who despite being in debt, don’t mind spending, (Real Madrid).

Stories continue of United being ranked as one of the richest clubs in the world and of signing record breaking sponsorship deals, and this gives, understandably, the impression that United have money to spend. Even if they did not, it was clear that, without Sir Alex Ferguson, they could do with some funds for a marquee signing. Even Arsene Wenger, for so long derided for not spending, forked out over £40 million for Mesut Ozil in recognition of the need for a star player.

United have bought players for a lot of money, but not in comparison to the other elite clubs of Europe, and they have always sought to balance the books. Buying young players, such as David de Gea and Phil Jones, is a deliberate policy possibly because they want to mould a player in the United style, but more likely because they know that the fully-polished, proven player would be even more expensive. On the rare occasion that United broke this policy, with Robin Van Perise, they did so at a reduced rate. Comparing the high prices for players like Ozil, suggests that Van Persie was a bargain at £27 million and he did not come for money but instead because of the ‘little boy inside of him’. United have been put-off by high prices, shown by trying to buy Marouane Fellaini for lower than his release clause. One argument could be that with spiralling prices, there is no value, and they do not want to make a mistake such as the record £30 million signing of Dimitar Berbatov in 2008 who was a relative flop, but the key reason for how United function in the market is down to the Glazer’s enthusiasm to save rather than spend.

A brief survey of the four seasons between Cristiano Ronaldo’s transfer to Real Madrid up to the start of this transfer window proves the keenness for United to balance their books. In the 2009/10 season United spent £24 million on players, mostly Antonio Valencia, and received £91 million, mostly Cristiano Ronaldo. In 2010/11, their biggest signing financially was the bizarre purchase of Bebe for £7 million and he was joined by others including Javier Hernandez to reach a total of £25 million spent, compared with £15 million received. In 2011/12, United spent much more with De Gea, Jones and Ashley Youngs’ purchases reaching £50 million with £12 million being sold. In 2012/13, £67 million was spent on Van Persie, Shinji Kagawa and Wilfried Zaha amongst others, whilst £13 million was recouped. Overall, in those four seasons, United have spent a net total of £32,100,000.

A club the size of United, who sell billions of merchandise and make millions on ticket sales, should expect to be in the red for transfer dealings, but this is a miniscule amount of expenditure on transfers compared to their rivals. In that same period, Manchester City have made a net spend of £298 million and Chelsea have spent £260 million. European rivals follow the same pattern with even Barcelona, famed for using their own, youth players, spending £135 million and recently adding Neymar to their ranks. In that same period, Sunderland have spent more than United (£33,200,000) though some of that was on old United players like John O’Shea and Wes Brown!

There could be an argument that the figures are distorted by the £80 million fee received for Cristiano Ronaldo but look how United spent the money compared to other teams who have sold big. United bought in his stead, Valencia, Obertan and Michael Owen on a free. Tottenham Hotspur have just sold Gareth Bale for more than Ronaldo (despite him not winning the Ballon d’Or or scoring over 30 goals a season) and have spent that amount immediately on players such as Erik Lamela, Roberto Soldardo and Paulinho. When Liverpool sold Fernando Torres for £50 million to Chelsea, they replaced him instantly with Andy Carroll and Luis Suarez.

The role of the previous chief executive, David Gill, has been underestimated and his conduct with transfers was even better considering the financial limits placed on him. The ability of Ferguson to still craft winning sides despite not spending tonnes was even more impressive.

It is hard not to feel sorry for David Moyes. For so long on the end of ‘insulting’ and ‘derisory’ bids for Everton players, such as City’s pursuit of Joleon Lescott, he was lost representing the champions. He correctly identified the midfield as the area to improve but rested all his hopes on Cesc Fabregas, who clearly did not have a little boy inside of him telling him to leave Barcelona. He was then indecisive about who his midfielder should be, failing to snap up Thiago Alcantara (before his pursuit of Fabregas) and then pondering who else he would try. Rumours of Luca Modric, Daniele De Rossi and Sami Khedira did not surface, whilst Ander Herrera was identified too late. Other midfielders, such as Kevin Strootman or Ozil, were allowed to join new clubs without a fight.

Where Moyes did falter was his pursuit of his old players. He wanted Leighton Baines, even though Patrice Evra is one of United’s better players, and Fellaini but approached them seemingly in a way that he wouldn’t have been impressed with if still in charge of Everton himself. He also did not attempt to use his scouting networks to find the bargains that United have often found in the Glazer regime, possibly worrying that for every Hernandez there could be a Bebe.

Another lack of shrewdness was the failure to use current players as exchanges. There is a lot of deadwood at United that should have been sold but have remained as no replacements were bought. Surely a player could have been swapped for Nani, Young or Anderson? If Wayne Rooney really wanted to go, why not swap him for Juan Mata or Jack Wilshere or Bastian Schweinsteiger? If rejected, at least that club wouldn’t pester Moyes for Rooney anymore.

Ed Woodward knows how to sign a sponsor but seemed clueless on how to sign a player. His inability to understand release clauses suggested the actions of an amateur in this field. From leaving things shockingly too late for Herrara, to his illogical bids for the Everton pair, he brought embarrassment to the club, especially as his tactic of voicing clearly his attempts to purchase players backfired. This was completely opposite to Gill’s secretive dealings. Paying significantly more for Fellaini than his actual release clause would have been was all that he deserved for trying to do deals on the cheap.

However badly the pair have dealt with transfers this summer, some sympathy should be given considering the lack of funds at their disposal compared to their rivals. David Moyes cannot help not having the gravitas that Jose Mourinho, for example, has in attracting players and that is something that the board decided to ignore when choosing Moyes, but even the ‘Special One’ might struggle at a side that didn’t have unlimited funds.