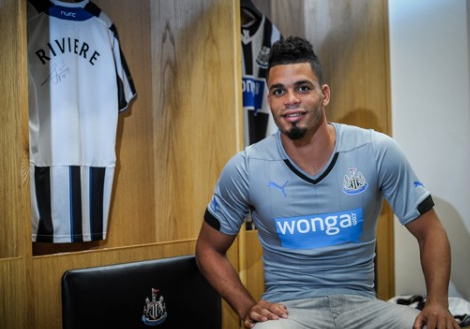 Every summer, the internet is set ablaze with speculation, rumours and counter-rumours of potential transfers once the window opens in July. Of course, with all the ‘on the verge’ and ‘set to’ headlines, the only stories that truly matter are the completed transfers.

This summer has been no different in ushering in another breed of exciting young Europeans that will surely help keep the drama of the Premier League alive. Despite having only been officially open for a couple of weeks, some Premier League clubs have wasted no time in getting ahead of their rivals as manager’s study scouting reports from every corner of Europe before setting about strengthening the squad.

Alan Pardew is eager to improve on last season’s 10th placed finish and has signalled his intentions of furthering the French revolution on Tyneside with the double acquisition of Remy Cabella from Montpellier and Emmanuel Riviere from Monaco. Cabella had been a top target for Newcastle for a long time, and a glance at videos of him can explain why. Quick and creative with a penchant for the spectacular, the 24-year-old was instrumental in Montpellier’s historic Ligue 1 triumph in 2012.

The following season, when the French club dined at the high table of European football in the Champions League, Cabella caught the eye in the group stages with his pace, dynamism and accuracy from dead-ball situations. Cabella showed he was comfortable in on the grandest of stages and his continued growth in France’s top-tier has only helped attract further interest from England. Deployed primarily as a central attacking midfielder, Cabella’s pace and technical ability means he can be deadly from wide positions as well. He is the natural replacement for Yohan Cabaye, who was sold to PSG in January, and his quality and attitude will help him in filling the creative vacuum left by his compatriot.

Cabella is likely to be creating chances for fellow Ligue 1 recruit, Emmanuel Riviere, who has also signed for Newcastle from Monaco. The 24-year-old had also sparked interest from Arsenal, but his dream of playing Premier League football has been fulfilled by Alan Pardew. Following loanee Loic Remy’s return to QPR, Riviere will have the hopes of the religious Tyneside army pinned on him to provide the goals.

Riviere is raw and can be inconsistent, which would suggest that he may not have a career-defining season for a couple of years but he thrives on the drug that every striker craves; confidence. When Riviere has a spring in his step, he can be a nightmare for the most resolute of defences. He is likely to excite and frustrate this season, but still represents another bright prospect aiming to light up the Premier League.

From Tyneside to Merseyside where Liverpool have been busy capturing the signatures of two very promising young talents. Brendan Rodgers was eager to conduct early business for Emre Can after a series of impressive performances in the Bundesliga with Bayer Leverkusen, with some even comparing the 20-year-old to exalted compatriots Bastian Schweinsteiger and Michael Ballack. Living up to such comparisons will be undoubtedly difficult but the youngster appears to have all the ability Liverpool need to strengthen the heart of their midfield.

A box-to-box midfielder with an eye for a tackle, Can is also comfortable and calm with the ball at his feet, meaning he can bring a number of different dimensions to Liverpool’s midfield. With Sterling, Sturridge, Lambert, Lallana and, now Lazar Markovic filling the attacking duties, Can has been seized most likely for his defensive capacities. As well as shielding the defence in a holding role, Can can also be deployed in the heart of defence or on either side as a full-back. His versatility will help him establish a regular starting berth in an increasingly impressive Liverpool line-up.

Joining him at Anfield is the aforementioned Lazar Markovic, who completed his £20m move from Benfica this week. A scintillating winger with the potential to become truly world-class, Markovic will add to the electrifying pace of Sterling on the wing, making Liverpool a genuine force on the counter-attack. Having won a league title in each of his first four seasons as a professional, Markovic also caught the eye last season in the Europa League with Benfica as they finished runners-up.

Markovic figured prominently in Jorge Jesus’ team’s impressive run, exhausting the defences of Tottenham Hotspur and Juventus along the way with his exhilarating acceleration and skill. Markovic is likely to fit in well with Liverpool’s band of talented youngsters and is poised to make Chelsea lament at the fact they failed to lure him to Stamford Bridge three years ago.

Finishing off this first post is Graziano Pellé, a welcome addition to a rapidly disintegrating Southampton team. Bought by new boss Ronald Koeman for around £8m, the Italian striker is experienced at 29 but has every ounce of ability to help him adapt to the demanding culture of top-flight English football. He and Koeman formed a productive employer-employee partnership for two years in the Eredivise at Feyenoord, as Pellé bagged 50 goals in 57 appearances- becoming the most prolific Italian export in European football, surpassing Christian Vieri, in the process- and the Saints will be hoping he continues his rich vein of form as they hope for an ample replacement for Rickie Lambert.

Pellé has everything to make Southampton forget their previous Italian forward- the tempestuous Pablo Osvaldo, widely regarded as one of last season’s major flops- with clinical finishing, smart movement and a natural predatory instinct that puts him in the right place at the right time. He has garnered praise from Louis Van Gaal and Frank De Boer among others for his direct and effective style of play in the Dutch league. Southampton fans will be hoping he lives up to his billing as they mend their broken hearts from the recent exodus of talent from St. Mary’s.