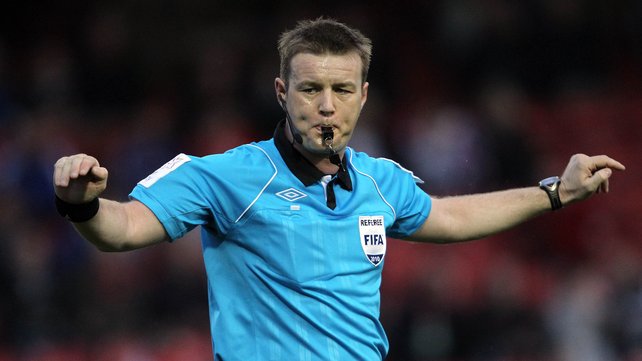 Following more than 350 matches and 14 years as a League of Ireland referee, Alan Kelly has decided to bring his whistling skills to Major League Soccer in the United States.

Kelly took up refereeing in 1994 and joined the Cork Branch of the Irish Soccer Referees Society (ISRS). He refereed in local leagues including the Munster Senior League.

He joined the League of Ireland Referees Panel in 1999 while participating in the first FAI Referee’s School of Excellence.

In 2000 he was selected to referee the League of Ireland Cup Final between Derry City and Limerick City which was the first of four senior domestic Cup finals he refereed.

He refereed his first FAI Cup Final in 2003 when Longford Town beat St Patricks Athletic at Lansdowne Road and became one of only a handful of Irish referees to referee multiple FAI Cup Finals when he took charge of the game between Sporting Fingal and Sligo Rovers in 2009 at Tallaght Stadium.

The 38 year-old has been rising up the UEFA and FIFA ranks for many years now and has been on FIFA’s list of official referees since 2002.

In recent years Kelly has refereed Europa League games, Champions League group stage matches and some international qualifiers for both the World Cup and European Championships, as well as weekly League of Ireland ties.

According to the Irish Daily Star, the Corkman’s potential income will now increase dramatically. A League of Ireland referee earns €150 per game, while MLS match fees can rise to as high as $1,100 (or €810). He will officiate his final game in Ireland this weekend when Sligo Rovers face Shamrock Rovers in an FAI Cup semi-final.

Whilst working as a referee, Kelly has previously worked as a personal trainer/fitness instructor/gym manager in his native Cork but is likely to focus now on refereeing in a full time capacity.

His grandfather and father were both League of Ireland referees and Kelly has stated in the past that they were both the biggest influences on his career.

Back in 2006, Kelly handed out five red cards in the space of ten minutes to Russian players during an U-21 play-off second-leg between Denmark and the Russians. Kelly states that the spotlight shone on him in the aftermath of that game was “very unpleasant. All of the red cards I awarded were correct though.”

Kelly has stated that the highlights of his career so far are:  “The Champions League games were a major high for me: Cluj v Basel, Leverkusen v Genk, but the Real Madrid game at the Bernabeu will always stand out. It doesn’t really get any bigger than that in terms of club teams. It was a fantastic experience and one that, if I never refereed again, I would look back on for the rest of my life.

“The Spain v Argentina game (back in 2009) is also a career highlight. Coming face-to-face with one of my heroes, Diego Maradona. Even to say that, is something that is surreal.”