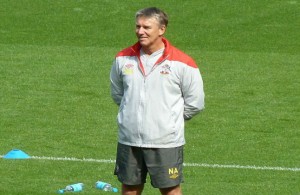 Nigel Adkins took over as Southampton manager back in September 2010 with the club lying 22nd in League One and apparently facing a struggle against relegation for the remainder of that season.

By May 2011, he had guided the club to a second place finish and automatic promotion having secured the most clinch sheets (19) in a season in the club’s history.

Last season he quite remarkably guided The Saints to a second consecutive automatic promotion as they finished in second place in the Championship and Southampton were back in the big time for the first time in seven years.

On Friday, Adkins was sacked with his club sitting in 15th place in the Premier League table, reasonably comfortably above the relegation zone.  Spirits appeared were high at St. Mary’s as the south coast outfit were unbeaten in their last six games and last Wednesday secured a 2-2 draw at Stamford Bridge, having come back from 2-0 down against European champions Chelsea.

Considering those facts, it is quite remarkable that the 47 year-old Adkins has been relieved of his duties.

In most industries, managers get paid more than their subordinates.  This is of course not the case in top flight football where players usually get paid sums which are  multiples of their managers.

In the above mentioned context, maybe the dismissal of Adkins is not such a bizarre occurrence after all.  It is certainly not an isolated occurrence.  Here I will discuss some of football’s other oddest managerial dismissals.  Their replacements have tended not to enjoy great success:

In June 1981 Porterfield was given the task of getting The Blades, newly relegated to the old Fourth Division back into the First Division within five seasons with a long-term contract exceeding that particular time-frame.

Given funds by a new chairman, Reg Brealey, Porterfield strengthened the team and achieved the first step of his mission at the first time of asking by winning the Fourth Division at the end of his first season.  Despite huge financial losses, Brearley continued to provide transfer funds for United’s march toward the top division. However, United were never in the hunt for promotion, finishing 11th in the Third Division.

The following season, the playing staff was cut and promotion was achieved.   However, ground improvement required by promotion to the Second Division meant there was no further funds for new players.  Porterfield’s side was well in the hunt to achieve promotion to the top flight, but the Scot was relieved of his duties with the Bramall Lane outfit just five points outside the promotion spots back in March 1986 and the club eventually finished the season 14 points adrift of promotion.

Walker took charge of Fourth Division Colchester shortly before the start of the 1986-’87 season.

With the club top of the table, Walker was awarded the Manager of the Month Award for October but was relieved of his duties before the award was presented to him.

The club ended up finishing fifth in the table that season and failed to secure promotion through the play-offs.

As Jol took charge of a UEFA Cup match against Getafe at White Hart Lane, news filtered through that the Dutchman was to be replaced immediately after the match by Sevilla coach Juande Ramos.  The Tottenham faithful were not happy about this, they had appreciated the job Jol had done in turning around the mess of Jacques Santini’s short tenure and delivering consistent European football to the Lane.

Only the infamous dodgy lasagne on the last day of the 2005/’06 season stopped Jol from taking Spurs into the Champions League and it wasn’t long before the fine job Jol had done was made clear: by October 2008, Ramos was sacked with Tottenham bottom of the league after picking up, as Harry Redknapp would go on to regularly tell us, just two points from their first eight games of the 2008-’09 Premier League season.

The sacking of Chris Hughton as Newcastle manager shortly before Christmas was quite rightly met with opprobrium by the Toon Army as thousands of fans unfurled banners stating: “All I want for Christmas is Hugh” at St. James Park/the briefly Sports Direct Arena.

Hughton had been left holding the baby after Alan Shearer took Newcastle down in 2009 and not much was expected of him when he began the Magpies’  Championship campaign, but after storming to the second-tier title, Hughton then went on to make a brilliant start to life back in the Premier League.

But being 13th in the table after 16 games wasn’t good enough for Mr. Sports Direct/Mike Ashley, who sacked Hughton and brought in Alan Pardew in his place. And as Hughton’s Norwich look down on Newcastle this season, I bet Hughton allows himself a wry smile.

We all know that, as the football song seems to go these days, Roman Abramovich does what he wants. But even for the impulsive Russian owner, the dismissal of Roberto Di Matteo seemed particularly brutal.

Just six months previously, the Chelsea legend was winning an FA Cup and Champions League double, and you may have thought that winning the trophy that Abramovich craved more than any other would have brought the affable Italian a bit more time in the job. But no: Di Matteo was sacked at 4am following a 3-0 Champions League group stage defeat to Juventus.

Abramovich hardly helped matters by appointing Rafa Benitez, the sworn enemy of the Stamford Bridge crowd who seems incapable of winning a match at home, and that Di Matteo’s name is still chanted vociferously tells you all you need to know.