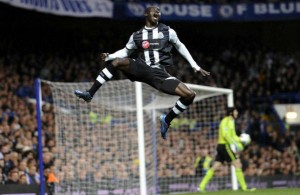 Last weekend saw some spectacular Premier League goals with Aston Villa’s Matthew Lowton on Saturday, QPR’s Loic Remy and Newcastle’s Papiss Cissé on Sunday followed by Sergio Aguerio on Monday, scoring goals which would have been worthy recipients of the award any season.

It got me thinking of my Top Five favourite goals of the season.  Feel free to give your opinion – you might even disagree with me!

Receiving the ball on the edge of the penalty area and with opposition goalkeeper and defender converging on him, 19 year-old Forrester proceeded to scoop the ball up some 20 feet into the air, the lack of a back lift totally hoodwinking the Hoops‘ defence with the ball eventually dropping from its orbit and over the goal line.  Simply stupendous!

Any time the name Ibrahimović is mentioned now, this goal will always be thought of.  The goal would appear higher on this list were it not the fourth goal of a 4-2 friendly win.

It is a remarkable strike however.  England goalkeeper Joel Hart comes out of his penalty area to head the ball clear only for ‘Ibra’ to turn, chase the ball and launch a backwards flying overhead scissor kick from 25 yards out with his feet some 10′ off the ground, looping the ball over the custodian’s head before dropping down over the England goal line.  There can be little doubt that Zlatan’s black belt in taekwondo helped him net this one!

This was a simply wonderful – and highly unusual goal.  It would have been crucial had Wigan not equalised with virtually the last kick of the game.

QPR needed to win the game to maintain their hopes of staying in the Premier League and the French international looked like he had won the game for The Hoops with this sensational strike barely five minutes from time.

A Wigan attack broken down on the edge of the QPR box and Stéphan Mbia proceeded to start the counter attack with a quartet of Latics‘ defenders in hot pursuit.  The Cameroonian sprinted some 60 yards with the ball at his feet, though team mate Remy also kept up the chase.

Eventually Mbia fed the ball into the dashing Remy’s path.  The 26 year-old proceeded to gallop onto the ball before unleashing a first time 20 yard strike into the roof of the net without breaking stride!

It was a goal worthy of winning any game, but alas Wigan proceeded to equalise with a last gasp free-kick and Remy’s sensational strike looks to be for nought as his side are now destined for relegation from the Premier League at the end of the season.

As stated earlier, there were some incredible goals scored last weekend.  In fact, I would find it difficult to think of a weekend where as many great goals have been scored.

Cissé’s was, while a quality strike, also one of the most important of those goals listed here.   Having missed a number of chances during the game against Fulham, the Senegalese international’s head never dropped and he went on to net the precious only goal of the tie deep into injury time at the death of the game.

With the game very nearly over and Newcastle needing a win to put some breathing space between them and the relegation zone, the ball bobbled in and around the Fulham penalty area before eventually falling to Yohan Cabaye some 30 yards out.  The midfielder proceeded to scuff the ball, but in the process sent it low and hard and bobbling into the box.

The ball came to Cissé’s feet at speed some 15 yards from a crowded goal.  The 27 year-old proceeded to flick the ball over his head with his first touch while in the process taking three defenders out of the game.  His second touch was to guide the ball past advancing goalkeeper Mark Schwarzer and into the bottom left hand corner of the net for a sublime finish which led to scenes of jubilation at St. James’ Park as The Toon Army finally seem to have almost ensured their Premier League safety with the season now well into the home straight.

With the game level at 1-1 and Aston Villa enduring some terrible form which had seen the Birmingham side drop into the relegation zone, Paul Lambert’s men were in need of something special to raise them above the dross they had been producing.  Oh how Matthew Lowton produced something special.

With less than four minutes to play and the game seemingly heading towards a share of the spoils, Stoke cleared their lines from a corner.  Or so they thought.

The ball came looping out of the sky to 23 year-old Lowton who was standing some 30 yards from goal.  The right back proceeded to control the ball on his chest before launching a crashing volley high and into the roof of Azmir Begavic’s net with eight Stoke players inside the penalty area and in spite of two home defenders bearing down on him.  To say this was a special goal would be a gross understatement.

Whilst this was a goal of rare skill and perfect technique, it also propelled Villa out of the relegation zone and looks like giving them the end-of-season impetus they need to propel themselves to safety.

3 thoughts on “Top five goals of the season”