We’ve reached the final part of the Top 50 and it features two absolute superstars who lit up the league for Manchester United and Arsenal, playing huge roles in what was one of the best rivalries we’ve seen. 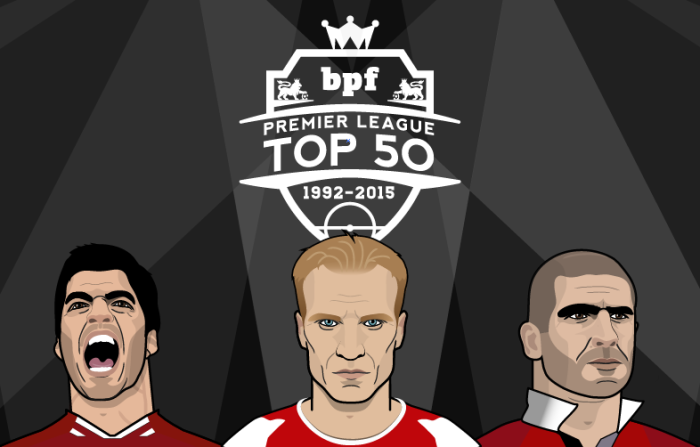 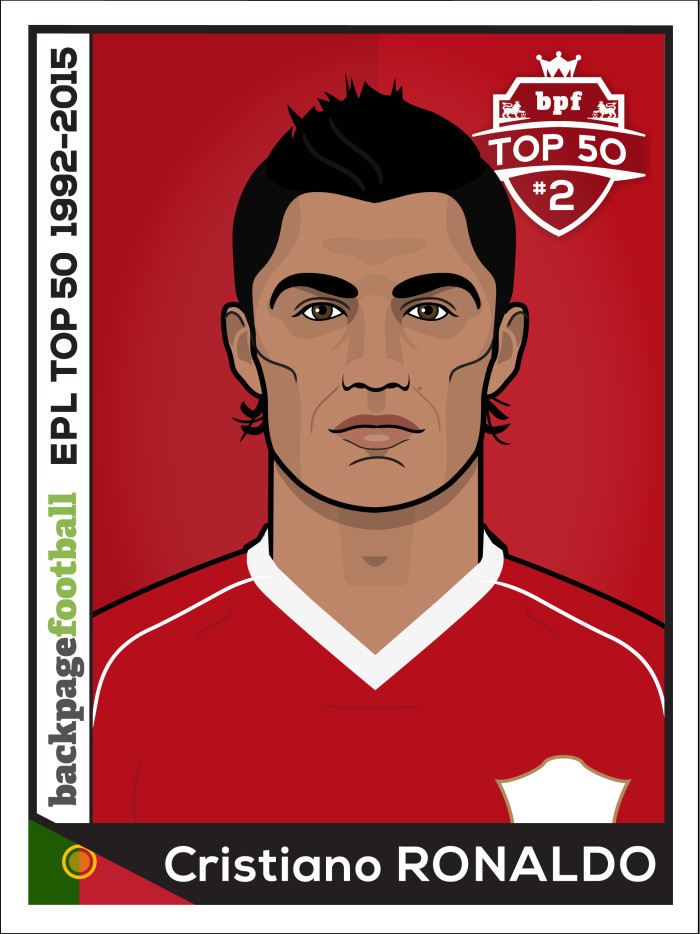 Despite the tendency of British football to myopically look in on itself, there is one player who, despite player abroad in a ‘lesser’ league, Cristiano Ronaldo is always in the periphery vision of Britain’s football media and fans.

In the quarter of a century or so that the Premier League has existed there have been many talented footballers – most of whom are included in this Top 50 series – and there have, arguably, been more famous players, who have achieved global fame – David Beckham, for example; or players who have had greater impacts at their respective clubs – Dennis Bergkamp, or Gianfranco Zola.

However, there are few players who claim to have displayed such raw, undiluted, brilliant talent whilst playing in England’s top division.

When the teenager became Manchester United’s new number seven in 2003, few outside of football’s inner circle could have predicted the impact the ‘Red Devil’s’ first Portuguese player would have on the club and the league itself.

However, those ‘in the know’ knew the talent that lay within skinny, greasy frame.

Arsene Wenger had attempted to woo the youngster with a tour of Arsenal’s training ground a year earlier, whilst Joan Laporta was keen on bringing Ronaldo to the Nou Camp – a prospect of Messi and Ronaldo playing together on the same team may have seen the majority of Europe’s clubs simply pack up an go home.

But it was Manchester United who desired a new number seven to fill the hallowed jersey and successfully convinced the Sporting Lisbon youth product that Old Trafford is where his destiny lay, although it seems it may have been Ronaldo’s performance in a ceremonial friendly against Manchester United that convinced the club more than the other way around.

To his credit, Sir Alex Ferguson seemed convinced that Ronaldo would be a star, no small weight behind those assertions, considering the talent the Scotsman has had at his disposal over the years.

He even went as far to stand firm on his decision to award the untested youngster the number seven squad number, with Ronaldo, in an early and rare moment of self doubt wanted to wear the less glamorous 28. Speaking in 2007, Ronaldo spoke about how the weight of the number spurred him on:

Ferguson said ‘no, you’re going to have No.7’ and the famous shirt was an extra source of motivation. I was forced to live up to such an honour.

Very soon into his career in England it was clear that Ronaldo’s route towards a level on almost unheard of greatness was set – early criticisms, mainly centred around the teenager’s proclivity to throw himself to the ground were perhaps merited, but soon gave way to shock and awe as Ronaldo soon lay waste to all and any defence put in his way.

The first of three Premier League trophies came off the back of controversy at the 2006 World Cup, where Ronaldo seemed to conspire to get his Manchester United teammate Wayne Rooney sent off.

Despite a vitriolic reaction from opposition fans, much like that endured by David Beckham after France ’98, Ronaldo went on to score 17 goals in 34 games, a scoring precedent that would only continue to grow.

In the following season Ronaldo was unstoppable, scoring 31 league goals, including one of his most memorable – a stunning free kick against Portsmouth that seemed to defy any reasonable understanding of physics.

After adding the Premier League title, Premier League Golden Boot and Premier League player of the season to his cabinet, Ronaldo went on to claim continental success in Moscow where Manchester United defeated Chelsea in the Champions League.

In many ways, the continental success warped the relationship between Manchester United and Ronaldo irrevocably. The player had signed a new contract the previous season, but the reports linking him with a mega-fee transfer to Real Madrid had persisted.

In December 2008, shortly after Ronaldo’s goal against Stoke City meant he had scored against every club in the league, his manager was forced into the now ludicrous statement that he wouldn’t sell Real Madrid “a virus”, but it seemed that Ronaldo’s stunning Premier League would be coming to an end sooner rather than later.

Despite the uncertainty, Ronaldo’s form in his final season continued to impress, and he was duly rewarded by being the first ever Premier League player to be crowned FIFA World player of the Year in January 2009.

He went on to score 18 goals to aid his club’s third Premier League trophy in a row.

That summer Real Madrid paid £80 million for Cristiano Ronaldo, a record-breaking sum, but an amount of money that didn’t seem out of step with the player’s ability or stature.

Such was the indelible mark that Ronaldo left on Manchester United, not one week seems to go by without at least one tabloid rumour suggesting the 30-year-old may be “coming home” to Old Trafford.

In writing this profile it was all too easy to get sucked into a stream of hyperbole, to the point it would almost become meaningless.

I could wax lyrical about his speed and strength; his deadly and innovative way of striking the ball; his almost inhuman ability to leap off the ground; but, instead, why not let another Manchester United legend, George Best, do the talking:

There have been a few players described as ‘the new George Best’ over the years, but this is the first time it’s been a compliment to me. 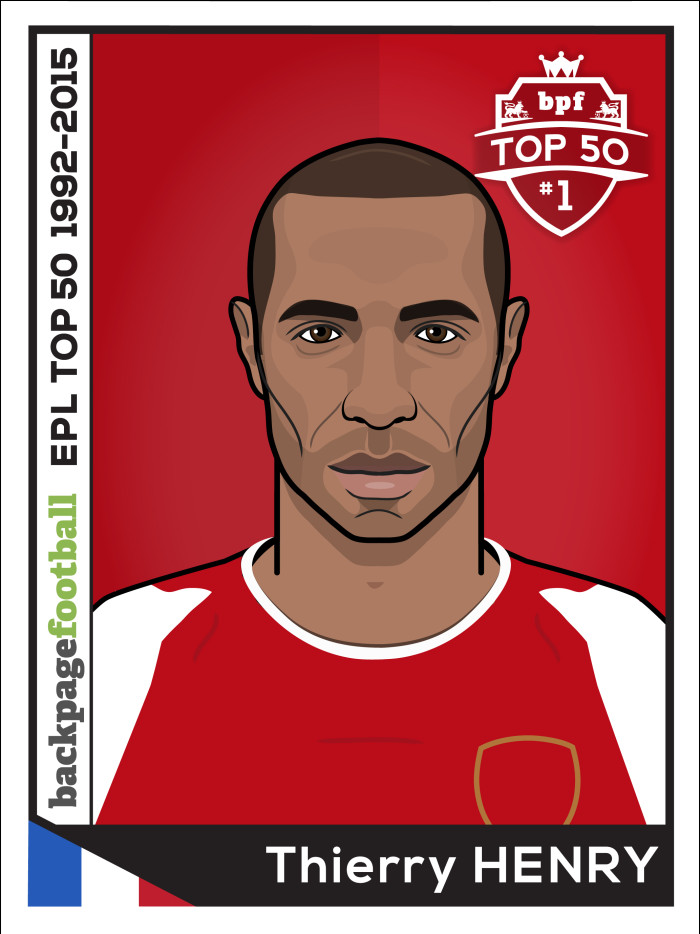 Both teams keen to put an early season marker down contest a tight game, and with half an hour gone, the ball comes to Thierry Henry.

With his back to goal, and stalwart veteran Denis Irwin on his shoulder, there seems no apparent threat but Henry manages to flick the ball up and with a swivel of his body, he unleashes an absolute thunderbolt volley that flies past Fabian Barthez in the United goal.

It was a moment of pure genius and class that Henry would go on to replicate time and time again for the Gunners.

Having moved to Juventus in January 1999, he trudged through a tough and ineffective season out on the wing, before rejoining his former Monaco boss Arsene Wenger at Arsenal in the summer of that year.

Moulded from a winger into the striker that Wenger always thought he could be, he went on to score 17 league goals in his debut season, and 26 in all competitions.

In a career for the Gunners that spanned eight seasons, he would go on to win two Premier League titles and three FA Cups in his time there, and alongside fellow French team mate Patrick Vieira, would help cement the legacy of Arsene Wenger and his football philsophy.

He would finish his time at Arsenal as the clubs all time record goalscorer, but Henry was far more than just a finisher. A delicately clever player, his skills and tricks would dumbfound defences over and over, and his goals for the club ranged from 30 yard exocets, to quick thinking free kicks and back heels, finishing top scorer in the league four times.

Henry was most dangerous when picking up the ball from deep and drifting out wide to the left, and whether it was assisting his fellow team mates or going for the box himself, inevitably it ended in a goal for Arsenal.

For me, Henry’s time for Arsenal is encapsulated in one game during the 2003/04 campaign. Having mentioned two years earlier that he thought his team could go through an entire season undefeated, Arsene Wenger saw his club reach April of that season still without a loss.

Having been dumped out of the FA Cup by Manchester United and out of the Champions League by Chelsea in quick succession, Liverpool visited Highbury and with the Merseyside team 2-1 up at half time, it seemed as if the season was unravelling for Wenger and his men.

With just over 10 minutes of the game remaining, Henry showed what he and the team were all about. Picking up the ball from deep, he went on one of his trade mark runs, beating player after player, before entering the box and causing chaos.

Slotting the ball under Dudek, the ground erupted as he contributed another hat trick for the team, and the Invincibles were back on track. The rest is history.

Wonder goals in the San Siro against Inter Milan in the 1-5 destruction of the Italians, and another beautiful strike in the Bernabeu against Real Madrid helped cement his legend among the red faithful, and fittingly, he scored a hat trick in the final game at Highbury, before the club moved around the corner to the Emirates.

Henry wouldn’t go on to win another league title with Arsenal, and narrowly missed out on European glory in 2006 against Barcelona, the club he would go on to join, but his love for the club was always apparent.

His return in 2012 on loan and subsequent goal against Leeds United was a fairy tale end that warmed the hardest of hearts, and many wouldn’t bet against him one day returning as manager of the club he loves.

A creative, clever, unpredictable player who added so many intricate layers to Wenger’s beautiful football philosophy, his legend lives on at Arsenal from a career where he scored 228 goals for the club as one of the Premier Leagues greatest ever.