The votes have been tallied so it’s time to reveal Back Page Football’s Top 50 Players in the World for 2014!

It all comes down to this, and it will be no surprise to anyone to see that the top two has remained the same for another year. Lionel Messi and Cristiano Ronaldo continue to be the benchmark footballers after enjoying a superb 2014. 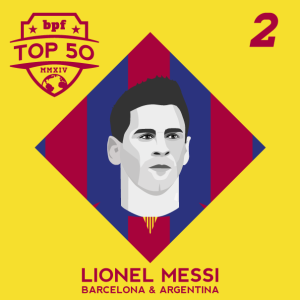 What follows is a cliché within a cliché, at this point: what can we say about Lionel Messi that has not already been said? So much ink and so many pixels have bled over this Argentine genius that anything more seems superfluous at best and redundant at worst.

Nevertheless, we must talk about the diminutive hero of both FC Barcelona and Argentina. Many people will consider Messi’s 2014 something of a disappointment for two reasons: one, that he did not score as many goals as he did in, say, 2012, and two, that he did not lead his nation to World Cup glory.

It is wholly unfair and almost hypocritical to judge Lionel Messi based on his previous performances and ungodly expectations, the likes of which do not suit his style. What has always made Messi appealing has been his indifference to the public’s enchantment and his desire to exclusively score goals, anywhere and everywhere that he can.

Messi trudged into 2014 fresh off a Ballon d’Or loss to Cristiano Ronaldo, something which undoubtedly ate at him and goaded him into brilliance. He scored in five straight La Liga games in February and March and notched one against Manchester City in the Champions League, reiterating his intercontinental supremacy.

In fact, he notched back-to-back hat tricks against Osasuna and Real Madrid in March, just in case anyone harbored any suspicion that his talent was going the way of the compact disk. Barcelona came up short in La Liga, but it was due to no fault of Lionel Messi, whose whimsy drew sparks of insanity from Ray Hudson, among others.

A lasting image from 2014, at least in the infinitesimal world of football, is Lionel Messi’s eyes when he received the Golden Ball for this year’s edition of the FIFA World Cup. Very few things in the world can be as disheartening as being given a trophy as a tournament’s best player while watching the opposing team celebrate its victory over you.

To be certain, Messi played brilliantly throughout his spell in Brazil. His goal against Iran in the 19th minute solidified his already-guaranteed place at the world’s table, suggesting that perhaps he could get it done on an international stage when apart from his Catalan comrades. Still, watching him hold a trophy after having been within reach of the one he actually wanted only moments before is a test in human spirit and the will of humanity at large, no matter where your faith lies.

As if trying to prove a point, the 27-year-old has come out blasting this season for his club, scoring in a majority of the matches, mostly with his weaker right foot and typically more than once. The presences of Neymar and Luis Suarez, world-class goal scorers in their own rights, have done nothing to deter Messi on his mission to place a ball in the back of an enemy net.

His hat-tricks against Seville and APOEL in early December seem to point to a renewed sense of urgency, one which hints at his prime and points to where he could be moving in the future. Disposing of La Liga and Champions League scoring records within days of each other has become expected of Messi; it’s only a matter of time with those sorts of trivial pursuits.

What we talk about when we talk about Lionel Messi is one of the world’s greatest soccer players, unhinged and revealed only so much as he allows us to see. His reality is one in which impossibility becomes plausible, even standard, and we can do nothing but watch.

What Messi lost at the World Cup is what the rest of us gained in the aftermath: wrath, raw and unchecked, as it seeps from the feet of one of the greatest players this game has ever seen. Lionel Messi’s so-called “off-year” makes him human. What he’s done in it discloses his divinity. 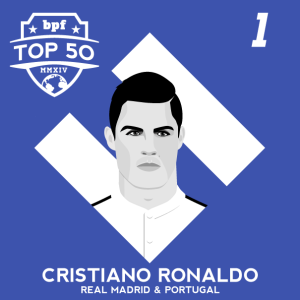 Cast your mind back to the cocky, terribly coiffured Cristiano Ronaldo that joined Manchester United as a callow yet showy teenager, prince of the pointless step-over, at times beguiling yet frustrating. Now compare him to the 29 year old record breaking machine that has dominated La Liga and Europe for the last five years.

It’s instructive just how far “CR7” has propelled himself through the chilling fixity of his ambition to maximise his natural talents. In many ways Ronaldo has moulded himself into the paradigm of the ultra-modern 21st century footballer, pace, power, physique combined with the finest technique.

But this ultra-modern footballer feels like an anachronism, someone parachuted into the modern game from the 1920s or 30s. Just look at the ridiculous scoring statistics for Real Madrid (282 goals in 268 games in all competitions); it feels like the scoring record of a Dixie Dean, Josef Bican or Franz “Bimbo” Binder, not a man born in 1985.

The rest of this piece could just be spent listing the man’s various achievements, the scoring records broken, the frightening consistency of his talent. As the Guardian’s Side Lowe pointed out, he’s already scored 23 goals this season with 24 games still to go. Historically that would already have been enough to win the top scorer award for 33 of La Liga’s seasons.

Earlier this month he notched his 200th La Liga goal, against Celta Vigo, he had hit that mark in a mere 178 games. He’s gone from that skinny, occasionally superfluous winger of his teenage years to the intimidatingly direct, all round forward. At the age of 29 he’s at that point in his career usually viewed as being at his peak.

Despite losing out on the Liga title to neighbours Atletico, Ronaldo was still a crucial part of Real’s Decima Champions League victory, getting his obligatory goal in the final minute of extra time. It was his 17th goal of the Champions League campaign. A Copa del Rey triumph over arch-rivals Barcelona and the recent Club World Cup victory over San Lorenzo mean that 2014 hasn’t been short on silverware.

He was equally impressive for Portugal. National team captain since 2008, Ronaldo broke the national scoring record previously held by Pauleta over the course of 2014, he scored four in qualifying (including a hat trick in Windsor Park against Northern Ireland) as well as all four goals in their successful two leg playoff against Sweden. A pair of matches that were billed less as a competitive game between two nations with long footballing histories, and more as a personal battle of skills and egos between brand CR7 and Zlatan.

Despite Ronaldo coming out on top, his World Cup would perhaps turn out to be the low-point of his year, suffering from thigh and knee injuries he was still expected to lead the Portuguese attack and be their main scoring threat.

While he did grab a late, opportunistic winner in Portugal’s final group game (a 2-1 win over Ghana) it was not to be enough to get them out of their group after their opening game 4-0 shellacking by Germany.

There is still plenty of time for Ronaldo to dominate a tournament there remains a niggling feeling that World Cup 2014 and the previous European Championships represented his best chance for international honours and to have his Maradona 86 moment.

Still, if that is the greatest criticism that one can level at Ronaldo, then it is indicative of the level he is playing at. For example, Alfredo di Stefano, the Real Madrid legend whose goal scoring records Ronaldo is closing in upon never played a single game at a World Cup yet no one would ever doubt his greatness.

In fact, if it were not for the occasional negative public reaction to Ronaldo’s personality (the preening, the occasional moaning, the necessary arrogance) and the presence of a certain Lionel Messi then Ronaldo would be practically immune from criticism.

It seems impossible to separate Ronaldo from Messi, there is a sense that it’s a freak occurrence that both would occupy the same time, space and indeed league at the same time, as though such talent should be separated by generations. There is however the differing view that the continued relentless excellence of the other spurs each player on towards the pursuit of further personal greatness.

Like the Beatles’ Rubber Soul spurred Brian Wilson to produce the Beach Boys masterpiece Pet Sounds which in turn influenced the creation of Revolver; continued excellence spurs continued excellence until levels of performance which are otherworldly seem entirely prosaic.

In the way that the Beatles exist in a space separate and beyond simple pop music of the 1960s, so Cristiano, through ferocious self-belief, has elevated himself above the role of mere footballer into one of the greats.