It’s time to reveal the winner and runner-up of this year’s Top 50, as voted for by the readers of BackPageFootball.

There’s a changing of the guard at the top of the pile, with Lionel Messi finally relinquishing his crown to Real Madrid superstar Cristiano Ronaldo. 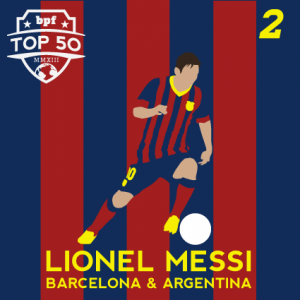 2013 has been a difficult year for Lionel Messi. Plagued by injuries, he’s only managed to score 45 goals and provide 16 assists, while winning just the La Liga title in record-breaking style. Put it like that, and you wonder what all the fuss is about.

This is the first year, or at the least the first since Barcelona became *his* Barcelona under Pep Guardiola, that questions have been asked and doubts have been raised about the Argentinian.

His status as best in the world has not only been questioned, it increasingly looks like one he is going to lose. Franck Ribery was the favourite to win the Ballon d’Or, being the best player in the world’s best team.

However, since he defeated Zlatan to take Portugal to the World Cup, and FIFA changed their voting deadlines basically – if not officially – so everyone could vote for him, it’s been evident that Cristiano Ronaldo is going to be crowned the World Player of the Year 2013. At no point has Messi – winner the past four years – really been considered favourite, even though he’ll probably finish second ahead of Ribery.

Part of this is due to the unrelenting goalscoring prowess of Ronaldo; a hulking, unstoppable force whose sole raison d’être is to put the ball in the back of the net more times than you believe should be possible.

While Ronaldo’s brilliance in the year two-zero-one-three is undeniable, his usual competition has suffered a slip in his own standards by virtue of that which has, somehow, largely escaped his career thus far: injury.

An April 2, in the Champions League quarter-final against PSG, Messi – having already scored in the game – went off with a hamstring injury.

It looked fairly run-of-the-mill at the time, but Messi is no run-of-the-mill player and, because of that fact, he was rushed back in the second leg. Even at around 60% fitness, his presence coming off the bench was enough to inspire the Catalans to victory, although at a greater cost.

He has relapsed on numerous occasions since, and there’s been talk of him not being looked after physically as well as he was under Guardiola (when he went virtually uninjured). That he hardly rested during the off-season – jet-setting around the world to play various money-raising friendlies – can only have made things worse.

It has also been a year of transition and uncertainty at the Camp Nou, with Tito Vilanova’s health meaning he ultimately had to step down, and the first ‘outside’ manager in a number of years was brought in.

Tata Martino has implemented a more direct approach, as well as trying to keep the club’s famous tiki-taka philosophy, and we even saw Messi deployed on the right of attack for the first time since he became the phenomenon we’re used to.

And yet, despite all of this – injuries; playing half-fit; a new manager; a new superstar teammate in Neymar – Messi is still one of the two best players in the world.

Too much is focused on the debate of who is better: Ronaldo or Messi. We should be grateful that two all-time greats are playing not just at the same time, but in direct competition with each other.

However, for my money, Lionel Messi is already the greatest to have kicked a ball. He is a freak of nature, and a freak of nurture. Most players would kill to have the sort of 2013 he has, and yet for him it has been fairly disappointing. That’s how good he is.

In 2014 he’ll return, hopefully fit, with a point to prove and a World Cup firmly within his sights. The scary thing is, at just 26 years old, his best is perhaps yet to come. 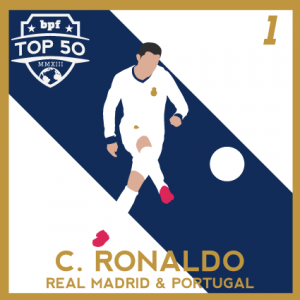 Relentless. No better word sums up 2013 for Cristiano Ronaldo as his pursuit of greatness truly stepped up a gear. In terms of personal accolades, he couldn’t be happier, breaking record after record in search of silverware.

This year Ronaldo hit an incredible six hat tricks for Real Madrid, taking his overall total to 23 trebles for Los Blancos. He finished the year with 69 goals in 60 games for club and country, with a ratio of 1.15 goals per game.

In the international scene, it seemed like Ronaldo was dragging his country to the World Cup next year in Brazil.

He netted ten goals in nine games for his country in 2013, including a hat trick in Belfast against Northern Ireland and four over the two play-off games against Sweden last month.

In a game that was billed as Ronaldo v Zlatan, the Madeira-born forward really stole the show. (To be fair Ibrahimović notched two himself).

The Real Madrid number seven equaled his country’s goal scoring record of 47 that is also held by former PSG striker Pauleta, another record he will undoubtedly break next summer.

With regards to silverware, 2013 wasn’t a productive year. Real Madrid’s inconsistent start to the 2012/2013 season saw Barcelona lead La Liga from the off with the gap too large to make up. Los Blancos eventually finishing 15 points behind the Catalans.

Ronaldo top-scored in the 2012/2013 Champions League with 12 goals as his side lost out to Borussia Dortmund at the semi final stage. With all of this, Ronaldo and Real Madrid finished the 2012/2013 campaign without a trophy.

The 2013/2014 season sees Ronaldo continue his sparkling goal scoring form. He became the first player to score nine times in the Champions League group stage with his 26th goal of the season sealing the record tally.

In the league the Real Madrid front man clinched a unique accolade with his two goals in the win over Elche. The goals meant that he has now scored against every team he has faced in the Primera Liga. An outstanding feat.

In what has been a well-documented battle with fellow icon, Lionel Messi, Cristano Ronaldo finally looks set to get his hands on the coveted Ballon d’Or prize. He is the bookie’s favourite ahead of the Argentine and Bayern’s Franck Ribery, and has already collected the 2013 World Soccer player of the year. With Messi being distracted by injuries this year, the home straight has opened up for Ronaldo to seal the award for the first time since 2008.

His dazzling performances in a disappointing year for his club have shone through as a beacon of hope this season so far. He is fully deserving of the #1 spot in this year’s Back Page Football Top 50 as he (alongside Messi) continues to raise the standard, not only for himself, but also for the sport.

That’s it until 2014, thanks to all who got involved in the voting, writing and reading!