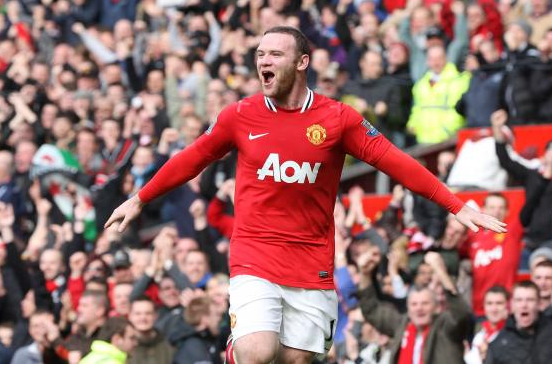 Since making his Everton debut against Tottenham Hotspur in August 2002, Wayne Rooney has not only scored a great quantity of goals in his decade of club football but some memorable, skilful ones at that.

Rooney relishes the big games. This was a sensational match, with Kaka outstanding in the midfield for Milan. United, knocked out in the group stages of Europe the season before, had entertained Europe with some scintillating displays, most notably a 7-1 thrashing of Roma in the quarter finals. Keen on retaining a league title not won since 2003 and awaiting an FA Cup Final against Chelsea, the squad was being pushed close to its limits, epitomised by Sir Alex Ferguson having to play both left-backs Patrice Evra and Gabriel Heinze in the defence, whose confusion lead to Kaka’s second goal that cancelled out Cristiano Ronaldo’s bundled opener. Buoyed by an electric atmosphere, United peppered the Milan goal and equalised when Rooney latched on to an imaginative Paul Scholes pass. His winner came in the last minute as Ryan Giggs slipped the ball through to Rooney who surprised goalkeeper Dida by instantly hitting the ball to his near post, beating the Brazilian with accuracy and power. The technique was superb considering the pace he was running at, the fact that he was away from goal and how he used defender Allessandro Nesta to block Dida’s view. In a torrid second leg, United were soundly beaten 3-0 at the San Siro annulling the importance of Rooney’s goal.

Rooney completes hat-tricks with style, and tends to show off his free-kick skills on these occasions. His United debut in 2004 symbolised this, with an incredible collection of goals against Fenerbahce. His first was a powerful instant shot from a Ruud Van Nistelrooy through-ball, whilst his second was a precise daisy-cutter. His third, a measured free-kick capped off the hat-trick. Against Arsenal in the 8-2 thriller in 2011, Rooney excelled at set-pieces, scoring two wonderful free-kicks before finishing with a penalty. The season before, Rooney scored a vital hat-trick, from off the bench, against relegation doomed West Ham United. Two down at half-time, Rooney responded with a tremendous free-kick, a cool and clinical finish to equalise and a penalty to put United in front, before Javier Hernandez finished the comeback. It was a talismanic performance by Rooney and his free-kick inspired the comeback. Overshadowed by the unique and devastating technique of Ronaldo for so long, Rooney’s free-kicks are rare and this is surprising when his ability is so apparent in cases like this. He swept the ball around the wall beautifully and gave Robert Green no chance. Consequently it’s confusing that he has not taken more in his career and is content to allow players such as Nani, who has a very poor success rate, to take them instead.

With the departure of Ronaldo, Rooney carried a sub-standard United team through the 2009-10 season and lead the line in a way unseen before from him. For maybe the only season in his career, he was an out-and-out striker and this showed with a superb tally of 34 goals, bettered only by last season’s 35 in all competitions. Rooney improved his heading technique and many of these 34 came from his head, which was in-part due to the purchase of Antonio Valencia. Rooney enjoys an excellent relationship with Valencia, whose direct wingplay and good crossing ability gives plenty of service to the striker. Rooney scored a number of memorable headed goals this season, such as in the League Cup semi-final against Manchester City and in the final itself against Aston Villa, and also his second in this European match. United had started awfully, conceding quickly to Ronaldinho and equalising fortuitously through a Scholes miskick. However, they were galvanised in the second half, with Valencia terrorising the Milan defence. His deep cross was headed brilliantly in by Rooney who hung in the air before heading across the goal, with the ball looping in. From his 100th goal for United away to Wigan Athletic to a brave finish in the FA Cup against Manchester City in 2012, Rooney and Valencia have always combined to good effect and this was epitomised in this San Siro strike.

By the time of Rooney’s transfer in the wake of Euro 2004, United were a team in transition. Eclipsed by Roman Abramovich’s spending and Arsenal’s Invincibles, the teenage Rooney often had to carry a team that some would consider to be in decline. Poor buys such as Eric Djemba-Djemba, Kleberson and Liam Miller were highlighting the huge voids left by previous star names, most notably Roy Keane. The raw Ronaldo was an unpolished, frustrating figure, rather than the world-beater he would become from 2006 onwards. Depressed by the Glazer take-over and poor performances on the pitch from 2004-6, the instant success of Rooney was one of the only highlights from a concerning period. Straight from his debut, he was exciting and fearless and scored some of the best goals of his career. His first in an FA Cup tie against Middlesbrough summed this up. He beat the offside trap and noticed Mark Schwarzer off his line. Without breaking stride and with the ball slightly behind him, Rooney confidently floated the ball into the empty net- a goal worthy to win any tie, until…

… Rooney showed off his perfect technique with a blistering volley from a Louis Saha knock-down. The route-one method for this goal was simple but few in the game could execute the volley with such panache. Goals like this proved why Rooney was the most enthralling and entertaining English player since Paul Gascoigne.

United have always loved to counter-attack and therefore embrace players with pace, directness and an efficiency on the ball. The scintillating partnership between Rooney and Ronaldo provided United with some superb counter-attacking goals and caused them to be one of the best teams in the world by the time of 2009. Evidence of this came as early as 2007 when Rooney concluded a rapid counter attack against Bolton Wanderers  with a delicate chip. Arsenal were ripped apart in the 2009 European Cup semi-final, with Ronaldo’s sublime counter-attack goal sealing the victory at the Emirates. Rooney’s best counter-attack goal, however, came against the same opponents but with Ronaldo in Madrid. Like the goal the season before, Ji Sung Park played an important role, whilst Nani steamed down the flank and provided Rooney with a precise pass. Rooney’s clinical finish, culminating from a sprint the length of the pitch, was outstanding and proved his athleticism, coolness and superb ability to be a team player.

Every football cliché in the world could have been used for Rooney’s first senior goal, but this was truly an unbelievable way to announce yourself to the footballing world. Taking the context away, this is still a wonderful goal. Rooney controls the ball expertly, swivels and curls an unstoppable shot past David Seaman. Putting this goal in context though, it is an even more amazing goal, even for the temerity for a 16 year old to dare challenge one of the best defences in England. Few outside of Merseyside would have heard of him and Arsenal were unbeaten for 30 games, adding to the shock of the goal and becoming a foundation for his impressive history against Arsenal, with many of his milestones (1st and 150th United goals for example) coming against the Gunners. This goal also showcased the forward’s ability to score from outside of the box, which he continues to do, such as against Fulham and Athletic Bilbao in 2012.

One of Rooney’s trademark finishes is the chip, as shown against Middlesbrough before, and this against Portsmouth was his finest. His goal against Middlesbrough was rightly applauded but from the vantage point of the armchair, it was not surprising that he decided to chip a keeper 20 yards off his line. His chip against Portsmouth was majestic because arguably David James was still on his line yet could do nothing but watch the ball sail over his head, due to the flawless accuracy and surprise of this effort.  Arguably this was skill rivalled only in the United annals by Eric Cantona.

Competing with Arsenal as Rooney’s favourite opponents are Newcastle, from a curler in 2008 to a swivelled volley from a Darren Fletcher cross in 2004 at St James’ Park. His goal in the return fixture was his greatest against the other side that contended for his signature in 2004. Rooney is often criticised for his aggression, and this has been very apparent for England, especially in his sending off against Portugal in the 2006 World Cup, but it could be argued that his aggression brings the best out of him. Sometimes, like last Monday against Everton, Rooney can be subdued and restrained. In this game, Rooney had become frustrated and United were a goal down. Rooney was angrily shouting at the referee when the ball arrived to him. He smashed it perfectly in the net and then hit it again as if unsatisfied by his first effort. His lack of celebration portrayed a raw talent whose aggression could actually benefit his skill rather than hinder.

An obvious choice but this goal of agility, power and ultimate skill could not be scored by many and ranks as one of the greatest Premier League goals of all time… no, he didn’t shin it!

I do not own any of the above videos and intend no Copyright infringements. They are merely there to highlight my points and for the enjoyment of those who wish to watch.