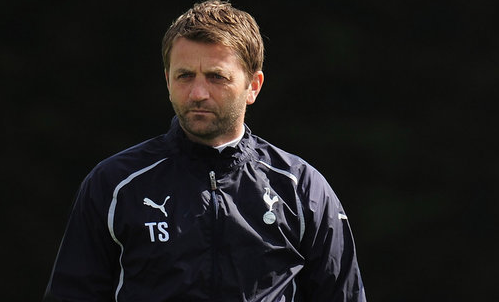 The recent ‘resignation’ of Steve Kean, has brought the figure of Tim Sherwood firmly to the forefront of football news.  Sherwood has heavily linked to the vacancy at Ewood Park, since the Scot decided to end one of the longest running circuses in English football. Sherwood, of course is an integral part of the Blackburn Rovers story, having captained them to the clubs greatest achievement in their history.

Sherwood started his footballing career at Watford then Norwich before he joined Kenny Dalglish’s revolution at Ewood Park. At first, it appeared that Sherwood would prove to be an expensive mistake, as he struggled to adapt to life in Lancashire.. He showed a mental toughness and self-belief something that would become a trademark of his career, to not only grow into the side but also to become the captain and leader of Dalglish’s side.

Under his leadership, he helped Blackburn to finish second in the 1993/94 season and to the glory of the League title the following season. His spell at Ewood Park would not yield anymore trophies as Rovers struggled to build on the foundations of the first League title and Sherwood left the club for Tottenham in 1999.

His playing spell at Tottenham was not a successful one. He became a popular figure in the dressing room and in the stands where his leadership qualities and whole hearted approach to the game were greatly admired. Sherwood, however, like Spurs, impressed occasionally but failed to consistently perform. The closest that Sherwood and Tottenham came to success was a defeat to Sherwood’s old club Blackburn Rovers in the 2002 League Cup Final. Sherwood’s time at Tottenham ended after yet another row with boss Glenn Hoddle.

The latest leg of his playing career brought him down to the south coast to Harry Redknapp’s Pompey, where he was part of the side that won promotion to the Premier League and Sherwood played on the following year with Pompey in the Premier League.  Sadly for Sherwood, a bad leg break ended his career at Pompey. The intelligent midfielder ended his career with Coventry where his aim of helping Coventry to get promoted never materialised.

Sherwood ended his career with only two medals and shockingly only three full England appearances to his name. In this current era of midfield dominance perhaps Sherwood would be more valued had he of played the game today.

Because of his recent coaching success, many pundits assume that Sherwood was always destined to go into coaching. This was not the case-Sherwood’s telegenic nature and his outgoing personality meant that media work was where he would pop up first after his retirement. Those who saw Sherwood on Sky and Setanta saw a shrewd analyst with a sharp football mind.

Sherwood’s close relationship with Harry Redknapp meant that the new Tottenham Boss was only too aware of Sherwood’s talent. Redknapp appointed Sherwood to his backroom staff, where his easy manner and tactical nous quickly impressed those in power at White Harte Lane. Sherwood reputation and role soon began to grow.

Sherwood was heavily involved in the youth development side of the club, travelling to Germany and South America to look at the work of successful academies over there. He also had a significant input into Spurs new state of the art training facility. Indeed he spent time in France and at AC Milan, to analyse the link between the quality of training facilities and performance levels.

It is therefore clear why Levy is anxious not to lose the man from St Albans to Blackburn Rovers. It is patently obvious that Sherwood multi-faceted skill set would be extremely difficult to replace. One high profile source at Tottenham described Sherwood to me as “purely and simply driven”.

Sherwood is someone who wants to work at the top of his profession. He has developed a broad based experience between youth development, first team coaching and scouting which would be of huge benefit for any potential management job. His ambition was displayed when earlier this summer he lobbied hard for a Director of Football job at Tottenham, the role was not in existence at the time and Spurs decided to go with AVB in sole control with Sherwood continuing in his non-defined ‘technical co-ordinator’ role.

In the last few weeks it has been leaked to the media that Spurs are now actively looking to appoint a Director of Football. It is therefore surprising considering how badly Levy wants to keep Sherwood that Franco Baldini appears to be the front runner and not the highly rated Englishman.

Sherwood is now presented with both a dilemma and an opportunity. Should he bide his time at Tottenham in the hope of a more defined role, or does he go it alone at Blackburn and try build a reputation as a football manager. It is clear that Baldini is under serious consideration for the Director of Football job. Sherwood’s decision would be easier were the Italian to be appointed.

Everyone you speak to about Tim Sherwood states unequivocally that he has the talent and ability to succeed at the highest level of football management. The highly ambitious Englishman might not get a better opportunity. The Blackburn squad has the quality to be there or there about come the end of the season.  Sherwood has a great love for Blackburn and he is himself a hugely popular figure at Ewood Park. Indeed he could also help heal some of the rifts between the club and its supporters.

Spurs are an extremely well run club who understandably would be loath to see such an asset leave. His long term and strategic thinking has been a huge asset for Tottenham but perhaps it is time for the St Albans native to start thinking long term about his own career.