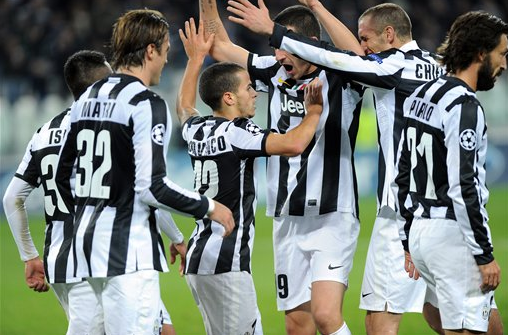 Three wins, three draws. 12 goals scored and only four conceded. Juventus must be happy with topping Group E in this year’s Champion’s League, but when the group was first drawn, could they have hope for such a campaign?

In a group with the current European Champions and the always tricky Shakhtar Donetsk, it looked like it could be a tough group stage for the Italian Champions. Of course, it’s ironic that I miss out the name of FC Nordsjaelland; a team who would take their only point of the whole campaign against Juventus. But, from looking at it, Juve would need to have one of their strongest campaigns and make the Juventus Stadium, as they say, a “fortress”.

In terms of the domestic side of things, the form could be described as unstoppable. Literally, almost. Finishing the previous season as undefeated would give anyone the confidence to go into any match and not lose. And, of course, this run continued into this season and campaign. However, the shock that manager Antonio Conte would not be available at the touchline for a number of months could have been a huge factor as well, with many players speaking out at how inspirational the former Juve player can be. Signing an unfit Nicklas Bendtner , although on loan, did not exactly scream ambition either. It was a group stage that could have went a number of ways, but to finish it undefeated says an awful lot about Conte’s Juventus. The last three games, in particular, show the character of a team who could well be a surprise in this year’s competition. Eight goals scored, no goals conceded and nine points.

Going into match day four, Juventus had only three draws and a return match at home to FC Nordsjaelland was next-a match they were expected to dominate. Sounds fine against the minnows of the group, of course this was also the case for the away leg where the “minnows” managed to grab a draw. Doesn’t matter how well Juve played, how many chances they squandered-one point was not in the plan. Neither was the 1-1 result at home to Shakhtar Donetsk in the previous match. Or the fact that rivals Inter had just ended their unbeaten run on the Sunday 3-1, so there was a sense of keenness around the Juventus Stadium, to get the match over and a good result with goals. And so it was. Juve did dominate and were unstoppable in the first half, eventually running out 4-0 winners. The usual Juventus way of goals coming from anywhere was on show as well, with Marchisio, Vidal, Giavinco and Quagliarella all on the score sheet. With no 30 goal a season forward, this has to be the way for the Italian giants-maybe a weakness which will be addressed in the January transfer window. The rumours surrounding possible targets are still circulating, and will continue to do so until the window closes. Until then, although not a perfect start, Juve were still very much in with a realistic shout of qualifying to the knock out stages.

The Chelsea game brought up a lot of questions before kick-off. Chelsea had just won their previous match with Shakhtar, just, 3-2. This coming after a 2-1 away defeat in Ukraine.  Chelsea’s league form was not great, with Juventus also dropping form in Seria A. But it was a class display from the Bianconeri, disposing of the reigning champions 3-0. Juventus attacked from the start of the game, and never looked troubled in front of their own fans in a packed Juventus Stadium. Goals from Quagliarella, Vidal and Giovinco rounded off an excellent display, and meant that going into match day six, Juventus would only need a point away to Shakhtar to qualify. Not an easy task however-just ask Chelsea.

Approaching the final match, you would forgive Juventus for playing for a draw. It’s all that was needed, and Shakhtar would not be an easy game by any stretch. But it was Juventus that overhauled the Ukrainians to finish top of Group E. Although an own goal, Juve were good for their win, creating chances and looking solid all over. Chelsea done all they could by hammering the Danish side 6-1 at Stamford Bridge, but it was not enough as third place was their only reward. The group would finish with Juve top, and a poor Chelsea in third place, meaning an unexpected place in the knockout stages for Shakhtar Donetsk.

Looking at the campaign as a whole, certain results and stats stick out. Away from home, to get anything from the European Champions is a great feat. Especially in the first match of the group-it really did outline the intent from a strong Juventus side. As well as disposing of them 3-0 at home, of course. Not such a great feat would be the away 1-1 draw with FC Nordsjaelland, with that being the only point picked up by the Danes. But prior to these matches commencing, no one would have said the Bianconeri would come through that group undefeated, and sitting pretty on top.

The last three match days really showed what this year’s Juventus side is all about. Eight goals scored, three wins and genuinely impressive performances ensured that The Old Lady would qualify as group winners. Three clean sheets during this period that brought up opponents of the quality we know the Champion’s League has cannot be overlooked either. With this running alongside being two points clear at the top of Serie A, it looks like Juventus could be a good shout for further progression in the Champion’s League, and another good domestic campaign. January could deliver a new striker, potentially, and the start of December sees the return of the boss at the touchline, which can only be a boost even further for the current Italian Champions.