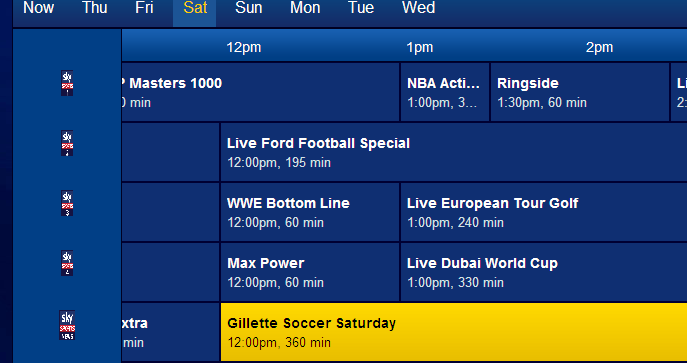 Tired of tuning in to watch a football match, only to sit there almost two hours later and wonder why you bothered? Wish there was a way of somehow knowing what was going to happen beforehand to save you bothering investing over £40 to see your team trudge out onto the pitch, lie down and have their bellys tickled by the opposition? Well, good news!

Here is the latest round of Premier League fixtures, presented in the format of television listings, detailing exactly what you can expect to see this weekend. Have a read, clear your recording device, set some reminders and enjoy what’s on offer, safe in the knowledge you won’t have wasted your time.

REPEAT. Manchester United arrive at the Stadium of Light and beat a terrible Sunderland side with the help of a host of former players. Martin O’Neill takes out his frustrations on a bottle. Available in 3D, provided you decide to actually go the match. Otherwise in 2D unless you’re a moron with those glasses.

NEW SERIES. Simmon Rimmer vocalist Nigel Adkins returns to football management to oversee his side look generally decent against an Arsenal side that labour but ultimately win. However, with John Motson looking on, the big question remains – will he heap praise on Santi Carzola or just fall asleep?

New reality show in which two thousand Newcastle fans are offered a season ticket for a lap-dancing club of their choice if they are the last fan to remain topless in freezing conditions. Meanwhile, on the pitch Jack Rodwell makes a cameo appearance, credited as ‘Frightened Team Mate Number 1.’

Comedy Special. Interim Clown Rafael Benitez (played once again by the Fat Controller from ‘Thomas The Tank Engine’) is barracked from Chelsea fans demanding a return to the old (2005) Chelsea, David Luiz runs around all over the pitch after the ball – accompanied by the theme tune from Benny Hill. Contains flash bannery.

‘The One With the Thick Mastermind Contestant’ where Jonathan Pearce almost reaches climax constantly yelling ‘pass, pass, pass, pass’ as the Welsh side who created passing meet the London side with a tradition of passing (missing through years 1970-2008). For those watching in black and white, Swansea are in the white. And Tottenham are in the black.

Western. ‘This league ain’t big enough for the both of us!’ bellows Sam Allardyce, resplendent in poncho and cowboy boots, as he and ‘Alcoholics Anonymous’ poster boy Steve Clarke battle for the title of ‘Best team in the league with West in their name.’ Romelu Lukaku scores, West Ham lose and the game is generally boring.

Acclaimed World Cup legend Howard Webb guest stars in a Relegation Six Pointer™ special. With a trip to Wembley on the horizon will Norwich be able to take advantage and sink their excited hosts? Meanwhile, in the directors’ box, Dave Whelan reveals an interesting past story about an injured leg.

Bring on the ball! Tony Pullis produces another hit variation of football, as his travelling cast of talentless buffoons launch ball after ball into the air. With Everton showcasing a change of goalkeeper, look out for the post game blooper reel featuring hilarious outtakes! Contains strong necks.

‘Being: Liverpool’ spin off in which fictional US team Liverpool try to get their own back on Aston Villa after being beaten on ‘Ridiculous Management Scarf Day’ at Anfield earlier this season. With Clive Owen narrating, will the ‘most impressive possession of the spherical instrument team’ be able to ‘achieve a monumental win’ at Villa Park, enabling their ‘vast number of travelling zealots’ to arrive ‘at their spiritual heaven buffer’ with the Villa Park Cup? Contains scenes of unprovoked violence on the achilles of Aston Villa defenders throughout.