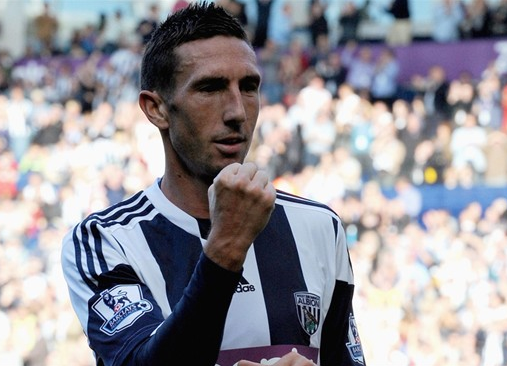 Let me cast your mind back to late September last year. The new Premier League season is in its infancy and West Brom are very much holding their own against Manchester United at Old Trafford. The away side are poised for a goal.

The ball is slotted out wide right, where a certain Morgan Amalfitano is waiting in the wings. He picks it up and runs, runs, runs and runs some more. Rio Ferdinand moves in for a block tackle but the quick-thinking winger nutmegs him before continuing into the box. David De Gea commits himself; Amalfitano dinks it over him and Albion take the lead.

Indeed, that was a very special moment in West Bromwich Albion’s history and further proof that the club had acquired a really promising midfield player in the shape of Amalfitano. Just several matches before, he had produced a wondrous strike against Sunderland which had some fans waxing lyrical over him already. This was a player who was on top of his game and showing the world what he was all about.

However, the Frenchman’s form has taken a massive dip over the course of the campaign and now he is spending most of his time on the bench. Having started off so brightly, he has seriously faded and doesn’t look half the player he looked at the beginning of the season. Just what has happened?

Amalfitano is only tied up on a loan deal having made the switch from Marseille in France in the summer. He arrived as a relatively unknown quantity, then-coach Steve Clarke making comments that he’d be someone who would plug the gaps and be a useful squad member. I attended the away match at Fulham where Amalfitano made his debut and he impressed. Alert, tidy and technical on the ball as well as defensively astute. He was a regular feature in the starting line-up until early December when he began to decline.

Since the home defeat to Manchester City on December 4, the 28-year-old has only managed two games where he’s been on the pitch for 80+ minutes (Newcastle at home, Southampton away). Before the City tie, he was regularly playing 90 minutes and looked the most likely threat to the opposition late on. At Crystal Palace last weekend, Amalfitano didn’t even make the 18-man squad. How quickly things change.

There are several reasons behind the Frenchman’s current situation. Other players in midfield have rose to prominence while he has somewhat stagnated. Stephane Sessegnon, James Morrison, Zoltan Gera, Chris Brunt, Saido Berahino, Nicolas Anelka and Matej Vydra are all players who can operate on the wings. West Brom have a large squad and the midfield area is arguably their strongest so it has been difficult for him to maintain his place. A change in manager has also contributed with Pepe Mel replacing Clarke, who took a shine to Amalfitano. Mel has stated he prefers Morrison and Gera and Brunt are the current wide players.

Maybe he hasn’t been training well enough in sessions? Has he lost the appetite for English football? Is he missing France and finding it hard to adjust to his current position in the team compared to a few months ago? Confidence is a major thing in football and Amalfitano looks short of it when he plays. The buccaneering runs, sumptuous crosses and boundless energy hasn’t been seen in quite a while. Albion have brought in reinforcements in his position and now he finds himself on the edge of the squad instead of built in. You could argue his turn in form isn’t exactly his own fault.

West Brom are allowed to decide whether they want to keep the player at the end of the season. Indeed, that may well depend on what division the club is but Marseille will reportedly want around £4 million. Is he worth it? Not really. The likelihood is Amalfitano will return to France, either carry on being a squad player for them or move on to a different club. I can’t see Albion splashing the cash to further keep him at the Hawthorns.

It just goes to show that five to six games is not definitive evidence to suggest a player is ‘complete’ or ‘ideal’. Many fans – including myself, admittedly – lauded the Frenchman’s talents in the season’s infancy but consistency is key. It’s a great shame the player hasn’t been able to sustain his early season promise for his performances against the likes of Sunderland, Manchester United and Arsenal were fantastic. The ball stuck to his feet, he glided past players and always delivered a telling final ball. Against Chelsea in the week, he must have misplaced about six passes. It’s a psychological hindrance as much as a physical.

Whatever Amalfitano does do in the summer, good luck to him. If his sensational chip at Old Trafford is all that Albion supporters remember him for, then that isn’t exactly a bad way to bow out.

6 thoughts on “The waning form of Morgan Amalfitano”