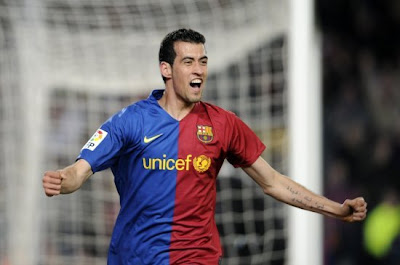 Of course, Vicente del Bosque was a footballer. And, despite spending the vast majority of his career in football on the opposite side of Spain’s great divide, he was like Busquets. Del Bosque didn’t create goals. He stopped them.

A union of necessity

Spain’s first World Cup-winning manager, a Real Madrid stalwart of many years, entrusted Barcelona to bring home the trophy. Catalan nationalists may grumble, but the occasionally awkward marriage of Los Blancos and the Blaugrana in the Spanish national team has at last created a large degree of unity through triumph. It is a fascinating combination.

The representation of Madrid and Barca was unbalanced in favour of the current champions, with the latter providing seven of the eleven starters in the final and their bitter rivals contributing just three. Villarreal’s Joan Capdevila stood alone as a red-shirted reminder of the remainder of La Liga.

A place for Fabregas

There were few murmurs of discontent at the majority of del Bosque’s decisions, despite the predictable English astonishment that Cesc Fabregas was not an automatic starter. Fabregas was revelatory in a dynamic role as a substitute, prompting many to question whether he should participate from the kick-off.

The Arsenal captain could not have expected inclusion in place of either one of Barca’s formidable duo Xavi and Iniesta, nor the impressive Xabi Alonso. David Villa’s place was secure and there was also a slot filled in turn by David Silva, Jesus Navas, Fernando Torres and Pedro Rodriguez. The final shirt, the one so many wanted stolen away and given to Fabregas, belonged to Busquets.

When Spain lost to Switzerland in their opening game, tiki-taka looked flawed. Pretty football, but no positive end product. Yet del Bosque retained his confidence in his two holding midfielders, if Alonso can be described thus.

Busquets certainly can. In a World Cup that can most adequately be described in one word as “pragmatic”, dual destroyers were ubiquitous. Holland infamously utilised Nigel de Jong and Mark van Bommel to great effect, while Brazil, underpinned by the defensive midfield duo of Felipe Melo and Gilberto Silva, seemed destined for glory until they were stifled by the Dutch.

And after that surprising defeat at the hands of the Swiss, the pressure was on del Bosque to do away with Busquets in favour of the creative Fabregas. In the end, ultimate vindication for the coach can be found in a lasting image of the final: the dangerous Arjen Robben skipping down the wing, pursued inevitably by Busquets.

The 22-year-old is obviously less showy than his lauded midfield colleagues at club and international level. Xavi retains possession as well as anyone who has ever played the game, while Iniesta’s darting, probing runs and incredible ability to pivot with the ball are bound to grab the headlines.

However, although they are anything but unreliable while not in possession, neither are particularly defensively-minded and nor would any right-minded coach want them to be. In order to get the best out of Xavi and Iniesta, not forgetting the almost equally superb Alonso, a spoiler is necessary.

Busquets has seen off the considerable virtues of Yaya Toure in Pep Guardiola’s affections, but still appears largely unpopular to the neutral. While this can partly be attributed to his unrivalled propensity to play-act, he has nevertheless garnered a reputation, certainly in England if not elsewhere, as the most expendable first-choice selection made by both Barcelona and Spain.

In truth, Busquets is the perfect modern defensive midfielder due to the increasing importance of positional discipline and retention of possession. Those two factors have been vital to the success of both Barcelona and Spain, with Busquets central to the seeming inevitability victory for either.

The latter is self-explanatory. With Xavi, Iniesta and Alonso at their disposal, Spain can expect to control every game they play, particularly given the preference of all potentially threatening opponents to play on the counter-attack. Germany tried and failed, Holland tried and failed. Brazil did not get the opportunity, but the likelihood is that they would have failed as well.

Spain’s ability to keep the ball lightens the load considerably on Busquets, whereas the likes of Sami Khedira for Germany, Nigel de Jong for Holland and Felipe Melo for Brazil have a mammoth task to fight for the ball and give it to their more attack-minded colleagues.

Busquets knows he will very rarely find himself in that situation. He can be confident that, once he wins possession, his gifted team-mates will keep it. Therefore, he does not have to concentrate on stifling attackers as much as most defensive midfielders do.

The young Spaniard’s primary concern is maintaining his positional discipline and ensuring that he is on hand to help his defenders when a counter-attack arises, hence that enduring picture of his reliable aid to Sergio Ramos and Joan Capdevila when the Dutch sought to break on Sunday evening.

Under-appreciation of Busquets on these shores will probably continue, but what will the English remember of the 2010 World Cup finals?

It should not be Robert Green’s error or Frank Lampard’s ‘ghost goal’, but instead the helplessness of Fabio Capello’s back four as Germany piled forward unopposed to rattle four goals past David James. Those tidal counter-attacks in a miserable second-round second half for England would have been quelled by a willing worker.

Even Xavi, Iniesta and Alonso lose possession sometimes, although admittedly on far fewer occasions than Frank Lampard and Steven Gerrard do.

But in that rare event, Sergio Busquets can lend a helping hand. One of two that are becoming increasingly accustomed to lifting the odd trophy.

11 thoughts on “The vindication of Sergio Busquets”