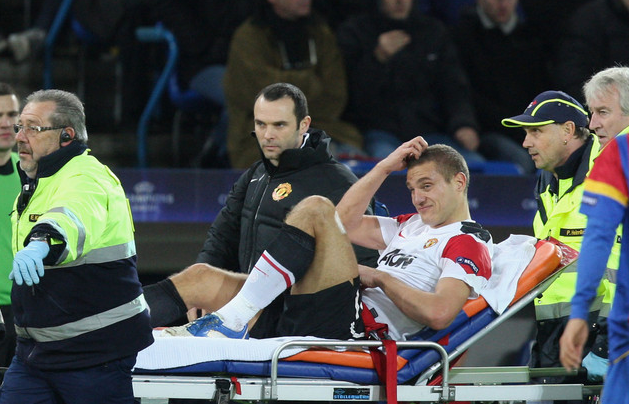 Manchester United fans were rocked by the news that club captain Nemanja Vidic would leave the club at the end of the season this week.

Whilst it is true that the big Serb’s form has been waning, his presence at the back has been an absolute ever present of Manchester United’s recent success, and he will be sorely missed.

The debate has already begun about Ne-man-ja want to replace him with (I’m not going to apologise for that pathetic attempt at a pun), with a host of names being banded around.

The bottom line is however, that there is a distinct lack of “Manchester United level” defensive talent on the market currently- so it appears that options may be somewhat limited.

However, I have managed to cobble together a list of four potential solutions to the problem caused by the departure of Vidic in the summer.

Of course, these are not the only available options for David Moyes, however, these four (or five) are in my opinion, the most suitable replacements for a character and player of the stature of Vidic.

So what have we got?

The first, and most likely option is for Manchester United to push the likes of Phil Jones and Chris Smalling into leading roles in the squad and fully establish themselves as first choice. Smalling has shown himself to be ample enough as a defender, offering relative pace and athleticism.

However, it is Phil Jones who I think could really become a stalwart at the back for the Red Devils. Jones originally struggled to settle on a position at United (and arguable still struggles with the same problem now), but the retirement of Vidic could provide Jones with the stability and game time he needs to finally fulfil his potential.

Another plus to this would be one not just for Manchester United, but for England aswell. Should Smalling and Jones be able to make the step up, this would bode well long term for Roy Hodgson and the England set up.

The only doubt in many United fans’ minds will be inevitably the question of whether or not Smalling and Jones have the raw talent to be able to fill Vidic’s boots. Only time will tell…

One of Europe’s most sought after and highly rated young talents, Eliaquim Mangala has been building himself somewhat of a reputation in recent times.

Plying his trade in Portugal for Porto, Mangala has been in sparkling form over the past two seasons and has firmly established himself as one of the world’s most promising players.

His most outstanding attributes are his physical ones, standing at a sizeable 6″2, Mangala possesses the pace and athleticism of a top striker rather than a centre back.

His size and presence make him a force to be reckoned with on the pitch. Despite being only 22, Mangala has approaching 150 professional games to his name (both for Standard Liege and Porto), and has made his debut for the French national team. A truly impressive prospect, rumour has it that Manchester City and United are locked in a tussle to land his signature in the summer.

Red Devils fans must hope that he joins the red half of Manchester, because Mangala could really be a force to be reckoned with in the Premier League.

There were whispers that Dante was in fact on the verge of joining United towards the end of the January transfer window, but predictably no move ever materialised. I would personally struggle to see why Dante would leave Bayern Munich, however the lure of the Premier League and the chance of a fresh challenge could tempt the afro donning Brazilian away from the Allianz Arena.

Despite a relatively average season thus far, Dante is still one of the worlds most recognised defenders and will command a starting place in Brazil’s World Cup XI in the summer.

Big, strong and predictably comfortable on the ball for a Brazilian, Dante also provides a large threat coming forward from set plays. This signing would provide genuine world class experience at the back and bring more balance to a Manchester United side that is very attack heavy its distribution of quality.

The drawback on this move however would Dante’s age. At 30, the centre back is very much approaching the winter of his career. Would United want to replace one ageing defender with another? Perhaps…

This one is a bit more of an alternative choice- nonetheless I believe that Dejan Lovren would make an excellent addition to the Manchester United squad. A man with Balkan heritage just like Vidic, the Croatian is currently plying his trade at Southampton after joining the south coast side in the summer from French giants Olympique Lyonnais.

Perhaps best know to United fans for scoring a late goal that won a point for the Saints at Old Trafford earlier in the season, Lovren has taken like a duck to water to the physical nature of the Premier League and can justifiably claim to be one of Europe’s most underrated defenders.

At the age of 24, Lovren still has his best years ahead of him- and he could fill the void left by Vidic quite capably. Lovren provides typical Balkan steeliness at the back, is hard in the tackle and reads the game excellently well.

He also possesses a hammer of a shot (for proof, YouTube his goal for the Croatian national side against Wales) and with over 20 caps for Croatia, has a wealth of international experience.

Despite joining Southampton for a hefty £8.5million in the summer, Lovren would be well within United’s price bracket, and I would argue could prove to be an inspired signing, should Moyes choose to consider him.

Who do you think will replace Vidic? Do you agree with my choices? Let me know in the comments below.