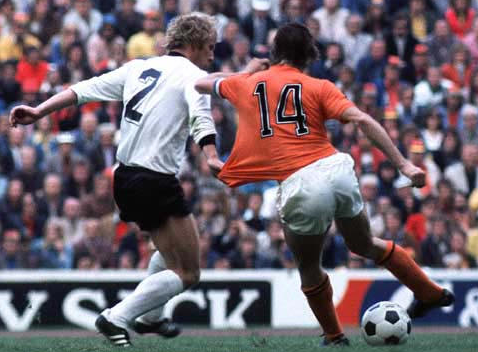 The match was kicked-off by the men in orange. They knocked the ball to each other. After seventeen consecutive touches involving seven different players, the deepest outfield player, number 14, darts forward from the half line towards the opponent box. The opposition players, yet to touch the ball, make their first notable contribution – illegally tackling number 14 inside the box. The resulting penalty was successfully converted. The buildup for the goal lasted for 54 seconds from the kick-off, while the ball was in the net within 108 seconds. At any level of football this is a perfect start, even more so in the biggest game on the planet!

Yes, the incredible start leading to the goal was seen in a World Cup Final, the 1974 contest between Holland and West Germany. Even more incredibly, after such a perfect start, probably the best in any World Cup Final, Holland ended up losing the game and thus, shattering the dreams of one of their best and innovative squads.

The goal remains memorable for many reasons. To start with, it provides a perfect example of the kind of football played by the ‘clockwork oranje’ in 1974 World Cup. Consider this – after initial ten touches, when the ball was being knocked among the back four, the centre forward and the chief creative force of the team, Johann Cryuff (number 14) comes all the way back to take the ball from Arie Haan, the centre back. Haan gives the ball to Cryuff and he himself moves up while Cryuff stays in Haan’s initial position. At the same time, the wing backs start pushing up, along with the other centre back Wim Rijsbergen. Thus, Cryuff, the creative centre forward, remains as the deepest outfield player, positioned just ahead of the half line, while the centre backs explore the opponent half. This move is a classic example of the kind of position switching encouraged by Rinus Michel during his reign of Holland and, before that, Ajax. This position switching along with pressing with an aggressive offline trap is what defined ‘totaalvoetbal’ or Total Football.

The philosophy or the style involved in ‘Total Football’ was developed during the late 60s by Rinus Michels in Ajax. However, the term came into practice after Holland’s exploits in the 1974 World Cup. Total football was radically different from the kind of football practiced in those days. In fact, Brazil legend Alberto Carlos once said:

The only team I’ve seen that did things differently was Holland at the 1974 World Cup in Germany. Since then everything looks more or less the same to me.

The term ‘Total Football’, as we can understand from the above described move, was coined to give the idea that in this style of play, a defensive player can join the attack and switch positions with an attacker, thus players are not outright specialists but possess qualities of both attack and defense. Of course, a defender spent less time in attack and an attacker spent less time in defender’s position. But when a player joined the attack, the space left by him would be taken by another player and thus a constant adjustment existed which made the system very fluid. In this particular example, Cryuff, after taking the central defender’s position, passed the ball to Rijsbergen, who initiated a built up in the left flank. During this time, Cryuff patiently waits as the deepest outfield player for Holland. Once, Rijsbergen was out of possession, he didn’t came back to his original defensive position, instead, he pushed forward. Haan, who earlier had moved up, also stayed in an advanced position.

Unable to find an opening, the ball was again passed backwards via Rijsbergen, and finally to Cryuff. Cryuff now darts forwards, seeing him come forward, Rijsbergen now moved backwards. The whole movement and the adjustments took place in an effortless yet efficient manner. Cryuff, during his forward movement, suddenly accelerated and bombed into the opposition box evading two German players and was fouled by Uli Hoeneß. Neeskens took the spot kick and converted it successfully. So, within 108 seconds, Holland were 1-0 up and the Germans could finally touch the ball!

The goal remained a matter of discussion in years to come. There are a few who even blame Holland’s defeat on this early goal. Football journalist David Winner, in his book ‘Brilliant Orange’, mentions that instead of going for another goal, the Dutch started playing taunting possession football without inflicting any damage. TV commentator Herman Kuiphof echoed the same saying

They had everything in hand and under control and they didn’t use that for scoring another goal…they were trying to humiliate the Germans.

Even some of the Holland team members feel the same. Johnny Rep, who played in that final, and Jan Mulder, agrees that one of Holland’s agenda was to humiliate Germans with their superior technical play. Van Hanegam, who had openly professed his dislike for Germans, had even said “I didn’t mind if we only won 1-0, as long as we humiliated them”. Wim Rijsbergen said “I think Nees (Neeskens) should have missed that (penalty). That early goal was the problem for us. I could sense a hesitation in the team.” Even the opposition captain, Franz Beckenbauer, felt similarly, saying “Going a goal down was good for us. The Dutch eased off and we were able to get into the match. And once you’ve relaxed your grip, it’s hard to recover the initiative.”

In this era from the 1950s through the 1990s the enemy for most European countries became Germany….Holland-Germany matches have provoked clashes between fans on the countries’ shared border.

Van Hanegam had even said that during the Second World War, 80% of his family died which evokes anger every time he plays against Germany. The fact that Germans continued to build ruthless result oriented teams probably fueled towards this emotion. Before winning against Holland, they had defeated Hungary in 1954 finals, Hungary with Puskas, Czibor and Kocsis were overwhelming favorites and had defeated West Germany 8-3 in the group stages. Germany, thus, remained the killer of beautiful football teams.

There’s more on the goal. In 1994, a play called De Reunie was performed in Amsterdam on 1974’s final defeat. David Winner says:

De Reunie elevates Holland’s goal and its preceding moments to a level far beyond football. The move leading to the goal is shown twice on a big screen at the back of the stage

In the first act, women chant player’s names like a hymn while at the end of the play the video is played with Bach’s St Matthew Passion, ‘Lord, Why Hast Thou Forsaken Us?’.

Holland along with their brand of ‘Total Football’ will forever remembered in football history as tragic heroes who despite bringing a revolution in football failed to win the match which mattered most. Holland’s goal in the final brings up the brilliance of their system and the complacency which haunts their football till now.

My interests are football tactics and football's adherence with local culture. I follow and write about mostly, but not exclusively, on Indian football. I have contributed in websites like Indian Football Network, The Hardtackle, The Rational Pie