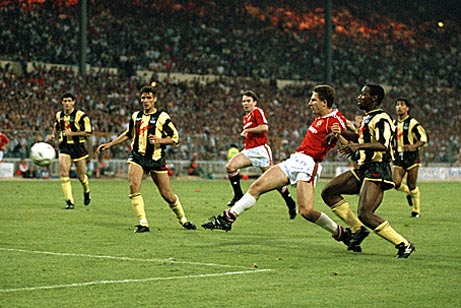 Ed Diggins picks the ten biggest moments of the past 26 years at Manchester United.

Things were turning sour for Alex Ferguson as the new decade of the 90’s dawned.

Three mediocre years at the club and fans were seeking his removal from the job. With a league campaign already written off  his only chance for salvation came in the form of the FA Cup of 1990.

The real drama was only starting however as United would first need a 114th minute extra time winner (again by Robins) to defeat Oldham in a semi final replay, before setting up a final date with Crystal Palace. Like the drawn semi this would end 3-3 in one of the greatest and most dramatic FA Cup finals in modern history.

Lee Martin scored the only goal in the replay the following Wednesday night and it bought Ferguson some much needed breathing space. For years it was believed that Robin’s third round winner was the goal that ultimately saved Ferguson’s job but former Chief Executive Martin Ferguson revealed yesterday that it was in fact the winning cup final goal that saved his skin.

Defeat in January would still have given Ferguson five months to turn the league season around, but ten days before the FA Cup final United lay in 16th position.

That cup run of 1990 was to turn out to be one that begun a remarkable chain of events in the history of Manchester United.

With the European ban on English teams now lifted United begun a trip into the unknown with Ferguson’s first European campaign as manager of the club. Eight undefeated games including trips to Hungary, Wales, Poland and France saw United reach the European Cup Winners Cup final on May 15th 1991 against Barcelona.

Two goals by Mark Hughes would decide the match and see United pick up successive trophies for the first time in 23 years. The taste of success was starting to grow on Ferguson as did the belief amongst the players. The plan was finally starting to come together.

While United’s trophy cabinet remained empty in the early years of Fergusons reign at the club behind the scenes the real jewels in the crown were emerging.

In mid May 1992 five years of hard work came to fruition when “Fergies fledging’s” as they become known won the FA Youth Cup. Containing Gary Neville, David Beckham, Nicky Butt and Ryan Giggs amongst others the team under the guidance of Eric Harrison beat Palace 6-3 on aggregate. The astounding fact however was that the majority of the team were underage for the again for at least another year of youth competitions.

Very few people realise that the dream team of Scholes, Butt, Beckham, Neville along with Gillespie, Irving, Thornley and co actually lost heavily over two legs to Leeds in that 93 decider but Ferguson had seen enough…these guys where the future.

United had gone close twice in bridging the 26 year title wait in Ferguson’s first six years at the club but something was missing. With new signing Dion Dublin out for most of the season with a broken leg, Ferguson needed a cutting edge, somebody who could bring class, creativity and excitement to the team.

A chance phone call to the then Leeds manager Howard Wilkinson ended in one of the most remarkable, yet telling transfers in the history of the club. On the 27th of November 1992, Eric Cantona became a Manchester United player in a £1.2million transfer which shook football. The final piece in Ferguson’s first United jigsaw was complete. 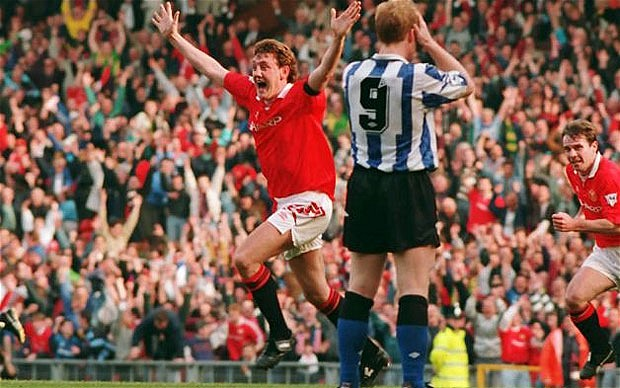 One of the most extraordinary moments in Old Trafford history. The United title charge had started to stagnate and painful memories of the collapse of 92 were becoming real again with four successive games without victory in March.

Sheffield Wednesday were the visitors to Old Trafford on that faithful day of April 10th, 1993. Trailing to John Sheridan’s penalty and entering injury time, Steve Bruce’s long range header looked to have salvaged a point.

An injury to referee  Mike Peck however meant seven minutes of injury time remained and in the dying seconds, Bruce knocked in Gary Pallister’s cross with his big Geordie forehead to spark scenes that will probably never been seen again inside the ground. It put United back on top of the table and they went on to win the remaining 5 games picking up title number eight and ending a 26 year wait.

The great famine was over, the pressure was off.

To say Ferguson showed his balls in the summer of 1995 is an understatement. The team had just lost the title on the last day to Blackburn and Eric Cantona was in the middle of an eight month ban.

What did he do? Sell three of his senior players in Mark Hughes, Paul Ince and Andrei Kanchelskis but not sign anybody in return. Instead he promoted half the aforementioned youth squad of the early 90’s and put them straight into Premier League action against Aston Villa on the opening day of the 95/96 season. United lost 3-1 and prompted one of the most infamous predictions in recent football history by match of the day analyst Alan Hansen.

“At 2.15 today when Aston Villa seen that team, it would have given them a lift and that is going to happen for every game. I think they have got problems, he needs to buy players. You cant win anything with kids”, said Hansen.

Ferguson completely ignored him and United went on to win eight of their next ten league games, beating champions Blackburn at Ewood Park in the game that announced the “kids” had finally arrived. Once Eric Cantona returned the team was in full swagger playing the best football seen for many years around Old Trafford on the way to Ferguson’s second double in three years. The rest as they say is history. 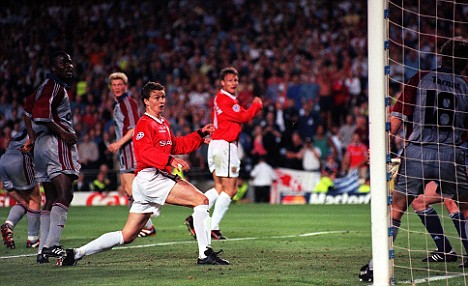 The season of defining moments, so much so that we could pick ten alone from it.

Winning back the title on the last day of the league season was enough in itself. Capturing Ferguson’s third double with an FA Cup win a week later against Newcastle was another great achievement.

However, the crowning glory of Ferguson’s United career took place on Wednesday May 26th 1999 in the Nou Camp Barcelona in the final of the Champions League. Two injury time goals saw United beat Bayern Munich 2-1 in one of the most dramatic conclusions to a game of all time to end a 31 year wait without European Cup success. Once and for all the link of Fergie’s Fledglings to the legacy of the Busby Babes and the memory of Munich was cast in stone.

At 1-1, Ferguson’s assistant Steve McLaren told Ferguson to change the formation and prepare for extra time. Ferguson was having none of it, “this games not over yet Steve,” he said.

The season of 99 is the one in which defined the legacy of Sir Alex Ferguson. From the injury time goals against Liverpool in the FA Cup, to the Giggs winner in extra time against Arsenal, this had it all. And more.

April 5th 2009 was the day that summed up Ferguson’s reign down to a tee. It had been the two weeks from hell for United fans, a 4-1 defeat to Liverpool was followed up with a 2-0 turnover away to Fulham. Injuries and suspensions were mounting and as United’s premier league game with Aston Villa entered the final stages, Villa held a 2-1 lead.

In typical Ferguson fashion he sprung unknown 17 year old striker Federico Macheda off the bench and it was the young Italian who would score a 93rd minute winner in front of the Stretford end.

It would turn out to be the pivotal moment of that seasons title race and become one of the most famous goals in the past 20 years at the club. The kids had delivered once more, Ferguson’s gamble had paid off. 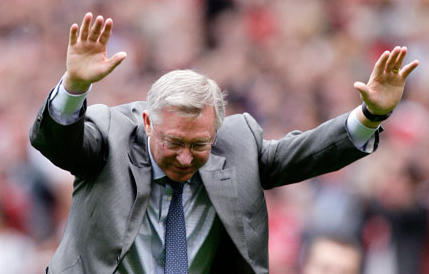 When the dust settles and people start to look back on Ferguson’s career, this image from Sunday the 8th of May 2011 will be one of the defining ones of his tenure. Chelsea had come to old Trafford 12 months previous and taken United’s title. Mumblings were growing that after Ronaldo and Tevez leaving, United were a team in decline and Ferguson’s days as a title winning manager were at an end.

Ferguson however rarely lets lightning strike twice and on this day, United would triumph 2-1 in one of the most charged and intense atmospheres Old Trafford had ever witnessed. Seconds after the final whistle, Ferguson stood in front of the Stretford end to acknowledge this and bowed gracefully.

This was the day title 19 was essentially sealed, this was the day that once and for all, the f*cking perch holy grail was achieved. A 1-1 draw with Blackburn six days later would confirm it.

For a brief moment on Sunday May 13th 2012, Ferguson had believed that United were about to be crowned champions for the 20th time. Sergio Aguero’s injury time winner however would see Manchester City snatch the title in the last seconds on goal difference.

How did Ferguson react? German player of the year Shinji Kagawa would arrive quickly, followed by perhaps the biggest statement of intent in Ferguson’s reign as United manager – the signing of Robin Van Persie.

Van Persie would become the catalyst for a season in which United would sweep all before them on route to the Premier League crown, amidst a determination from Ferguson that echoed throughout the team.

“That will never happen again, I guarantee you that” he said…how right he was.