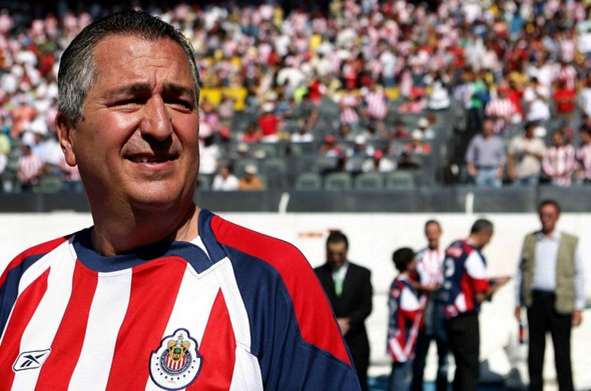 Since their inaugural season in 2005, Chivas USA – nicknamed “the Goats” – have never really looked like becoming a truly stable part of Major League Soccer, and this week American network HBO plunged the Los Angeles side even deeper into the mire.

On Tuesday evening, HBO aired the July edition of ‘Real Sports’ in which journalist Soledad O’Brien dug into the controversy which has been bubbling beneath the surface for a while now – Chivas USA’s hiring practices.

In the last year alone, 17 non-Mexican players have been shown the door at Chivas. A team which had a mere three Mexicans in its ranks in 2012 is now dominated by the nationality, as they attempt to emulate the successes of their “big brother” club, Chivas Guadalajara. Guadalajara, a Mexican league team who boast the likes of Javier Hernandez and Carlos Vela as alumni, is famed for being the only team in the league to exclusively field Mexican players, and when Jorge Vergara acquired the club he made clear his intentions to expand the Chivas brand in any way possible. He did so by creating an MLS franchise, Chivas USA, which was very much supposed to be the “little brother” of the beloved Guadalajara. His mission to mirror his Mexican club in America has stepped up a gear in the last year or so and has, unsurprisingly, garnered attention.

The HBO exposé highlighted two former Chivas academy coaches, Teddy Chronopoulos and Dan Calichman, who are suing the organisation for wrongful termination and discrimination. Both coaches allege they were called into separate meetings with the club’s president, Jose David, and informed that Chivas USA was going “back to its roots” and there was “no place” for them anymore. Moreover, the coaches claim David had praised their technical ability and even clarified to Chronopoulos that his dismissal was not performance related whatsoever. A week later, both men received termination letters from Chivas which cited “unprofessional conduct” and “creating an unsafe working environment” as reasons for their removal.

Alas, that is just the tip of the iceberg. Not only have claims come from the management levels of the club, but also from parents of the academy players themselves. It transpires that a questionnaire was sent out for players to fill in upon joining the team, which asked for details of parental origin. Many feel that the request for this information was unnecessary, sinister even, but Chivas USA’s director of soccer, Francisco Palencia, uncomfortably described it as “just getting some information” when asked in an interview that he later walked out on. His defence was corroborated by an official Chivas USA statement released in the wake of HBO’s feature, flatly denying the allegations.

Nonetheless, what’s important is how this latest controversy might affect the bigger question of Chivas USA’s place in MLS.

To put it lightly, they have endured a topsy-turvy existence thus far, with 10 head coaches in the past eight years. The decision to launch another South Californian team was met with some scepticism back in 2004 and the initial hesitance has proven to be justified; they have no local television broadcast deal, attendances have been consistently poor relative to the league average and they continue to share a stadium with the Los Angeles Galaxy. Well, some of it – the StubHub Center’s capacity is downsized by roughly 12,000 for Chivas matches with whole sections cordoned off to “provide a more intimate atmosphere”.

Indeed, these problems are probably both causative and symptomatic of how Chivas USA have fared on the pitch. Since joining MLS in 2005 they are yet to progress further than the Play-Off quarter-finals, and have been one of the league’s worst two teams for the last three years running. In perhaps the only laughter-inducing moment of the HBO broadcast on Tuesday, Francisco Palencia absurdly claimed that Chivas’s numbers are good this year (they are currently dead last in the Western Conference). Their struggles on the pitch form part of a damning cycle: poor results leading to poor attendances and poor television coverage, leading to poor revenue, leading to a lack of capital investment in the squad. Wash, rinse and repeat.

However, Chivas’s woes potentially stem from something far deeper and much harder to rectify – the very foundations on which the club is built. The gap in the market that they originally set out to capitalise on was the Hispanic community in America. They expected Hispanics everywhere to embrace the team. But the associations of Mexican nationalism with the Chivas brand put off much of their target market, not to mention the fact that those who supported one of Chivas Guadalajara’s rivals back home would never even consider supporting its American lovechild. At the same time, their decision to market exclusively to Mexicans alienated almost everybody else. In their middle years they were more open-minded (which saw them have some mild success, both on and off the pitch) but they have ultimately lacked any meaningful stability.

And this week’s exposé serves to highlight (in the mainstream media, no less) the extent of Chivas USA’s problems.

Spare a thought for some of the biggest victims of its ill-management: the fans. Not just the valiant, albeit numerically limited, Chivas supporters who continue to do everything in their power to prop up the club, but also fans of football in general; a big red cross on the expansion record of MLS is a deterrent to potential investors. Chivas USA is not yet at the point of no return, but the signs are ominous.

At this stage, Chronopoulos and Calichman’s lawsuit against their former employer is ongoing, and I am neither qualified nor well-informed enough to speculate as to the official legality of Chivas USA’s hiring practices. For all their bad press, it may turn out that the allegations are false and what they are doing is technically within the letter of the law. Indeed, defenders of Jorge Vergara’s regime might look to Athletic Bilbao and “older brother” Chivas Guadalajara as precedents – clubs renowned for their strict recruitment policies whose traditions seem to have trumped the law in many ways.

Nevertheless, what the allegations do undeniably is draw attention to the dark, thorny path down which the club is being led. A picture is painted of Chivas USA as a club ruthlessly trying to force a square peg into a round hole and, if their current progress is anything to go by, continuing to do so could have disastrous consequences. In years to come, we may see this week’s exposé as the straw that broke the camel’s – or in this case, the Goats’ – back.

2 thoughts on “The straw that may break the Goats’ back”