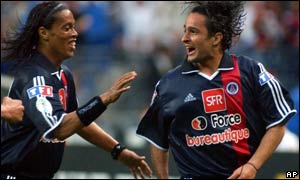 Against the expectations of many, the talented Hugo Leal has resurfaced in the country’s newspaper headlines after a round-about career through the back-roads of Iberian football.

Born near Lisbon, Leal started his career at Benfica, making 27 first team appearances for the Eagles in 1998-99. He had also enjoyed a brief “toughening up” period out at Alverca, Benfica’s feeder club and a fellow top division club in those days and seemed earmarked for greatness. All seemed set fair for Leal, a classy touch player with an eye for the killer pass. He even weighed in with a handful of goals in that first breakthrough season.

It began to turn sour for him at Benfica, however, as first team opportunities dried up and he made the first of several ill-judged and ill-timed transfers, moving on for a first stint across the border in Spain. He chose the unstable Atletico Madrid as his next home. This proved to be a disastrous decision, joining at a time, even by Atléti’s prodigious standards, that was turbulent and on the verge of spectacular and resonant failure. Sure enough his first season saw the team sink to the segunda liga, a plight as desperate as it was embarrassing for Madrid’s second team. To top things off nicely, Leal’s only goal of the season, in a May home draw against Sevilla, was accompanied by a red card. Leal stayed for another season, remarkable only for Ateltico’s spectacular inability to climb back out of the second division, despite Leal becoming something of a regular starter and , for him, scorer (36 games, four goals).

His next move was also a popular one for Portuguese footballers, but not one designed to bring stability to a footballer’s career, moving north to join PSG, in a city known for its huge Portuguese immigrant community and a flagship club with a penchant for drama. Two cup final wins in consecutive years added sugar to a career path that had been in danger of turning a little sour, but he made fewer and fewer appearances and was gradually forced out. Deciding the time was right to move back to his homeland, he landed on his feet, snapped up by FC Porto. Six short months later, he could be seen wearing the black shirt of Academica de Coimbra. If not exactly in mourning for a career seemingly in terminal slide, it was certainly a period for sombre introspection as a 4th major club had got rid of him after a relatively short space of time. Release by Benfica, Atletico Madrid, PSG and Porto begins to make a mess of your CV.

By 2005 options seemed to be running out for Leal. He signed for Braga, but left again by mutual consent just over a year later. He had only managed 17 league appearances in his time in the Minho. An injury-ravaged year at Belenenses followed, before joining newly promoted minnows Trofense for their one year in the limelight (2007-08), a season remarkable only for their failed fight for survival.

After resurfacing in the Spanish second tier with Salamanca, many presumed that Leal’s penchant for playing the journeyman would now see him continue his career in this flighty, unfulfilling manner, but, at the grand old age of 30, he has returned once again to the fold and is this season turning out for Vitoria de Setubal, perennial top flight strugglers, but a club with a heart and the occasional will power to achieve above their status.

In the latest round of games in the Portuguese Superliga, Leal snaffled a goal of some beauty (a one two with Miguelito and a cool finish) to help his side beat the supposedly much stronger northern visitors from Guimarães. Leal’s withdrawl in the second period clearly destabilised the home side and was the best indicator possible that he can become a fulcrum to this Vitoria side in 2010-11. Is this the start of a new lease of life for a player, who has underachieved for such significant amounts of his career? Only time will tell.