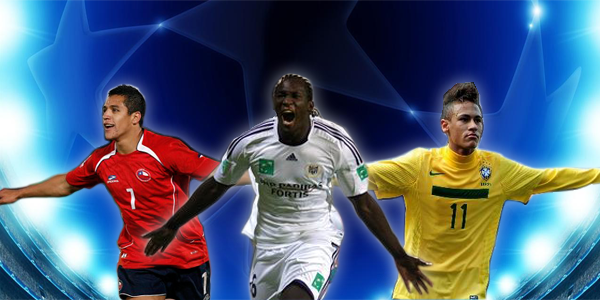 If yesterday’s five players to watch weren’t enough to give you a superiority complex down the local then we’ve another set for you to commit to memory today.

There’s a bit of a South American feel to this bunch with a couple of Europeans thrown into the mix just in case as we all know that variety is the spice of life.

Time to read on…

The epitome of an attacking midfielder. Tall, combative, blessed with phenomenal technical ability and a deceptive turn of pace all give Pastore the platform to make himself into a leading European midfielder over the next decade. Typically found playing at the tip of a midfield diamond with a licence to roam, Pastore’s 14 goals this season have helped propel Palermo to a Coppa Italia Final that has already guaranteed them a Europa league place next season despite only being able to achieve a league finish of seventh place. He is all but guaranteed to finish the season as the Rosaneros top scorer and Player of the Year. His inventiveness and quick thinking would be an asset to any team and his robust frame would surely even please the ‘Couldn’t cut it at Stoke on a cold Tuesday in December’ Brigade were he to make the move to England. After his performances this season it is highly doubtful that the beginning on the 2011 season will see Pastore in the pink of Palermo if the rumours that both Barcelona and Inter Milan are interested in his services are true.

If asked to describe Sanchez in one word it would be ‘explosive’. Since returning to Udinese from a loan spell with River Plate at the beginning of the 2008 season Sanchez has become a key player at the Stadio Friuli. His pace and bulldog like physique and approach to the game have seen comparisons drawn between himself and Carlos Tevez in their style of play. Sanchez was originally deployed on the right wing where he struck up an almost telepathic understanding with fellow Chilean Mauricio Isla. However after the departure of Fabio Quagliarella to Napoli at the beginning of the 2009 season Sanchez was more often deployed up front alongside Antonio Di Natale and had a slightly disappointing season trying to adopt to this new role. This season his goals for the Bianconeri and his partnership with Di Natale up top has helped propel the club to a top four finish in this year’s Serie A and a spot in next season’s Champions League. With a host of clubs interested in his signature including Barcelona, Liverpool, Manchester City and AC Milan and a chairman who has said he’s willing to sell this summer if the price is right, expect to see Sanchez dining at Europe’s top table next year. Indeed just a  few weeks ago Udinese confirmed that they turned down a bid of just under thirty five million euro from an unnamed club for the Chileans signature and with the interest from Barcelona looking more concrete as the days go by it looks like Sanchez will be strutting his stuff in an already terrifyingly potent front line for the Catalan giants next year.

The next big thing coming out of Brazil plays for Santos, Neymar has confidence positively radiating off him and one of the dodgiest haircuts I’ve seen on the football pitch since Ronaldo in the 2002 World Cup. A boy with so many stepovers and tricks he puts Cristiano Ronaldo to shame. Of course Ronaldo provides much more end product but let’s not get that in the way. After tearing defences to pieces in Brazil during the 2009 season, scoring a whopping 42 goals in 60 appearances, Neymar announced himself to the world of football, and in particular, Europe’s big guns. Having already had bids of twenty million euro plus turned down from Chelsea last year it is clear that Santos realise they have a potential superstar on their hands and are determined to get top dollar for him.

Neymar’s combination of blistering pace, clinical finishing and super fast footwork make him a thorn in the side of any defense as he can hold the ball up with his back to goal as well as run the channels tirelessly and has often been compared to Robinho. Aged only 19 though there is question marks over whether the time is right for him to leave his homeland to move to Europe. There is always the fear that he will meet the pitfalls of homesickness, loss of work ethic or the love of a few quick pints that have slowed or ended the careers of players such as Adriano, Ronaldinho and Deco on the continent.

Personally I think the 2011 season might be a year to early for this prodigious Brazilian wonderkid but I wouldn’t be surprised to see one of Europe’s big hitters take a chance on tapping his unparalleled potential.

Rounding off our Belgian triumvirate is powerhouse striker Romelu Lukaku. One look at him is enough to let you know why this young talent, regularly referred to as ‘the next Didier Drogba’ is considered one of Europe’s hottest prospects. Standing over six foot three and looking not too far off that wide, the Belgian forward is a battering ram that can hammer defences into submission. Like Drogba though, his game is not all just about sheer physical strength, he has a deft touch that belies his towering frame and as much as it pains me to use such an irritating cliché: ‘good feet for a big man’...I feel dirty.

Previous concerns that his quick physical development, which allowed him to dominate teams at youth level, meant his technical ability wouldn’t develop as well as it should were put to bed as soon as he start playing regular first team football. Since elbowing his way into the Anderlecht first team at the start of the 2009 season Lukaku has gone from strength to strength and has attributed 39 goals in 95 games for the Belgian Super League outfit and finished the leagues top scorer in his debut season.

A Chelsea fan who has been pictured wearing a Blues jersey, it would seem an obvious destination as Drogba’s successor. However there are plenty of other teams interested in the Belgian and he certainly won’t be allowed to leave on the cheap.

I do not think too many would disagree that Dortmund were the surprise package in Europe this year. The extremely young side took the Bundesliga by storm and romped to a convincing German Championship win, seven points ahead of their nearest challengers. The prime forces of this victory were the likes of Neven Subotic, Shinji Kagawa before his injruy, Lucas Barrios and recent Real Madrid acquisition Nuri Sahin. However outshining them all is what looks to be the next Golden Boy of German football, Mario Götze. The impish attacking midfielder put in dazzling display after dazzling display for The Borussians and showed a maturity and calm head that belied his age. His versatility allows him to play anywhere across an attacking midfield line up, his pace and athleticism means he is more than able to play wide but when played centrally his close control and superior technical ability comes to the fore. His quick thinking and seemingly birds eye view of the  pitch allows him to function ‘in the hole’ with supreme confidence, threading passes through the eye of a needle that most of us wouldn’t even know were there. With Sahin already departing it seems that Dortmund are more than willing to sell and Götze certainly won’t lack suitors if he is made available. A return of only eight goals this season may seem measly to the stat junkies out there, but anyone who watches the young German play will fully appreciate his impact on any game.

Part 1 went up yesterday so have a read if you missed out first time round!